When I visited Doris Salcedo's memorial to victims of Colombia's conflict, I walked eagerly onto the property on Carrera 5 a block south of the Casa de Nariño. Salcedo created her tribute to the victims, particularly women who suffered sexual violence, out of tons of weapons the FARC guerrillas turned over as part of their peace agreement with the government, and which were melted down into brute metal.

For the memorial site, organizers found a centuries-old house whose adobe walls and columns have
slowly crumbled away in the rain and wind. Interestingly, they preserved the ancient house's remains, which itself seems like a haunting reflection on Colombia's long tragedy.

I walked into the building's hall, which led to what seemed to be an exhibition room. But the room was completely empty, except for a few other visitors standing around chatting. Confused, I headed up to the second floor, only to find that except for some first aid supplies, this room was empty too.

Feeling cheated - even tho entrance is free - I asked other visitors why Salcedo's promised artwork memorializing the victims was not to be found. They looked down: "The artwork is the floor," one told me.

In fact, Salcedo had used the tons of metal from the melted guns and other weapons to make the exhibition hall's floor. Her idea was to create a 'counter-monument,' an exhibition guide told me. A 'counter-monument' does not project the sorts of preconceptions which a regular monument would, she explained.

That's all well and good. And it's also true that making the weapons into a floor carries symbolisms -

the emptiness of the rooms could represent the losses from violence; with each step in the exhibition, we're trampling on those weapons. Even the old adobe building's decaying state might symbolize the peace agreement's only partial success. Etc.

But I suspect that an unsophisticated peasant from Santander, El Chocó or Putumayo whose relatives had been tortured, disappeared and driven from their homes by armed groups, and who herself had been violated, might not appreciate these lofty, abstract artistic sentiments. She'd look for a concrete representation of Colombia's tragedy.

Colombia, it seems to me, needs something like Washington D.C.'s low, haunting, Vietnam Memorial, or Berlin's headstones commemorating the victims of the Nazi Holocaust.

But maybe not yet. After all, Colombia's conflict is still unresolved. A substantial proportion of the FARC's fighters refused to demobilize and are considered 'dissidents.' And the ELN and myriad narco-gangs and other groups remain out there causing havoc and violence.

Colombia's violence, sadly, is far from over.

The FARC's weapons and the United States:

Notably, some of the FARC's newest and most potent weapons had been purchased in the United States - the same nation which has spent billions of dollars trying to defeat Colombia's leftist insurgencies. Similar to Colombia's illegal drug industry, which the U.S. both combats and finances, the U.S. is on both sides of the guerrillas weapons-wise: it pays the Colombian government to battle the guerrillas, while supplying those same guerrillas with weapons to fight the government and terrorize civilians.

The story never changes: Just wait, and Bogotá will have clean air (and a clean river). But whether
it's five, ten or fifteen years away, that dream never feels any closer.

But, even assuming that the politicians actually stick to the plan, the dirty old buses we have now will stay on the road. And, meanwhile, the city will fill up with many thousands of additional cars and other vehicles, whose pollution will add their poison to the air.

Why don't authorities try something novel and different? Penalize those rolling chimneys we see belching away unmolested every day?

Scenes From The Armed Conflict


Jesús Abad Colorado is Colombia's most distinguished documentary photographer, particularly of the country's armed conflict. And it seems to me that his work lives up to the term 'documentation,' because he documents all parts of the conflict's tragedy and anguish.

Leftist guerrillas; right-wing paramilitaries; the regular military - all have committed terrible crimes, which Colorado documents impartially. Perhaps this characteristic is in his blood, as his family story carries scars dealt from all sides.

During Colombia's La Violencia period paramilitaries murdered his grandfather and a child. Colorado's grandmother stopped eating out of sadness and died a few months afterwards. In more recent times, one of his cousins was disappeared by the military, another cousin was kidnapped and murdered by the FARC guerrillas, and the guerrillas have kidnapped Colorado himself - twice.

An exhibition of Colorado's work, called Testigos, is on now in the Claustro de San Agustin in La Candelaria.

If you go by bike, however, be forewarned: Even tho the Claustro is part of the Universidad Nacional, whose campus is full of bicycles, the Claustro has no bike parking. You'll have to leave it in one of the commercial lots on Carrera 9. 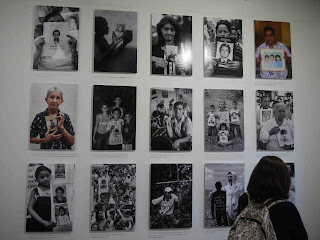 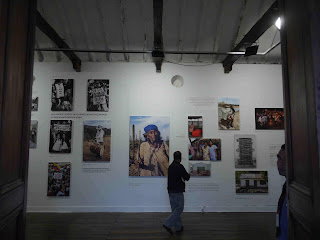 A Radical Makeover for the Trash Museum

The Teusaquillo neighborhood's Museo de la Basura, or Trash Museum, used to look like this: 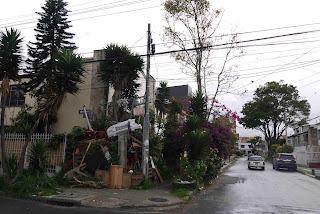 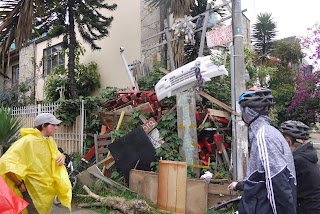 With its constant denunciations of our human mistreatment of the planet.

Of course, the house's owner, Antonio, was correct. Today's headlines about how we're charging down the road to permanently destabilizing the planet's climate, and the accelerating pace of things like deforestation and coral reef destruction prove it.

But few people care enough to do anything about our planet. Except for Antonio, who filled his house and yard with garbage while he stayed inside drinking. Perhaps his 'environmental' campaign was no  more than a justification for never cleaning up, but at least it served as a reminder that the evidence is that we're heading towards calamity.
But after Antonio died some months ago his brother, who evidently does not share the same environmenal commitment, cleaned the house up. The change was undoubtedly a relief for the neighbors.Their  property values rose and they can more easily ignore the fact that the planet is careening towards disaster. 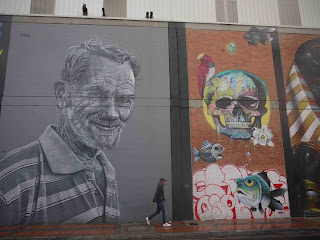 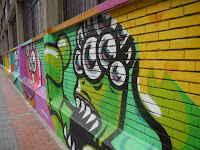 Recently, the city sponsored these huge murals on warehouse and factory walls in the otherwise very gray and gritty Puente Aranda neighborhood. The murals, which line two streets near the Carrera 53 Transmilenio station - and which we visited during a street art bike tour - transformed the neighborhood's atmosphere.
A graffiti artist friend told me that because Mayor Peñalosa is disliked by the artists' community, some of them did only their second-best work here. But the paintings looked fine to me!
Ironically, however, the neighborhood residents walking by the murals ignored them, perhaps because they passed by every day. And these are yet another example of Bogotá's best street art - like those beside the bullfighting stadium and the ones behind the Central Cemetery - located in out-of-the-way sites where few people see them, unless they go out of their way. 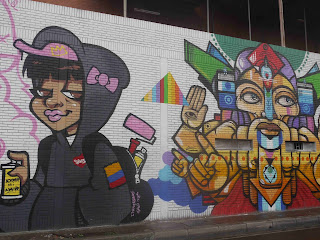 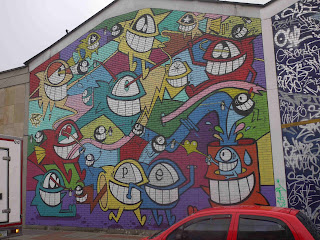 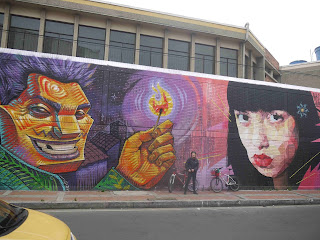 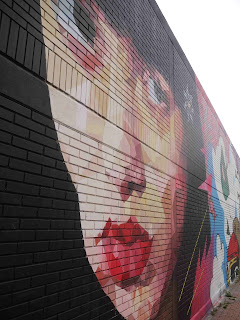 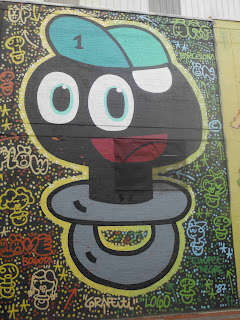 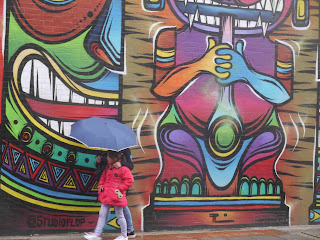 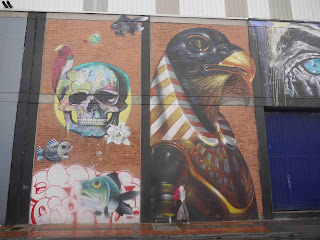 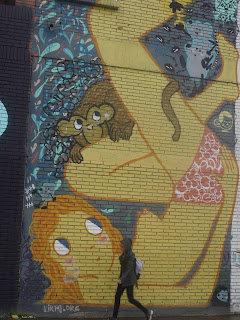 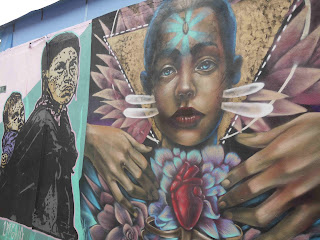 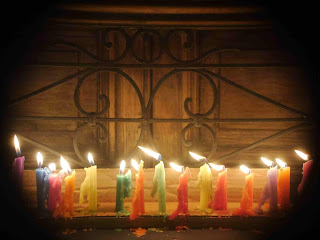 The Noche de las Velitas, or night of the little candles, is an annual celebration marking the start of the Christmas season. People light candles on sidewalks and windowsills. But it's also a time for families to sit in the street and talk with each other and neighbors. 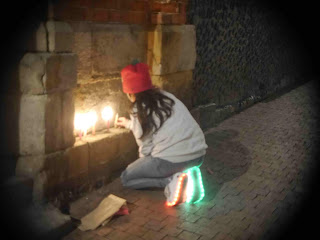 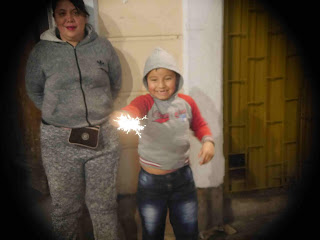 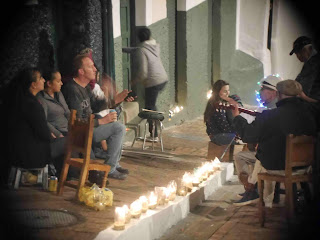 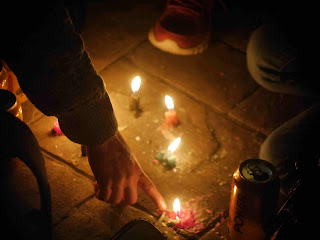 The velitas tradition is particularly strong in La Candelaria, Bogotá's historical center. However, it seemed to me that this year I saw lots fewer candles lit than in previous years. Is the tradition waning? 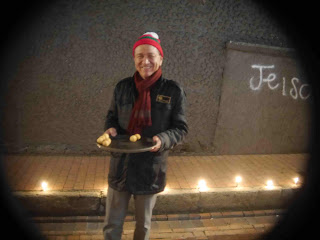 Gustavo Petro is generally remembered as a poor administrator as mayor of Bogotá, and he lost badly when he ran for president. But he has at least been generally known for his probity and for having ideals, whether you agree with them or not.

However, those positive qualities are now under siege these days due to a decade-old video released by his political enemies in which Petro is seen receiving wads of cash of uncertain origin.

As Petro has repeatedly pointed out, receiving wads of cash isn't illegal. But it does looks bad, because it's how people like Pablo Escobar and innumerable corrupt politicians handle their finances, and so requires an explanatio: 'The money came from my mother'. 'I had dug the money up on my ranch.' 'A supporter gave it to me.'

In fact, Petro did offer a simple explanation: He claimed that the cash was a donation from prominent arquitect Simon Velez, who reportedly does not like using banks. But Velez quickly issued a statement flatly denying having given or loaned Petro money. El Tiempo also reported that the other two people who appear in the video along with Petro received city contracts. That's not necessarily illegal, either, but it does look very bad.

Petro counterattacked by charging that the video was illegaly leaked by his enemies to distract attention from their own corruption scandals. That's probably true. But whatever the video's origin, that doesn't change its substance.

A lot of people, including me, who thot Petro was a disappointing mayor, had held on to faith that he was at least personally not corrupt.This was despite indications to the contrary, such as the multiple, huge bike parking racks installed on Plaza San Victorino during the last months of his mayoralty - even tho few people ever park bikes on the plaza. Those huge new racks, which quickly turned into seats for street vendors, were very likely the result of a sweetheart contract given to someone with city hall connections, who handed over wads of cash to pay for the privilege of getting a contract to install useless bike racks.

In the same way, bribery can waste public funds, cause governments to build unnecessary, disfunctional roads, purchase overpriced, useless medical equipment and even kill people. And, by undermining faith in the mainstream parties, corruption makes extremists such as Venezuela's Chavez and Brasil's Bolsonaro look more attractive - potentially leading their nations toward disaster.

And corruption has a poisonous effect on democracies. A recent poll found that Latin American support for democratic systems is at a low point, with fewer than half of the public giving democracy their full faith. A big part of the reason for that is the pervasive corruption, and Petro's unexplained cash only deepens that perception.

That's all we need, Mr. Petro, is a clear, verifiable explanation of those bills' origin. But every day that we wait for that explanation in vain adds to the perception that that was dirty money.