Can Bogotá Win the 'War Over the Penny'?

La Guerra del Centavo, or The War Over the Penny, likely costs more lives in Colombia than does its armed conflict between guerrillas, the military, paramilitaries and narcos, and sometimes it's just as dramatic.

But this war involves buses, not guns or explosives.

Bogotá's is still a mostly private, very loosely regulated bus system. Many of the city's buses belong to owner/drivers or to people who own just a few buses. Others belong to politically powerful businessmen who own fleets of buses and use their influence to ensure that pollution and other inconvenient laws aren't enforced against them.

What this all produces is a chaotic, dirty and dangerous bus system, as well as the 'Guerra del Centavo.' Since most bus drivers get paid a percentage of the fares they collect, their incentive isn't to provide good service, but to carry as many people as possible - whether quickly, slowly, safely or pleasantly, doesn't matter to them. That's why you have buses charging to pass each other, stopping in the middle of intersections to pick up passengers, waiting unreasonable lengths of time for one more passenger, etc etc.

Sure it's convenient to be able to step off of the curb and have a bus stop for you in mid-block. But that's no good for traffic or an efficient way to run a transit system, as you'll realize as that same bus proceeds to stop every few dozen meters to pick up another fare.

The existing, barely-regulated system also gives owners incentives to keep using any bus whose income exceeds its costs. That means there are too many buses, and many inefficient, pollution-belching, decades-old tanks continue congesting Bogotá's avenues and blackening its air.

This week, Bogotá signed contracts with private companies to create an Integrated System of Public Transit (SITP), which is supposed to bring us rational and efficient routes, newer, cleaner buses, and a more efficient city transport system all around. It should also be much easier for the passengers, who'll pay a single fare to use the buses, Transmilenio and an eventual metro system.

Yes, the plan isn't perfect. Ex-Mayor Enrique Peñalosa says it requires too many transfers - an aspect meant to generate more revenues for the bus operators. Others say that the bus companies, by staging a city-wide strike, were able to extort more than their fare share of revenue. But certainly it can be improved. And, undoubtedly, it'll be an improvement on the existing system. Almost anything would be. 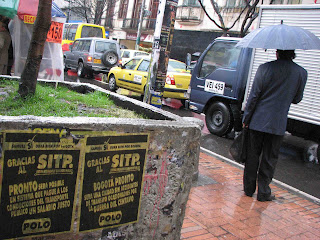 'In Bogotá it will soon be possible to pay public transit drivers a just salary.' 'Bogotá will soon be a city without transit accidents caused by the 'War over the Penny.'' Let's hope so. And that the traffic jams and the pollution go away, too.

Hey Mike, I am a Stanford student who won a prize for an essay on Transmilenio. I want to write to you to ask permission for the use of the image on the "War of the Centavo" to which you hold the rights. Where should I contact you to give you more information?

Hey Mike, I am a Stanford student who won a prize for an essay on Transmilenio. I want to write to you to ask permission for the use of the image on the "War of the Centavo" to which you hold the rights. Where should I contact you to give you more information?