The World's Biggest Emerald - or Not

It's a really, really big green stone, and it's said to be the world's biggest emerald - except by those who say there's a bigger one.

Fura weighs about five pounds and contains more than 15,000 carats. (Try hanging that around your neck!) When I saw it on a stand in the Gonzalo Jimenez de Quesada convention center near the Hotel Tequendama, where it'll be until either this Saturday or somebody grabs it, about a dozen uniformed security people stood around watching - even tho you can't get within a dozen feet of it.

Fura, named after an indigenous god whose tears turned into emeralds, was mined 12 years ago near the town of Muza in Boyaca. This is the first time it's been exhibited in public.
Altho Fura is big, it's color isn't particularly dark, so it's not all that valuable. But it is lots bigger than the famous emerald owned by Russian Empress Catherine the Great, which sold for a cool $2 million. Fura has a companion, Tena, named after Fura's unfaithful lover, which is darker and therefore more valuable, despite being much smaller.
More than half of the world's emeralds are mined in Colombia, and Colombia's stones are said to be of especially good quality - at least by Colombians. Lots come from the Muza region, not far from Bogotá. Colombia exports about $120 million in emeralds every year, mostly to the U.S., Hong Kong and India. Some of them first pass thru the open air emerald market on the corner of Jimenez and Seventh Aves., where men buy and sell the stones. 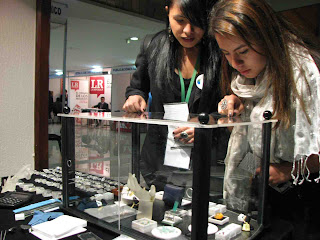 Generally, the larger a stone and the darker its color, the more valuable it is. Also, hold it up to the light to see whether it has internal flaws.
However, Colombia emerald industry's history has been marred by violence and abuses, with emerald 'kings' sometimes directing their own paramilitary forces and resolving disputes with guns. The most famous of Colombia's emerald kings is Victor Carranza, who has been the victim of repeated assassination attempts and is accused in Spain of smuggling both drugs and emeralds. I've also heard accounts of dangerous illegal mines and the use of child miners. But Colombian emeralds have not been used to finance outright wars the way that some African diamonds have.
Oh, and there's a stone in California that's claimed to be the world's biggest emerald. Those fighting over it have, fortunately gone to court instead of shooting it out. 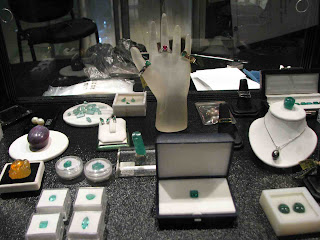 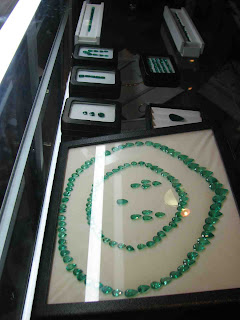 Email ThisBlogThis!Share to TwitterShare to FacebookShare to Pinterest
Etiquetas: emeralds

Excellent overview, it pointed me out something I didn’t realize before. I should encourage for your wonderful work. I am hoping the same best work from you in the future as well. Thank you for sharing this information with us.