The government says it's taken many of the protesters' concerns into account, and that private funding will allow public university's to expand enrollment.

The march was mostly peaceful, apart from broken windows, until it reached Plaza Bolívar, where protesters clashed with police, who fired tear gas at the demonstaters. In the city of Cali one demonstrator when potato bombs he carried in his backpack exploded, according to El Tiempo. The protesters' most dramatic accomplishment today may have been painting the riot police. See photos here.

In contrast to this guy's sign, according to this article, 15.6% of Colombia's 2011 budget went to education and 8.2% each to defense and law enforcement. The government has promised to nearly double the higher ed budget in 2012. 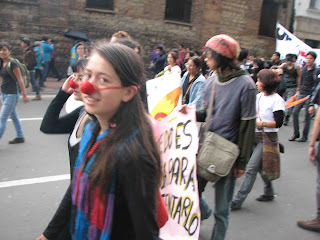 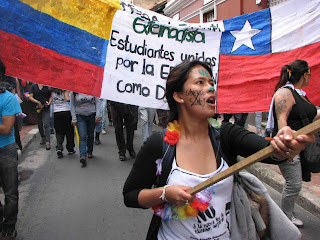 The guys carrying the signs in Japanese have just kinds of strung some characters together, though, if you were really liberal with your reading, one might say "We Japan Speaking."

Thanks for the translation. I was better off when I assumed it was something profound.

We need more common space for better living, not more public space under the government administration. The concept of space not only just the physically means, but also the spirituality.