Which Way Will the Magdalena River's Future Flow?

The Magdalena River is Colombia's Mississippi, flowing for 1,540 kilometers and draining parts or all of 18 departments, where 80 percent of Colombians live. The river contains lots of biodiversity and drains some of the world's most biodiverse regions. 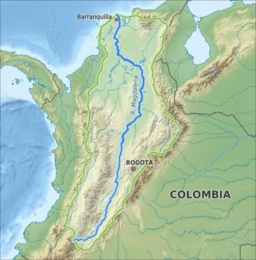 But the Magdalena has huge problems: it's polluted, and stretches are silted up, making shipping impossible. And Colombian officials have long looked at it for potential for generating hydroelectric power.

So, the Magdalena can expect many changes - but will Colombia develop this river in a sustainable way, preserving as much as possible of its grandeur and biodiversity?

Suddenly, I feel very unsure. The other day, Colombia hired Hydrochina, a Chinese state company, to create the 'Master Plan for the Exploitation of the Magdalena River.' Sadly, China's environmental policy at home can be described in five words: 'Economic growth at all costs!' Look at the infamous Three Gorges Dam project, or the terrible pollution choking China's major cities.

Can we expect the Chinese to be more careful with other nations' resources than they have been with their own? I doubt it.

Colombia might have hired a company from the U.S., Canada, Holland or Brazil - there are lots of countries whose environmental reputations and philosophies are less bleak than China's. But Colombia chose China, probably because the Chinese were willing to finance the plan with $5.7 million, requiring Colombia to pay only $700,000. Like anybody else, the Chinese are only willing to pony up that kind of money because they want something back: political and economic influence and raw materials.