Bogotá's Central Cemetery is a place of history and religion, but also magic, miracles and faith.

It's a sort of free territory, suspended in time and separated from the city, where ordinary rules don't apply. Believers plea to the long-dead for miracles. A Jewish-German beer company founder becomes a Catholic saint in Colombia. An astronomer becomes of the object of veneration and superstition. The tomb of a rich boy, a nobody in life whose name has been erased by time, becomes a miracle maker.

Amidst this magic and miracles lie the Great Men of Colombian history - generals and guerrillas, political leaders and presidents.

In life, Colombia is a classist society with little social mobility. But in the Central Cemetery, rich and poor mix, common citizens lie near presidents, guerrillas near generals and revolutionaries near dictators.

Reality also twists and bends. History mixes with legend and the tombs' true histories become lost to time, erased and replaced with more colorful and perhaps more meaningful tales. The tomb alongside astronomer Garavito's is visited by prostitutes, who tell two stories: one of the women buried here was either a rich woman who helped the prostitutes until she was discovered and murdered by her husband, or herself a prostitute who gave her earnings to the poor. Reality also bends in a second way, as kids visit the cemetery smoking pot, one with a bong made from an apple.

Catholicism mixes with mysticism and folk beliefs and science with superstition.

The cemetery is also a refuge, from laws and social pressures. Kids smoke pot, and nobody seems to care. A girl from the nearby prostitution district sits on the tomb of astronomer Garavito, gets stoned and wails 'amor mio' (my love) over and over again. I've met her on the street, where she's seems sensible and sane enough. Marijuana seems to be the drug of choice here, perhaps the elixir for communion with the afterworld. 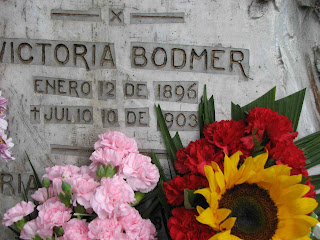 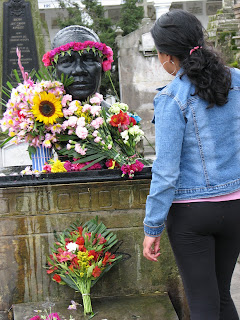 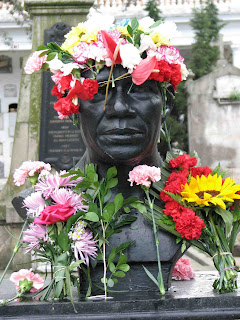 The dead don't make judgements, either on the other dead or on the living. Inside the cemetery, transvestites, drug addicts, believers, performers and eccentrics all seem to find acceptance.

Do spirits wander here? If they wander anywhere, they must come here.