Pollution: We See It, But They Don't. 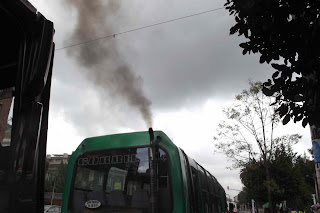 I took this photo today on Ave. Septima, less than a block from the Ministry of the Environment. The pollution looks pretty bad to us and is causing tremendous damage to bogotanos' health - particularly children, asthmatics and the elderly - is apparently invisible to the officials who are supposed to control it. Check out this video, in Spanish, denouncing pollution in Bogotá. (Video sobre contaminacion en Bogotá.) 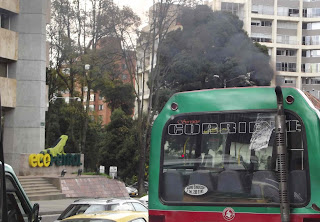 I took this photo about one block further north. Behind the second bus's plume of smoke you can see the green iguana symbol of ECO-Petrol, the state oil company which produces our diesel fuel. A few years ago, EcoPetrol promised to provide diesel fuel which met world standards. But, despite record profits, and their insistence that Bogotá's diesel contains only 50 parts per million of sulphur, these rolling chimneys make me doubt it.

And no matter how clean the diesel sold in Bogotá' may be, it won't clean up our air as long the dirty diesel sold in munipalities surrounding the capital continues to be cheaper, due to tax differences. Those who can save a few pesos by filling up outside the city, and then subject all of us to that dirty fuel.
.

HOPEFULLY the city will phase out the old buses. HOPEFULLY EcoPetrol will match its words with actions and try to make its 'green' image a reality.

Mostly, tho, Bogotá's got to enforce its pollution laws. They are on the books.


For more of the same, check out these videos I took on Calle 19 the other day. I suppose that 19th is a long way to expect the environmental authorities to travel to enforce the law. After all, they'd have to breathe the air outside their offices.

Fighting for the Right to Pollute.
A Toxic Assault on Bogotá's Breathers
In Bogotá, Not All Smoke Is Equal

Its really unbelievable, though the worst thing is i've (and probably the writer too) seen much worse ere it just leaves a bloody horrible huge trailing cloud.....
Apparently some new cleaner buses are supposed to put into service by the end of the year, but who know..this is Colombia after all, you can't help but love everything but the politics.

Unfortunately, new, cleaner buses won't improve things unless they do something about these old rolling smokestacks, as they're called.

It's just mind-boggling to me how this is ignored - and yet the Secretaria del Ambiente insist that they enforce the law. Right.

It's yet another example of magical realism:

'Pretend that a problem's not real, and like magic it won't be.'

Yes, I've also seen much worse - but these seemed particularly meaningful because of the location.

Ecopetrol is in fact delivering clean Diesel to Bogotá (about 50 ppm of sulphur and lowering towards 20 ppm).
But the problem is twofold: the diesel quality and the ages (and maintenance) of engines.
Unfotunately Bogota buses are very old AND in bad shape, so the contamination is almos inevitable.
I would tax the cars and buses, the older, the more...

The last that I heard, the diesel had about 300 ppm of sulphur. Several years ago, EcoPetrol had said it would drop the sulphur to 50 ppm by importing fuel until it completed a refinery expansion. But I understand that it hasn't done so - despite record profits. I'd be interested in any reference about it being at 50 ppm.

I'm in total agreement about the disastrous condition of Bogotá's ancient fleet of buses (and trucks, and even some new Chinese and Korean diesel vehicles). But it's the environmental authorities' deliberate blindness which most exasperates me.

It is 50ppm, here are the details of the diesel sold in Bogotá (ACEM, which is a cleaner version of ACPM)

Unfortunately, the high levels of fuel smuggling also reach Bogotá, and Diesel outside specifications is also been sold.

Thanks for the EcoPetrol reference, altho I'd very much like to see a university or other third party confirm that.

I'm sure that smuggling is a problem. But, more than that, many Bogotá vehicles fill their tanks outside the city where the fuel is cheaper (because of tax differences) but also much dirtier.

They really need to expand the 'clean fuel' region to areas around the capital.