Fighting for the Right to Pollute 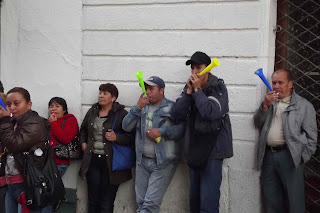 A small crowd of owners or drivers of those creaky old buses which infest Bogotá's avenues held a noisy protest today outside of City Hall. They said they're demanding three things from the government: cheaper fuel, a bigger cut from the planned Integrated Public Transit System (SITP) and an end to the retirement of the oldest buses.
These guys are undoubtedly hard-working and often low-paid, so it's easy to sympathize with them. But all of their demands are bad for Bogotá, which desperately needs to make its streets less chaotic, less congested and less polluted.


Pollution: We See It, But They Don't

A Toxic Assault on Bogotá's Breathers Pollution: We see it, but they don't.


Cheaper vehicle fuel would mean more congestion and pollution and less money for things like schools, hospitals and police.
The SITP, which would integrate TransMilenio, the existing private buses and a promised rail system into a single system, keeps getting postponed, but will come indefinitely. It's also a necessity, to put some order and efficiency onto the streets.


will grow when the two new TransMilenio lines finally go into service. And, lots of those excess buses are old, unsafe and highly-polluting - but they also pay the bills for their owners, so it's understandable that they fight for their right to keep them on the road and poisoning Bogotá's air.

But the city's transport system is not a social service agency, to support people in their old age. The cost to the other eight million Bogotanos is just too great. The city needs to retire these old buses and pension these guys off or find some other work for them to do. That won't be easy on them, but their vehicles' pollution and congestion is very hard on everybody else.