A Glimpse of Historical Tragedy 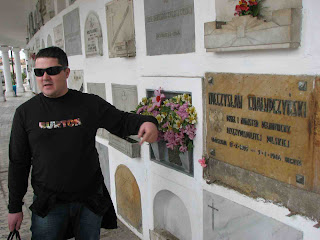 Sometimes, people with the right knowledge can turn a curiosity into a window on historical tragedy. 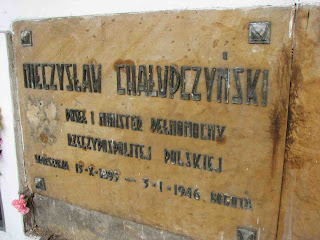 This tomb in Bogotá's Central Cemetery stood out because it might be the only one whose text is not in either Spanish or Latin. How did a lone Pole end up in this city with few immigrants? It looked to be one of many stories lost to history. Then a young Polish couple did the bike tour, and opened up a window for me.

The man's title on the tomb told the couple that Mieczysław Chałupczyński had been a member of the Polish government - yet, Bogotá was an unlikely place for a Polish politician to end his career. However, from the tomb's text and the place and date of death, 1946, the Polish couple inferred that his was not just any Polish government. The man had evidently been a member of Poland's government in exile which operated in London during the Nazis' WWII occupation of their country. 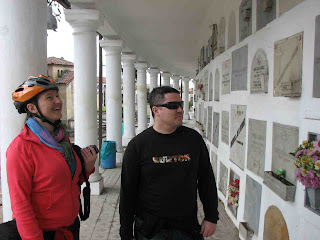 A bit of googling told me more: just before World War II, Mieczysław Chałupczyński had been Poland's charge de affaires in Slovakia, were he tried desperately to find allies against the impending invasions by giant neighbors Germany and the Soviet Union. His efforts failed, and Slovakia participated in the German invasion of Poland - only to be itself swallowed up by its totalitarian neighbors.

Chałupczyński presumably escaped to London and joined the government in exile, which called itself Free Poland. He became his government-without-a-state's ambassador to Colombia, which had broken relations with Germany in 1941. Colombia declared war on Germany in 1943.


In 1944, Chałupczyński undoubtedly participated in the creation of the Association of Poles in Colombia.


However, after Nazi Germany's defeat, Chałupczyński's hopes for an independent Poland were shattered again. The Soviet Union occupied his homeland and imposed a new type of totalitarianism on the country which had just suffered through five years of war, Nazi occupation and the Holocaust.

For Chałupczyński, returning home would have meant suicide. The Soviets tried to stamp out all traces of Polish nationalism, and a patriot like Chałupczyński would have been murdered or shipped off to a Siberian slave labor camp. Then, in December 1945, insult followed injury when Colombia recognized the 'Provisional Government of National Unity' in Poland, a Soviet-created puppet. Two months later, Chałupczyński died, perhaps of a broken heart, an ambassador whose nation had disappeared. He was only 53.

But the Polish community who buried Chałupczyński so humbly did assert their national pride in one subtle way. The Soviets had removed the crown from the white eagle on Poland's coat of arms, but the eagle on Chałupczyński's tomb still wore it.

Sadly, sometime during the last 65 years, the coat of arms was stolen, probably by a drug addict who sold the metal for a few pesos. Chałupczyński apparently has been forgotten by the Polish-Colombian community as well. Also, beside Chałupczyński's tomb is an empty one. Was this intended for his wife? Where did she die? That's a mystery which is probably lost to history.

As for the Polish couple, who are from Krakow, they described their nation as divided between younger progressive people and strict religious and cultural conservatives, but independent and moving forward as a member of the European Union.

I stumbled upon your blog while trying to see how people found my blog using the search terms they did. I enjoyed seeing my neighborhood blogged about. :)

Thanks for the note. It was good meeting you and visiting Luz y Vida. The Chilean guy was also very impressed.

I'm glad that you found my blog. I'd like to do a blog entry sometime about the school.

Thanks for the note. I hope that one day the Polish-Colombian community, if it exists, will put the eagle back up. The cemetery's security is better now.

Thank you for sharing this, my family name is Chalupczynski and we came from an area near by, now we are wondering if this is a distant relative. We enjoyed your post so much.

Thanks for your comment Sol. I'm glad that you enjoyed the post. If you learn any more about this person, I'd be interested in hearing it.

We looked back through the historical records from Poland and he was a cousin of my Great Grandfather Konstanty. Several of our Chalupczynski relatives ended up in Auschwitz and it is listed in their records that they were political dissidents, which is not surprise.

Wow, Solitaire, what a history! A real historical tragedy.

Thanks a lot for your research.