The Hay Festival which just ended in Cartagena is an annual celebration of literature, dance, gastronomy and other culture from all over the world. But this year, with much of Latin America wracked by drug-fueled violence, it also carried a subtext about how to address the regional plague.

The 2012 festival was headlined by Mexican novelist Carlos Fuentes, who has spoken out frequently against prohibitionism, which many blame for his nation's soaring violent crime.

"Mexico's policy doesn't end the problem, but worsen's it and makes it insolvable," Fuentes said, who supports gradual drug depenalization beginning with marijuana. "It involves opening an a subject area in which drugs are consumed but aren't a crime, and trafficking ends because it's not profitable anymore."


But the most prominent speaker on drugs was undoubtedly Colombian Pres. Juan Manuel Santos, who made clear that he supports drug depenalization - but only if Colombia has an international consensus behind it.

"That solution would be acceptable for Colombia if the whole world accepts it," said Santos (asking for a lot). But for Colombia to go it alone would mean making itself an economic and political pariah.


"We must seek alternatives," Santos added, "because narcotrafficking finances all the illegal groups."

Those illegal groups include Colombia's guerrillas, paramilitaries and narcos, as well as the cartels which have turned some Mexican cities into slaughterhouses and created gangs in Brazil, Venezuela and the Caribbean. A recent study found that 40 of the world's 50 most violent cities were in the Americas. (Five of those cities were Colombian, Cali ranking in 11th place. Bogotá was not in the top 50.)

Nicaraguan novelist Sergio Ramirez observed that "Central America occupies a tragic position: geographically, it's a bridge for drugs from south to the north and we can't move from there...Just as Mexico experienced a 'Colombianization,' Central America is now being 'Mexicanized.'

For a really strong statement backing drug depenalization, read this statement on the Colombian presidential website. It's striking to me. A position which used to be only whispered in hallways is now out in the open. But will policy follow reasoning?

"Colombia has perhaps been the nation which has suffered most fighting against narcotrafficking. It's cost us our best leaders, journalists, judges and police."

Santos then compares the War on Drugs to pedaling a stationary bicycle, and then goes on to recall his time as Colombian defense minister, when he worked with the U.S. D.E.A. and defined 'success' as raising drug prices in U.S. cities. However, Santos observes, those higher prices only made the illegal business even more profitable for those who got their drug shipments thru.

"Take the profits away from organized crime, and maybe take these profits for the state in order to carry out campaigns against consumption, are some practical solutions, which I believe that if adopted on an international level could be effective," Santos said.

Not long ago, these were radical opinions seen only in alternative publications. But here they are expressed by a conservative president of one of the nations which has made the greatest efforts and suffered the most in the War on Drugs.

If some of the novelists and other writers who attended the Hay Festival have their way, perhaps drug decriminalization will change from fiction to fact. 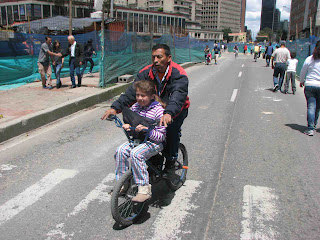 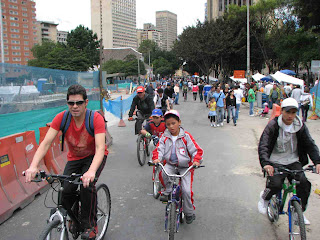 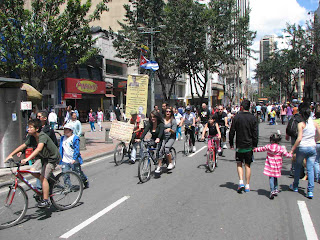 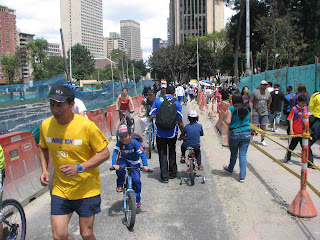 Which crime deserves harsher punishment? Small-time gambling, or drunk driving and killing someone?

In Bogotá, apparently the former.

Today's El Tiempo reports that, despite officials' vows to crack down on drunk drivers, motorists who kill others while drunk continue receiving short prison sentences or are even allowed to do their 'prison time' at home.

In contrast, I saw this photocopy today warning that several vendors of illegal 'Chance' tickets had received four-year prison sentences. Those are people who sell either counterfeit tickets from the city's official Chance numbers game or tickets for their own, unofficial and illegal numbers games. Numbers games are bad bets and mostly take money from poor people, who can least afford to lose their money. Bogotá's official Chance game is supposed to finance health care, and the government estimates it loses close to 1.5 billion pesos - or $800,000 dollars - per month because of fraud and illegal games.

But selling fraudulent tickets can't compare to the immorality or damage from getting drunk, driving a car and killing someone. But, El Tiempo reports, judges continue to consider drunk driving deaths 'unintentional,' and so deserving lighter punishment than a deliberate killing. In contrast, many other nations hold people responsible for their actions while under the influence. Otherwise, inebriation becomes a license to kill, as happens here.

El Tiempo also reports that drunk drivers often pay off their victims' families to drop charges against them.

As so often happens, 'justice' obeys economic power. And in Colombia car drivers are by nature people with money, if only because they own cars.

This story in the other day's El Espectador newspaper reports that an experienced Colombian anti-mafia prosecutor, who was fired after refusing to take a lie detector test administered by the U.S.'s FBI in 2004, has been reinstated by a court order.

I'm struck to read that a U.S. government agency is administering lie detector tests to Colombian officials - and even moreso that Colombia would fire someone for not taking the test.

Some prosecutors who did take the FBI's test reported having been asked humiliating questions, including ones about their sex lives, El Espectador reported. (The story doesn't make clear whether or not the tests continue.)


"If one is not capable of defending his dignity, neither is he capable of guaranteeing a correct legal process," prosecutor Jesús Albeiro Yepes told El Espectador.


Yepes has a good point. Certainly, Colombia has a corruption problem (as do many countries). But U.S. leaders have repeatedly touted Colombia as a great ally in the drug war. Doesn't such an ally deserve lots more respect and trust? Particularly if the U.S. wants Colombia to eventually stand on its own in the War on Drugs?

This story reminds me of an incident during George W. Bush's 2007 visit to Bogotá, when U.S. Secret Service agents frisked Colombia's presidential honor guard before Bush's arrival. How's that for trust?

A 100th Anniversary for a Millenial Site

The Parque San Agustin in Huila Province is celebrating the 100th anniversary of scientific research about the site's famed 2,000-year-old monoliths. For its own part, Bogotá's own San Agustin Park in the Santa Fe neighborhood is passing a more modest first birthday.

Huila's San Agustin archeological park is the only place in Colombia with pre-Columbian monuments. But their makers remain a mystery. The people, called Agustinianos after the present-day town nearby, created about 300 stone monuments between about the first and eighth centuries after Christ. Then, their civilization disappeared, perhaps pressured by the invasion of other peoples, climate change or other causes.

The Swiss writer Erich Von Däniken, who saw extraterrestrial influences in many ancient human civilizations, credited aliens with influencing the ancient Agustinianos. Others have theorized about Mayan, Egyptian or even Viking connections. All those speculations, which have little evidence, short-change the native Colombians, who undoubtedly were capable of creating magnificent stone monuments without outside help. Researchers theorize that the monuments were used for ancestor worship and may have represented reincarnation. Many mix human and feline charcteristics, suggesting the mixing of human and animal spirits. Perhaps the monuments provided gateways between this world and the next.

The monuments in Bogotá's own park, which is located in the very urban Santa Fe neighborhood behind the Central Cemetery and just a few blocks from the red light district, have a better-known origin: They were created by local sculptors, including some of the people who carve headstones nearby.

For the rest of this year, the San Agustin Archeological Park in Huila plans to commemorate the Colombian and foreign archeologists who began researching the region in 1913. Research there continues, and probably will never end.

Perhaps more significant for us than the original Agustinianos' origin was their disappearance. Like the Mayans and the monument builders of Easter Island, the Agustinians were replaced by a much simpler culture incapable or uninterested in creating such massive objects.

Did the original Agustinianos fall victim to climate change? Overpopulation? War? Environmental destruction? We may never know. But, for a nation like Colombia challenged by many of these problems and others, the Agustinianos' disappearance serves as a warning about preserving the environment and finding peaceable means to end conflict.


While Huila's San Agustin region appears bucolic, much of rural Colombia suffers from erosion, pollution, deforestation and desertification. And Bogotá's Santa Fe neighborhood captures many urban ills, including litter, air and noise pollution. Sometimes, it seems, cities like Bogotá are carrying out an experiment in how a species can poison itself in its own wastes. 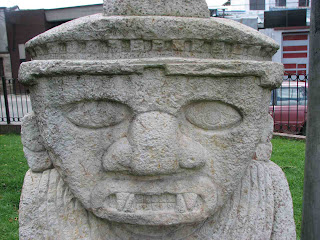 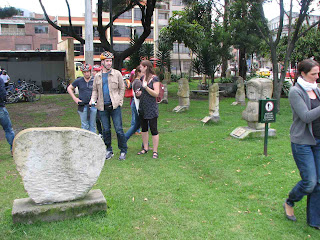 With Bogotá suffering unseasonable downpours, it's appropriate that La Candelaria's Luis Angel Arango Library (on 11th St. across from the Botero Museum) is holding an exhibition about Colombia's water.

I visited the library while the rains had turned 11th Street into a river. On the next corner uphill a group of street vendors and their children had taken refuge in an entrance, where they appeared to be caged in.

Colombia is one of the planet's most water-blessed nations. But lots of those water resources are threatened by pollution, erosion and deforestation. One of the worst cases is Bogotá's own Rio Bogotá, which you can smell long before you can see. 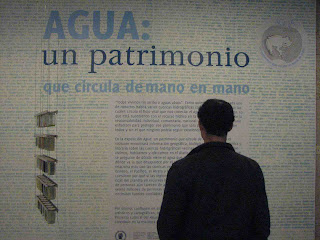 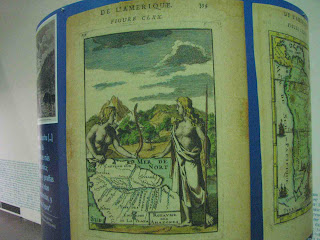 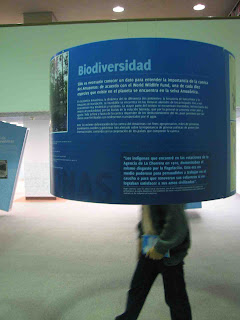 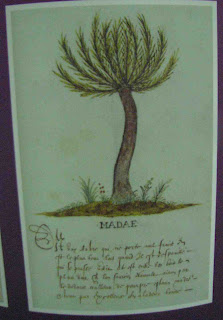 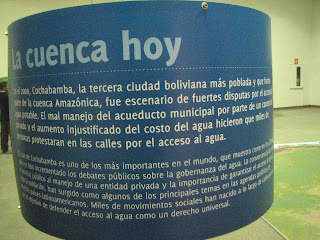 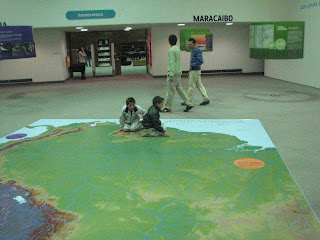 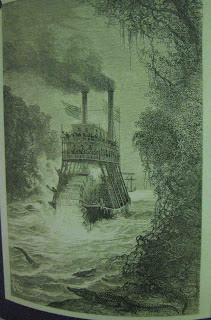 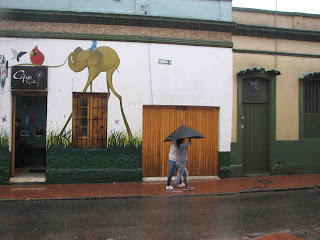 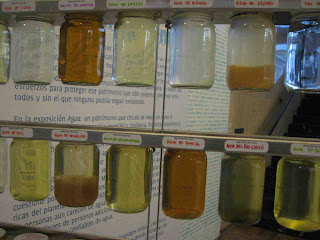