Bicycling down Carrera Septima last night I came upon this group of FARC members on campaign.

But let's be clear: These were not the old guerrilla FARC, but the new political FARC: the Alternative Revolutionary Force of the Common People. The same initials as the armed guerrilla organization, and many of the same people, but a whole different nature.

That they have really changed became clear to me when I heard their discourse: It was standard,
boring and political: Lots of promises about equality and vows to improve healthcare, increase equality and improve security.

Call them hypocritical if you like. After all, not long ago, the FARC guerrillas were out there kidnapping and assassinating politicians, driving peasants off of their land, and in general generating all the sorts of problems and suffering they are now campaigning against.

The new FARC will not likely be any more successful than they were in their previous incarnation at accomplishing these goals. However, at least they are now playing the political game instead of tearing their nation apart. In that, the deeply flawed peace treaty at least accomplished a whole lot.


Bogotá's sometimes-annual bullfighting season started last weekend. But, no matter how many ears and tales the fighters are awarded and how many bulls they kill, the real story story is the fate of bullfighting in Bogotá and the rest of Colombia.

Bullfighting has been under siege here since Mayor Gustavo Petro managed to block the activity
during most of his mayoralty. However, a 2016 court ruling obligated the city to allow the fights because they are a tradition here, even tho current Mayor Enrique Peñalosa (perhaps after having observed that the anti-bullfighting crowds are far larger and more motivated than are the bullfighting fans), says he wants to ban bullfighting as well. It also seems as tho bullfighting is getting aged out, since today's young people have other interests, such as videos, football and Pokemon Go.

City officials have talked about holding a referendum to let Bogotanos vote on whether or not they want bullfighting to continue, but it's not clear what legal weight such a vote would carry. A senator has also introduced legislation to ban bullfighting nationally. Yet, while only a tiny minority of people seem to like this blood sport, they tend to be economically and politically powerful, giving them a good shot at blocking any anti-bullfighting laws.

No matter that the bulls live good lives before they are brought to the Plaza de Toros, where the fight lasts only a quarter of an hour. And no matter that much, much worse practices, such as cockfighting and industrial farming, which affect many more animals, are ignored by protesters: It still is a fact that killing an animal for sport and
entertainment is a cruel spectacle which harkens back to centuries ago.

But if bullfighting ends, will the historic, Moorish-influenced stadium find another life? The panels the city put on its front call it the 'Plaza of a Thousand Uses,' but it receives almost no use at all outside of bullfighting season and a few tourist visits. A rare exception this year was the Davis
Cup Tennis Tournament, held in the stadium. (Colombia lost Croacia.) 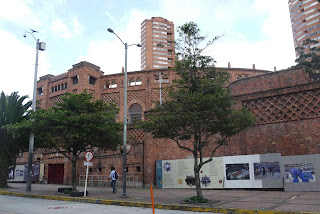 End of the Free Motorcyle Ride (for men)

In most places, the sight of a motorcycle carrying a passenger is probably a bit charming, and demonstrates at least a sort of fuel efficiency.

In Colombia, however, this sort of ride sharing has a brutal history. In the heyday of the narcos,
professional assassins used motorcycles' back seats as work platforms. Today, those sort of killings are much less common. But police say that motorcycle passengers, called parrilleros, commit a huge portion of muggings and other street crimes.
The solution? Bogotá plans to prohibit the carrying of passengers on motorcycles with engines larger than 125 cubic centimeters in a huge part of the central city. Not all passengers will be banner, however: Only male ones.

Last night, thousands of motorcyclists jammed Bogotá streets in protest. However, the same rule has been implemented in other Colombian cities with successful results, according to police.

In a politically correct nation such as the U.S., such a rule would likely get tossed out for gender discrimination, or be challenged by same-sex couples who'd complain protest that only heterosexual men could carry their partners with them.

However, the measure reflects a reality: The overwhelming majority of violent crimes are committed by males. Until women become more ambitious criminally, it's fine to discriminate in their favor.

But this all begs the question of how police will enforce this rule, particularly on cold days when motorcycle riders are bundled up and apparently genderless. Will male passengers take to wearing spiked heels and wigs with long, blond hair flowing out from under their helmets?

The U.S. government approves of its citizens visiting Colombia - but not all of it. Four departments, located on the Venezuelan border and Pacific Coast regions, are supposed to be off limits.

While the U.S. directive generated protests from some of the forbidden regions, it actually generated relief from many more Colombians, who were happy that most of the country was in the 'visit with caution' category. That certainly would not have been true a few years ago.

Of course, the reality is much more subtle and complex. Colombia's Pacific Coast does suffer lots of violence, so why are only two of its departments on the no-go list? The region has been attracting growing numbers of tourists in recent years thanks to its fishing, surfing and spectacular whale watching, and nobody's told me of having had any problems there. Why didn't the U.S. State Department instead advise potential travelers to go there only with an agency which knows the area? After all, you can just as easily fall victim to crime in Bogotá by wandering into the wrong neighborhood.

Even more radical are the rules controlling the movements of embassy employees, who are still prohibited from riding buses and from traveling without permission in all but a few parts of Colombia.

Times have changed, and it's high time that the U.S. government changed its attitudes to match.

A Sad End for Samurai

You might have noticed the posters around town, or even encountered one of the search rallies. But no, Bogotanos are not taking up the ancient Japanese sport. Rather, 'Samurai' is the stage name of Hernández Beltrán, a prominent Bogotá hip hop musician who disappeared in mid-December.

Samurai's fans held on to hope and carried out a massive search. Fate was against them and Samurai, however. A few days ago, a badly decomposed corpse discovered Jan. 4 was identified as Samurai's. He had been murdered with blows to the head with a blunt instrument - perhaps in a fight.

Samurai became one of Bogotá's last homicide victims of 2018, in a city which still has way too many of them. 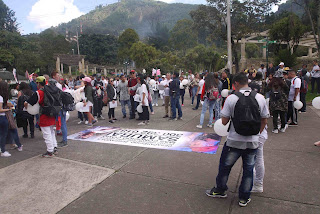 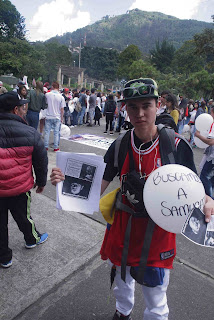 Yet, the latest United Nations plan alloted to Colombia an incredible 44% of the world's legal medical
cannabis production.

No, it's not that all Colombia suffer from ailments treatable only by medical marijuana. Rather, I suppose, Colombia was one of the few nations to bother to apply for the U.N.'s marijuana allotment. Add to that the warm tropical climate with lots of rainfall and humidity that favor pot production, as well as a government which has legalized medical marijuana and criticized the War on Drugs, and Colombia looks like a pretty nice fit for industrial marijuana plantations.

A lot of Colombian pot apparently will head north to Canada, where growing conditions aren't so good.

A Changing of the Art on Calle 26 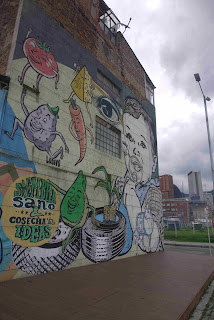 If there's one thing we know, it's that Bogotá has too many parks, police, soup kitchens and schoolbooks - and that's why the city is spending public money painting street art where there already is great street art.

Here are the old murals on Calle 26, sponsored by the city between about the Cementerio Central and the Universidad Nacional.

Street art is great, but Calle 26 had lots of it already.

Why not paint somewhere else, where there isn't great art already?


The image of the coal miner, incidentally, comes from a famous photo of a West Virginian miner who died young from black lung disease. The mural, by Toxicomano, declared that 'Water is worth more than gold.' Illegal gold mines have destroyed innumerable rivers and poisoned many people, particularly on Colombia's Pacific Coast.

If they were determined to spend the city's budget on more murals, then why not paint empty walls, of which Bogotá has many??? 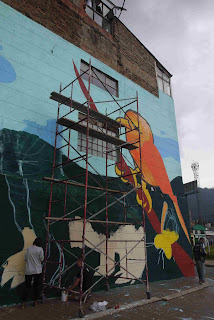 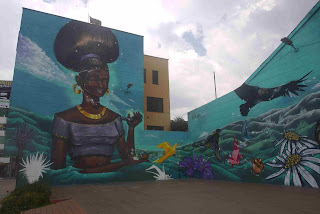 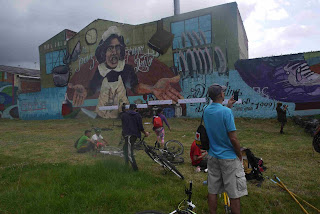 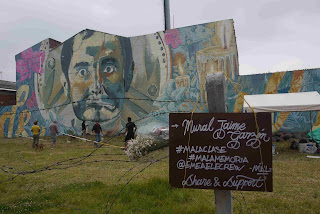 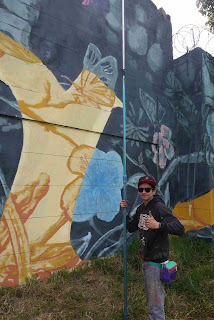 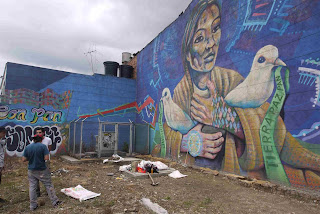 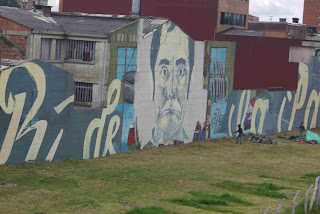 When it Rains, it Hails

Bogotá has experienced an unseasonal amount of precipitation in recent days, some of it frozen. Despite the altitude, it never snows in Bogotá, but it does hail, suddenly, violently and even painfully for those of us who have experienced its impacts directly.

The hail melts away quickly, washed out by the often torrential rains. But those rains inundate the city, many of whose streets appear to have been designed by people who didn't believe it rained in Bogotá. Intersections turn into pools, and streets into streams. 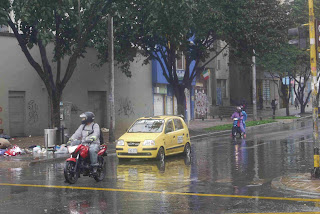 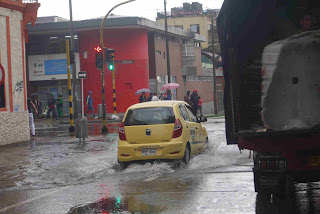 A Holiday Respite For Our Lungs

The holidays, when schools and businesses shut down and many Bogotanos leave town, allows a temporary respite for our lungs. El Tiempo illustrated this yesterday with dramatic side-by-side photos of Bogotá's air on a 'normal' (poisonous) day and during the holidays.