Bogotá's Parks, Plazas and Avenues Light up for Christmas

Bogotá's Christmas lights went on today in its parks, plazas and avenues, and the streets filled with gawkers and gazers. 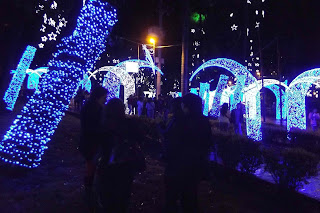 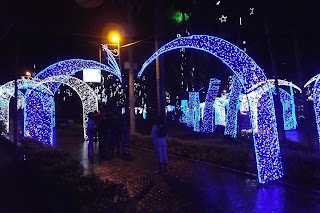 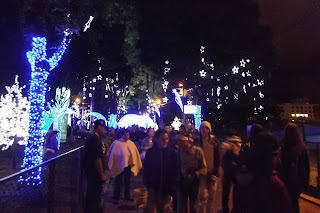 Did he not really not mean that?


One thing which has bothered me since moving to Colombia is the grammatical construction by which people say one thing while meaning the opposite.

I guess I supposed that I might just be imagining things - until I spotted this quote by Pres. Santos in today's El Tiempo, about protecting Colombians' rights in the wake of the controversial ruling by the International Court of Justice slashing Colombia's maritime territory in the Caribbean.

Did he really say this? Evidently, yes.

Did he really mean it? No. He meant exactly the opposite:

But this grammatical construction, for some historical reason, has become so internalized in Colombia that even educated people accept it for what it's supposed to mean, not what it does.

It's far from the Spanish language's only logical failing. Take the whole double negative thing, which in English would mean a positive - such as: 'No hay nadie en la casa,' which translated literally gives us 'There isn't nobody in the house,' meaning that there is somebody.

But that double negative has become officialized, institutionalized and sanctified in high school grammar texts. I'm just hoping that this 'Hasta no..,' construction never does.

English, of course, has its own grammatically nonsensical phrases, including 'I could care less.' People use it to mean they don't care, and should say what they really mean: 'I couldn't care less.'

Those are the ingredients for an ugly international dispute, which has the potential to turn violent, and will surely cost Colombia international stature.

That's what it looks like after Colombia withdrew from the Bogotá Pact, which gives the International Court of Justice in the Hague jurisdiction over disputes between members.

But the ruling leaves Colombia with one less international legal mechanism to peacefully resolve disputes between members and erodes Colombia's authority in every international organization. The pact, signed in 1948, is formally named The American Treaty for Peaceful Solutions, and it appears to have worked. As far as I know, there's never been a war between two nations which had ratified the pact. (Peru and Ecuador fought their border wars before Ecuador's 2008 ratification.) Previous to the pact, however, Latin American nations fought numerous border wars, including the ones which dismembered Paraguay and Bolivia and the 1932 Peru-Colombia war over Leticia.

Several border disputes, including ones between Chile and Argentina, Chile, Bolivia and Peru and another between Colombia and Venezuela over their border in La Guajira - which brought them close to war in 1987 - still fester in the region. The Bogotá Pact provides a presumably objective authority to resolve those peacefully, if not to everybody's liking.

By withdrawing from the Pact, Colombia rejects the authority of that court. But its decision comes too late juridically. After all, at the time the court ruled last week, Colombia was still a member of the pact and recognized the court's authority. And the Colombian government should also remember that, along with expanding Nicaragua's waters, the court also reaffirmed Colombia's sovereignety over the San Andres islands and their surrounding keys - which was what Colombia had asked for in the first place. By rejecting the new maritime boundary, Colombia also delegitimizes the ruling on the islands and keys.

Nicaragua has said it is sending military ships to patrol the waters which it now considers its territory. But Colombia says it is maintaing warships in the region. Does this sound like a threat of war?

Colombia's decision to leave the Bogotá Pact, like a child who abandons a game because he didn't win all he wanted, will also delegitimize Colombia in all international organizations, because other nations will suspect that Colombia, if it doesn't get its way, will simply abandon the field.

Colombia's decision, "means not only a violation of an international norm, but also confronts Colombia against the United Nations system and the international community," Walter Arévalo, professor of international relations at the Universidad del Rosario, said in an analysis published on the Congreso Visible website.

That's not a good position for a nation like Colombia, which has relied heavily on international cooperation, to be in.

Another Loser in The Hague: Drug Warriors?

Count another loser from last week's ruling by the International Court of Justice in The Hague: The War on Drugs.

On the one hand, the ruling dramatically expands Nicaraguan waters at Colombia's expense (if Colombia accedes to the ruling). Greater sovereignty by Nicaragua, an ideological opponent of Washington, could complicate the United States-backed drug war. How much, however, is questionable, since other nations, including Colombia, have the right to navigate those waters.

But the drug war will be weakened for a more important reason. Much of the cocaine and heroin smuggled to the U.S. from South America moves across the Caribbean, skipping from island to island to the mainland in go-fast boats or small planes. Suddenly, all of those already poor San Andres fishermen, with little education and limited job options, may see their incomes slashed by the court's decision. (Nicaraguan Pres. Daniel Ortega has said that San Andres fishermen will still be able to fish those waters - a promise which may be forgotten once Nicaraguan fishermen start complaining.)

What can the San Andres residents do when their fishing is restricted but their kids still need to eat? Of course, they can still navigate those waters, just not fish them. Inevitably, some will think about a highly profitable, if more risky, income alternative.

Interstingly, a week ago Pres. Santos said that the war on drugs has been "like a stationary bicycle" and outgoing Mexican Pres. Felipe Calderon told The Economist magazine that ending the drug trade was "impossible" and suggested alternative policies.

A Christian Army on Plaza Bolivar

Religious believers rallied on Plaza Bolivar this afternoon in opposition to abortion and gay marriage. Earlier in the day, gay rights activists had staged a same-sex kiss-a-thon in the plaza to protest an insulting statement by a congressman who called being gay 'a problem.'

Congress is considering reforming laws on several hot-button issues: regulating euthenasia, expanding abortion rights and creating same-sex unions with many of the same rights as marriage, altho they would have a different name. 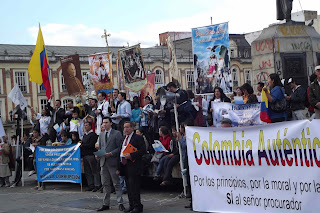 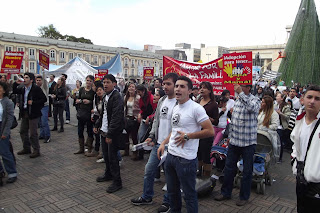 No Cyber Monday in San Victorino 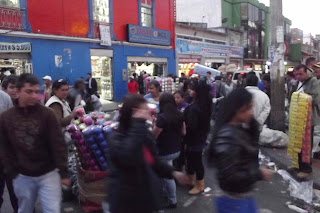 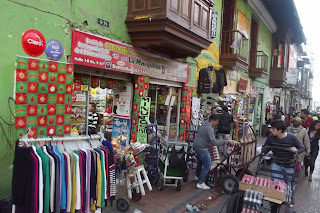 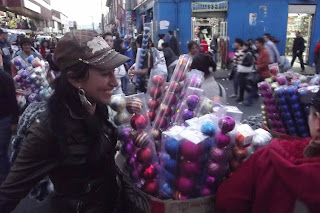 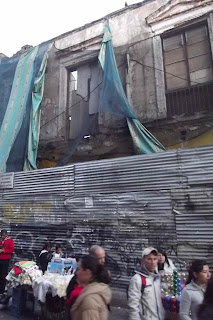 Vendors sell Christmas trinkets and clothes in front of a building that burned down several years ago. 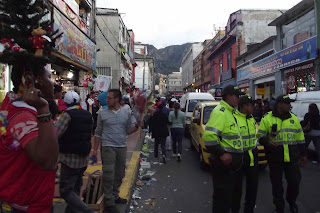 Suddenly, the police arrived. All these street vendors are selling illegaly. 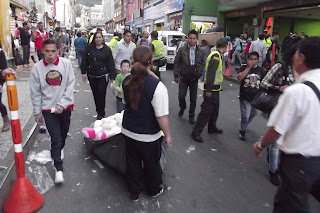 Time to drage it all away. 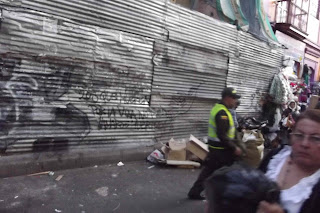 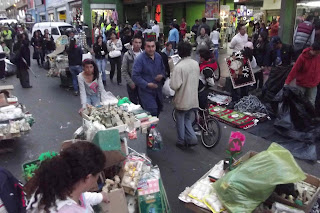 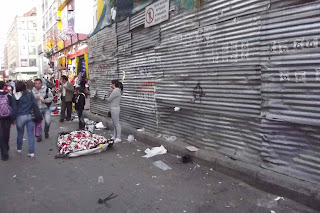 A lone brave vendor is left. But they'll be back.

Is Central Bogotá Falling and Burning Down? 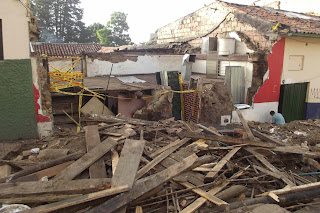 A few weeks ago this old home in La Candelaria simply collapsed one day. Since then, it's been cleaned out and boarded up. But will it be rebuilt? 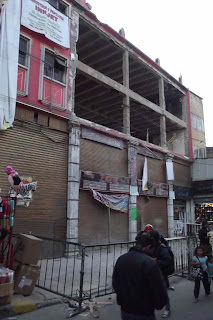 A few months ago, this once-handsome building in the San Victorino shopping area burned down. I don't believe that anybody was killed or seriously injured, but dozens of shops were destroyed.

The owners have started demolishing the building, which is more than has happened in other cases. 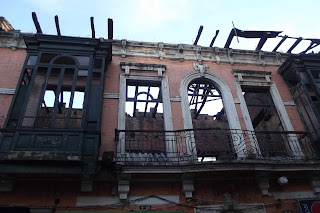 This historic building burned about 25 years ago, a neighbor told me. Because of its historic status, repairing or replacing it is complicated. So, the owner has just left the burnt shell there. 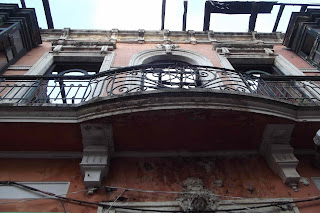 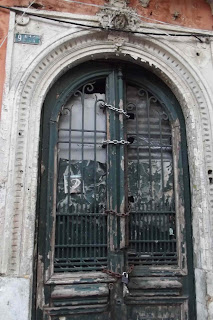 And this building below, also in La Candelaria, was gutted by fire about four years ago. Since then, it's been covered with metal and plastic - and left to decay further. 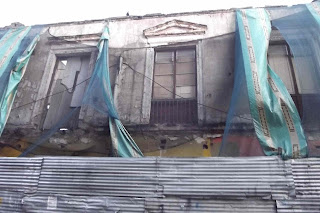 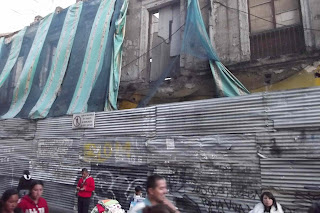 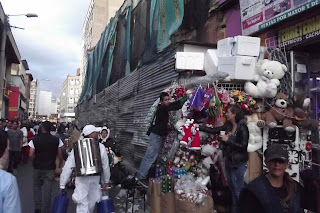 Juanes, the Colombian pop singer, was supposed to perform tomorrow in the Plaza de Toros Santamaria.

Perhaps the small, historic bullfighting plaza would have been an appropriate venue for Juanes, who is a popular guy, but no Madonna or Paul McCartney.

But it was not to be. The residents of Las Torres del Parque, which overlook the plaza, complained, and the concert was shifted to the huge Estadio el Campin.

Lots of singers have performed in El Campin. But I suspect that Juanes won't be able to fill it, leaving his concert looking a bit disappointing. The Santamaria would have provided a more intimate setting for Juanes's tender, if sappy, songs.

The bullfighting plaza's neighbor certainly have a right to sleep at night. But I imagine that Juanes, who is no heavy metaler, will stop singing at a reasonable hour. And anybody who moves into an apartment beside a stadium has got to expect to have some noisy activities there.

And particularly now that Bogotá Mayor Petro wants to end bullfighting in the Santamaria, it's important to find other uses for on of Bogotá's architectural landmarks.

The International Court of Justice's ruling last week slashing Colombia's territorial waters around the San Andres Archipelago was a disaster for the islands' fishermen, whose fishing opportunities appear to be drastically curtailed.
﻿
﻿But the environment will also suffer if Nicaragua does not continue Colombia's conservationist policies in maritime areas the court transferred to Nicaraguan control. Those areas include 54% of the  349,800 square kilometer Seaflower Biosphere Reserve and Marine Protected Area, which surrounds the islands. According to the San Andres government, it constitutes the largest marine protected area in the Americas, with more than 400 fish species, 54 soft coral species and 48 hard ones, 130 sponge species, 4 turtle species and 157 species of birds, among lots of other biodiversity.

﻿﻿﻿﻿ In addition, a year ago Pres. Juan Manuel Santos promised to ban oil drilling around the islands.

Will Nicaragua be a good steward of its maritime environment (assuming that Colombia recognizes the court's ruling)? Unfortunately, Nicaraguan officials' initial remarks after the court decision have been about exploiting the region's resources, including undersea oil.

The answer is important not only for the region's biodiversity, but also for the fishermen's livelihoods. Fish do not recognize political frontiers, and destroying their breeding habitat will destroy fish populations throughout the Caribbean.

Atheists on the March 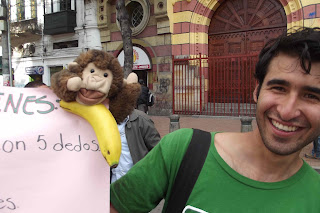 In a country which is saturated by Catholic symbols and traditions, if not always practices, I was surprised this afternoon to encounter a protest march by atheists. (They were celebrating the anniversary of Darwin's Origin of the Species.)

I encountered them, ironically, in the Plaza las Nieves, which is named for the Church of Our Lady of the Snows, which stands across the street. A wise person once said that promoting atheism could help nobody, since, if the atheists are wrong, you're going to Hell, and even if they're right, there's no reward besides satisfaction.

But promoting atheism can do society a favor if it supports evidence- and science-based policies, such as ones recognizing the reality of global warming, the value of research such as stem cell treatments and equal civil rights. Sure, evolution is a fact. But if someone wants to believe that we were all created by a giant frog and live on the back of a turtle, it's all the same to me - as long as it doesn't affect public policy or get taught in the schools.

Reflecting on the atheists' march, I was struck by the pradox that the United States - the source of so much science and technology - is also probably the developed nation where the influence of religion is the strongest, in areas like education, gay rights and abortion policy.

Colombia has been an officially secular nation since its 1991 Constitution. But Catholic culture is everywhere.

Sometimes, perhaps, secularism gets taken too far, such as when a court recently banned the quoting of The Bible in court decisions. The Christian Bible, like pretty much all religious books, contains lots of good advice - as well as lots of ugly stuff. Even so, the Bible quotes do reveal a kind of bias. After all, Colombian courts are much less likely to quote the Koran or the Book of Mormon.
http://www.laicismo.org/detalle.php?tg=434&pg=1&pk=16434
http://bogota.ateos.co/ 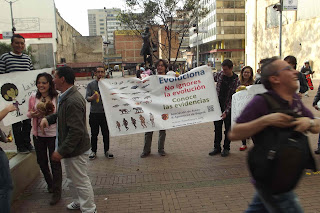 But later on I saw these people hanging religious banners on Plaza Bolivar. 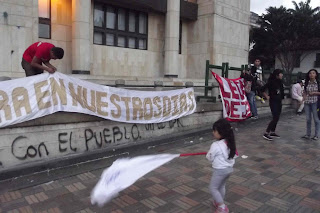 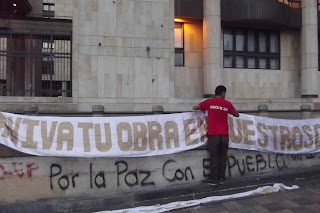