The Jesuits in Colombia


With the Catholic Church's first-ever Jesuit Pope and first-ever Latin American Pope, I wondered about the history of the Jesuit Order, the Company of Jesus, in Latin America.


Founded in 1540, the Jesuits, or the Company of Jesus, have built a reputation for humility, social activism and dedication to the poor. In those senses, Francis's story provides some contradictions. Jesuits, after all, are not supposed to seek positions of authority. And, while Francis does show a real humility and vocation for the poor, by my reading the Argentine Catholic Church and Francis (then Jorge Mario Bergoglio, the Provincial superior of the Society of Jesus) in particular, could have done much more to oppose and condemn the human rights violations of the Argentinean dictatorship. Instead, the church hierarchy kept publicly quiet, altho Francis says that he worked privately to protect victims.

Across Latin America, during the colonial era the Jesuits were known as evangelists, educators, businessmen and protectors of the native peoples. They are perhaps best remembered for the huge misiones they established in several South American nations, where native peoples were employed, evangelicized and protected from slave hunters. Today, the ruins of many misiones have become tourist attractions. They are also controversial, because of their mix of exploitation and obligatory religious changes. But the Jesuits also seem to have protected the Indians and respected other parts of their culture more than did other Europeans, who often wanted only to enslave and overwork native peoples.

In contrast to their relatively enlightened work with native peoples, the Jesuits were also important buyers and employers of slaves from Africa.

I haven't found any Jesuit misiones in colonial Colombia, known roughly as La Nueva Granada (there were many in Brazil, Paraguay, Bolivia and Argentina), but the order did found many schools and haciendas in La Nueva Granada during the colonial era.

In 1767, apparently due to tensions caused by the Jesuits great economic power, as well as liberalizing and secularizing trends in Europe, the Jesuits were expelled from the territories of Spain and their properties auctioned off. Some 50 years later, after the Restoration brought back the old order, the Jesuits would be allowed to return, but they never regained their old power.

Today in Colombia the Jesuits run many educational institutions, the most best-known of them being the La Javeriana Universities in Bogotá and Cali. La Javeriana is the only private university I know of with any reputation for leftist activism. They also have several prominent high schools, including the Colegio San Bartolomé. The Jesuits also established the Bogotá-based Center for Investigation and Popular Education (CINEP), which studies poverty, armed conflict and environmental issues.

A bit surprisingly, given the Jesuits' vocation for the poor and independent thinking, none of the Colombian priests-turned-guerrillas have been Jesuits. Recently, however, two Jesuit priests at La Javeriana U. have been disciplined by the Jesuit hierarchy for violating church doctrine. One spoke out in favor of abortion and another questioned the virginity of Mary, the mother of Jesus.

Which brings up another contradiction in Pope Francis. Despite the Jesuit's reputation for progressivism and independent thinking, in Argentina Francis collaborated with Popes John Paul and Benedict to eliminate Liberation Theology ideas from the Argentine church. Liberation Theology, which urges believers to imitate Jesus's actions and values rather than his supposed holiness, was pioneered by Colombian priests.

A Flea Market Without a Name 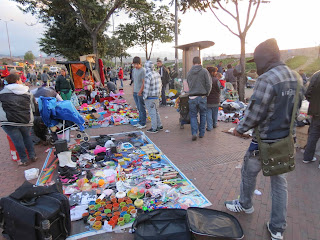 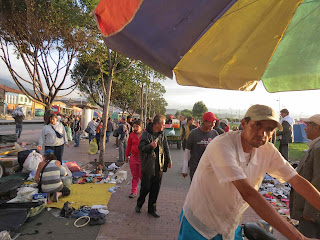 But Bogotá has lots of other flea markets, where you won't find any fine art or antiques. Instead, people hawk random stuff to make a peso, and customers look to save a peso. This one forms spontaeneously each Sunday on the sidewalk of a run-down stretch of Carrera 10, beside Tercer Milenio Park. Here, the selection run towards used toys and clothes, old equipment and bicycles - possibly stolen.

I bought a pair of shoes, Made in Vietnam, and some used batteries for my old cellphone. Perhaps they'll hold a charge. But if they don't I'll only have lost 1,000 pesos each.

Tercer Milenio Park itself was created on the site of El Cartucho, a neighborhood notorious for crime and vice which was bulldozed in 2004-5. So the flea market, in a way, provides a reminder of the old neighborhood. 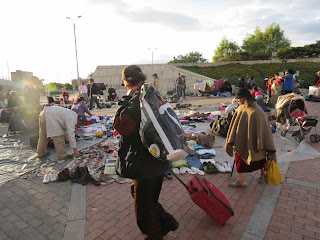 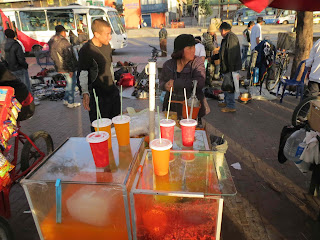 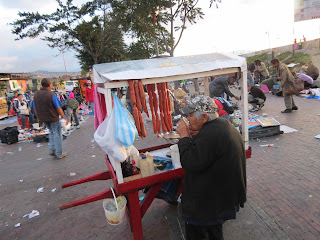 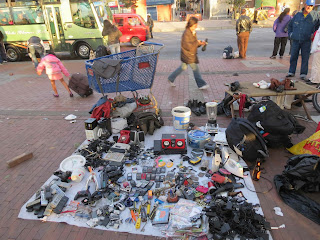 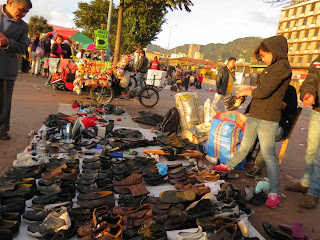 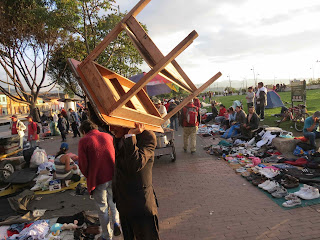 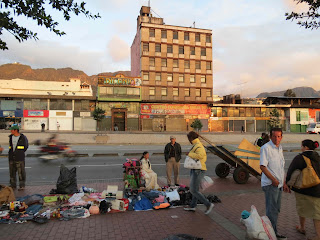 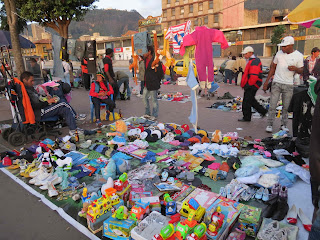 The Axis of Killing

At the risk of being associated with a United States president of limited intellectual and moral capacity, it's hard not to call the triumvirate of tyrranies which blocked the United Nations Arms Treaty yesterday evil, evil, evil.

North Korea, a totalitarian dictatorship which has millions of its own people in concentration camps and threatens nuclear war to get attention; Syria, who dictator is massacring his own people; and Iran, which has also threatened to annihilate at least one of its neighbors, have blocked an arms treaty which could cut the ongoing slaughter of civilians around the world.

The arms treaty would, finally, impose some common-sense rules on the international traffic in weapons ranging from handguns to surface-to-air missiles. The treaty would, among other things, try to keep weapons out of the hands of murderous dictatorships. Maybe that's why these three regimes oppose the treaty.

The question shouldn't be whether or not to approve this treaty, but why such common-sense rules weren't created many years, civil wars and massacres ago.

The treaty is strongly supported by both Mexico and Colombia - nations which have been scourged by firearms violence fed by the globe's unrestricted weapons trade.

Fortunately, the treaty could still become international law thru a vote by the General Assembly, where support appears to be overwhelming. Then, however, it will have to be signed by individual nations. Nations such as Russia and China, which have sold weapons to authoritarian regimes, will probably resist
signing, as will nationsl like Pakistan, which wants to weapons to threaten India, at the expense of its own children's food and education. For its own part, the U.S.'s powerful and paranoid gun lobby opposes the treaty because, it says, it could restrict private ownership of guns - even tho both the treaty's authors and independent analysts say that won't happen.

Ironically, the treaty would actually benefit the wealthy arms exporters in North America and Western Europe which already apply strict controls to their arms sales. That certainly doesn't make it right to hawk weapons to nations which lack money for food and schoolbooks, but it's a little bit less evil.

Ironically, one of gun rights' fundamentalists' strongest arguments is the supposed need for citizens to protect themselves against a tyrranical government. So, it's ironic that gun rights defenders are allying themselves with and defending the interests of exactly such dictatorial regimes, which obviously are not worried by a free trade in arms.
By Mike Ceaser, of Bogotá Bike Tours
Publicado por Miguel en 9:09 PM No comments: 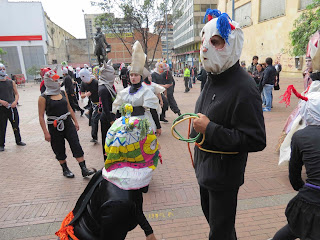 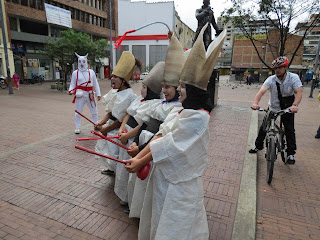 This irreverent, perhaps even heretical, theatre group from Ecuador did a silent performance this afternoon on the plaza across from the Iglesia Las Aguas.

Judging from many of their costumes, I suspect that it was no coincidence they did this during Easter Week, and across the street from a very traditional Catholic church. 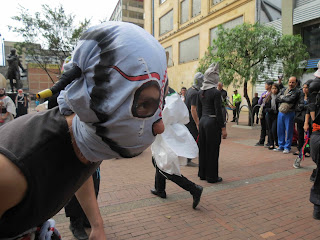 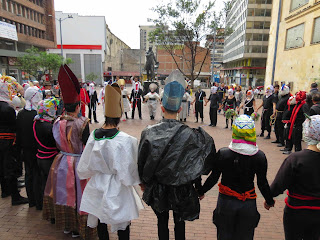 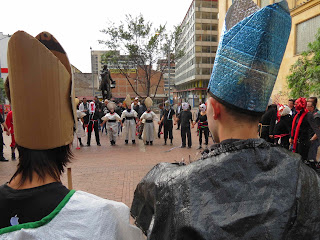 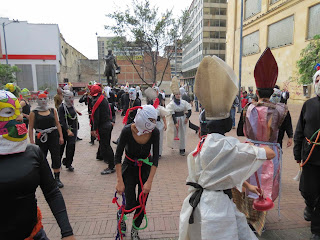 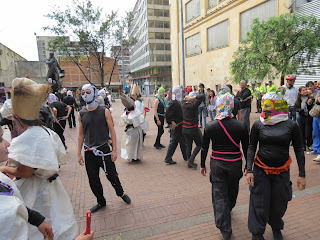 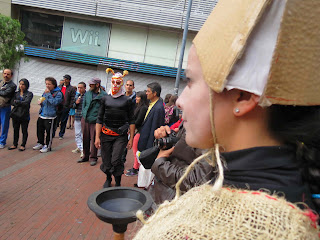 
The Congregation of the Iglesia de Egipto, perhaps the most active and observant among the churches of central Bogotá, held their annual Easter parade today thru the streets of La Candelaria.

It's a colorful, impressive affair. Nevertheless, a friend who participated in the parade two decades ago told me that back then 'it was ten times bigger.' Or, perhaps memory exaggerates. 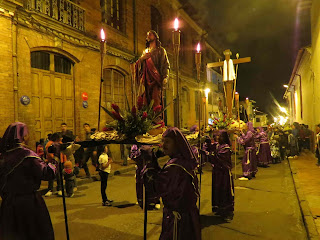 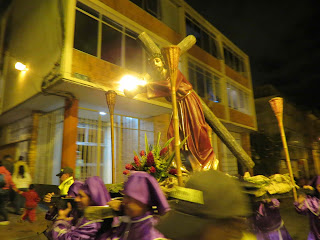 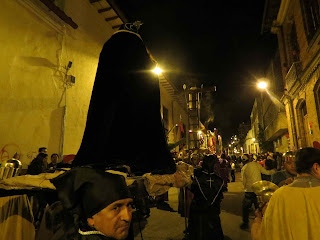 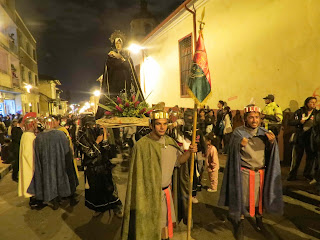 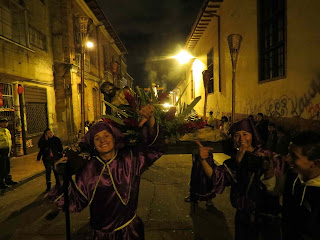 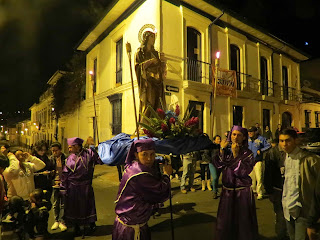 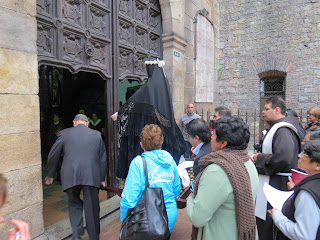 On the 28th and Good Friday, thousands of Bogotanos fulfilled the annual tradition of visiting 'Los Siete Monumentos', or seven churches. 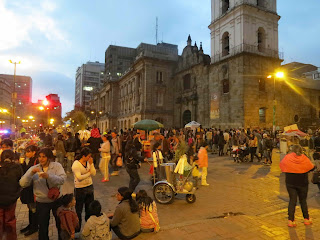 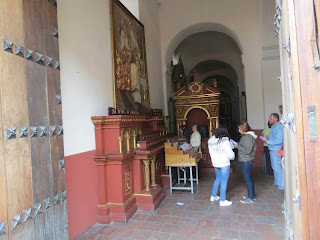