Is anybody surprised? The pedestrianization of the few blocks of Carrera Septima between the Plaza Bolivar and Jimenez Ave. was supposed to be finished by February. But the project has been prolonged three times now, and is now projected to be completed in August. Undoubtedly, the project's price tag has similarly elevated.

Certainly, the pedestrianization will be a huge improvement, of course, transforming a chaotic, noisy, polluted avenue into a pleasant place for walking, shopping and watching street performers.

But the project's price tag should serve as a warning for advocates of building a subway in Bogotá. Such as project will be infinitely more complex and expensive. Does anybody really believe that it won't take lots longer than the official projections, or cost a whole lot more.

A metro, just like the pedestrian-friendly Carrera Septima, will be great to have. But Bogotá shouldn't embrace the metro based on false or unrealistic premises. 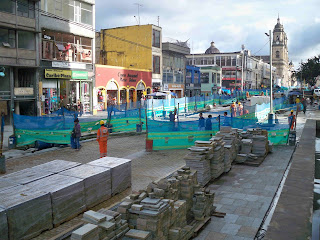 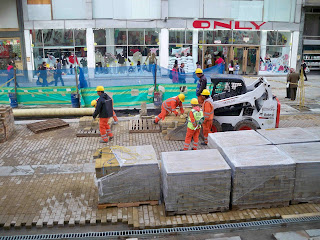 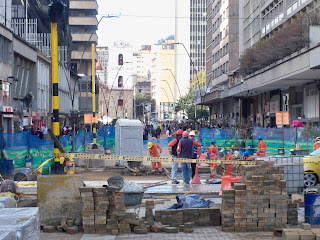 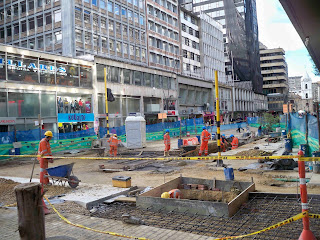 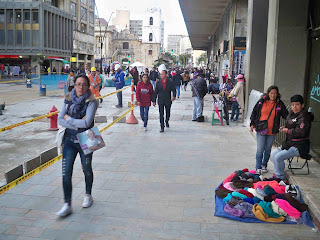 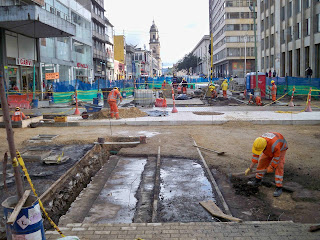 The Convoluted Case of Álvaro Gómez

Álvaro Gómez Hurtado was like a comet across Colombian journalism and politics during the 1980s and '90s.

The son of ex-president Laureano Gómez, Alvaro worked for his father's newspaper and other publications as well as serving as Bogotá city councilman, in both houses of Congress and as minister and ambassador in various nations. A leading member of the Conservative Party, he ran three times unsuccessfully for president. In 1998 he was kidnapped by the M-19 Guerrilla group, who were demanding the convening of a Constitutional Convention. The guerrillas achieved their goal, and Gómez Hurtado served in that convention.

Gómez then became an academic, helping to found two universities. But he may have signed his own death warrant by becoming a furious critic of Pres. Ernesto Samper, who was embroiled in a scandal over drug cartel financing of his presidential campaign, known as the Proceso 8000.

"The regime must be overthrown," Gómez said in at least one interview.

In Novemember, 1995, as he left a university, Gómez was gunned down.

His assassination has never been solved. Pres. Samper, guerrilla groups, paramilitaries drug cartels and others have all been suspects in the killing.

Ignacio Londoño Zabala, today an attorney with ties to criminal gang leaders, may have played a role
in the assassination.

And now, Londoño's assassination may guarantee that the mystery will never be solved.

Londoño, an attorney and local politician in Valle del Cauca with ties to drug cartel leaders, was gunned down the other day in Cartago, Valle del Cauca, where he was a candidate for mayor.

Londoño had given two of his bodyguards the weekend off and sent the third to do a chore in Bogotá. Londoño was in his office when someone shot thru the window, killing him.

Londoño was allegedly linked to the Proceso 8000 as well as various drug cartel leaders. Investigators wanted him to testify about Gómez's killing.

The Londoño killing is itself the subject of mystery, which will likely never be resolved. Was he killed because of his campaign for mayor? Because of his possible declarations in Gómez's assassination? Because of his links to drug cartel leaders?

The Gómez-Londoño saga is yet another example of the intersection of politics and violence, which so often ends in impunity.

Big Brother Really is Watching Us


For the life of me, I can't comprehend why this news item didn't produce big headlines here. According to an e-mail hacked from the Italian cyber-security company named Hacking Team, the United States Drug Enforcement Agency monitors - or intends to - all of Colombia's Internet traffic. All of it.

Presumably, the DEA's interest is limited to catching drug traffickers. But everything you do online here: that dubious website you clicked on, those erotic e-mails, those really stupid, offensive jokes you forwarded, are potentially vulnerable to monitoring. And that's in addition to other Hacking Team software possessed by the embassy "known as Remote Control System or “RCS,” (which) is capable of intercepting phone calls, texts, and social media messages, and can surreptitiously turn on a user’s webcam and microphone as well as collect passwords," according to Vice News. And all of that is in addition to monitoring by the U.S.'s NSA, CIA, as well as whatever monitoring Colombia's own government is doing.

No wonder typewriters are coming back.

Since this monitoring of Colombian residents is being done by the U.S., a foreign nation, there seems to be no oversight or privacy protection here.

Is it just me, or is it really mind-boggling that, in a time of peace, our communications can be read over by strangers? And in the name of the failed War on Drugs? If the government suddenly decided to read whatever letters people still write on paper and stick into envelopes, you can bet there'd be protests. But we seem to be resigned to being monitored on-line.

Meanwhile, over in Venezuela, the state communications company CONATEL is reportedly helping President Maduro's regime identify critical Twitter users so that they can be arrested and imprisoned

A City Under Siege?

If Bogotá feels as tho it's under siege these days, there's a reason for that. Two small bombs, called 'petardos' exploded last week, injuring more than a dozen people. The bombings may have been intended to mark the 50th anniversary of the ELN, who are Colombia's second guerrilla group. Other small bombs set off on central Bogotá plazas injured nobody but scattered ELN literature. 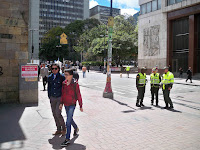 Whenever dramatic, violent events like this one make headlines and turn out the high security, it's impossible not to observe that mundane dangers, such as air pollution, malnutrition and traffic accidents, kill and injure many more Bogotanos, but never generate such an official response or public concern.

What's Going On With ISAGEN?

You've probably seen posters and protesters about ISAGEN, which is Colombia's 3rd-largest electricity generator, providing 16% of the country's energy. ISAGEN is a multi-billion-dollar company headquartered in Medellin and owner of 5 hydroelectric generating plants and 1 thermal one.

But if ISAGEN is a keystone to Colombia's economy and infrastructure, it's also a valuable company, 57% owned by the government. And the president sees it as the golden egg whose sale can finance construction of Colombian infrastructure, particularly highways.

But is it a good idea for Colombia to let such a critical piece of its economy pass into the control of foreigners? So far, French, Canadian and Chilean companies have expressed the most interest. Will they find it in their interest to manage the company well, to invest in it? What if the buyer goes bankrupt one day?

But ISAGEN workers unions are protesting the sale, fearful that privatization will bring layoffs and other cutbacks, as usually happens. And, as always happens when a big public company is to be privatized, opponents call it a threat to national sovereignety - which it very well may be.

The other day, in response to lawsuits, a judge temporarily suspended the sale, sending ISAGEN's shares tumbling and even causing the peso's value to dip. 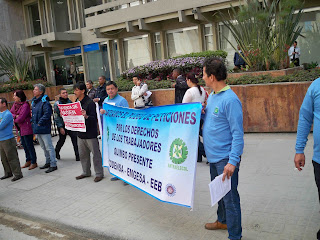 The news that Colombia's coca leaf acreage leapt 52% in 2014 might have leaders rethinking their decision to stop spraying with glyphosate, the herbicide commonly known as Round-Up.

Colombia recently decided to stop using the broad-spectrum herbicide, justifying its decision using a World Health Organization assessment calling the chemical a 'probable carcinogen.' However, the WHO's evidence seems weak, and many analysts thot that the Colombian government's decision was rather a peace offering to the FARC guerrillas, who have long demanded an end to herbicide spraying.

But now, it turns out, the bulk of the spread of coca leaf plantations took place in areas where spraying is not allowed,

But aerial herbicide spraying, is, at best, just the slowest way to lose the war. Even with aggressive spraying in Colombia, along with manual erradication in Peru and alternative development in Bolivia, cocaine has gotten cheaper in many developed nations.

But Colombia's coca leaf crop may be booming for multiple reasons. Some suggest that campesino farmers are planting more coca in the hope of eventually receiving benefits from the government for eliminating it. Others speculate that economic troubles in rural areas, such as the collapse of pyramid schemes and the drop in the price of gold, might have pushed desperate farmers to plant coca. Or, the guerrillas might be pushing farmers to plant more coca in order to make money before any peace treaty ends their coca business.

But the biggest cause is probably much simpler: The price of coca leaf has leaped recently, making the crop lots more profitable. The price leap is particularly bad news for drug warriors, since it means either that narcotraffickers are either finding better ways to ship their product north, or that demand is rising in consumer nations, particularly as the U.S. and Europe.

There is one sure way to stop losing the War on Drug, which is to declare victory and legalize the industry.

Paulina Takes on The Donald

When multi-billonare Donald Trump insulted Mexican immigrants during his Republican presidential candidacy announcement by branding them drug traffickers and rapists, he must have expected blowback from business and media. But he probably didn't expect criticism from the winner of the Miss Universe pageant, which Trump half owns, Colombian Paulina Vega.

But Vega dared to bite the hand that feeds her, calling Trump's comments "unjust and hurtful," but not renouncing her Miss Universe title. Vega argued that the Miss Universe pageant organization is independent of Trump. However, NBC television, which owns the other half, saw things differently, deciding to cut its business relations with Trump.

Trump's insults of Mexican immigrants are absurd, of course. (And I bet that he used 'Mexican' as shorthand for Latin Americans in general.) While they include criminals, the overwhelming majority are hard-working people who are willing to do work which native-born Americans are not. And, I'd be willing to bet, that Trump's construction projects (many named after himself) employed many Mexican immigrants, whether directly or thru subcontractors.

Trump, whose mother immigrated to the U.S. from Scotland, has been accused of making racist and racially-charged comments about Hispanics and African Americans in the past, according to his Wikipedia entry.

On the other hand, Trump is correct that Vega is being hypocritical by keeping a crown awarded by a man whom she criticizes. Yet, her interest in not cutting short her year of fame and glamour, as superficial as it is, is understandable. Undoubtedly, she worked and dreamed for years about becoming a 'Miss.'

But if Vega did renounce the crown on a principled defense of Latin Americans, she'd gain a much more enduring fame than the crown itself can supply.

The sellers charge that the law equates doing retail business with criminality. But not all commerce is criminal, just that which doesn't pay taxes or follow laws.

The trouble for the San Andresitos is a simple one: Their cheap cheapo business model is based on one thing: contraband goods, and many of those are linked to money laundering.

Tough luck for them. But they should look at the bright side - the government has never effectively enforced such laws, and they're unlikely to do so this time. 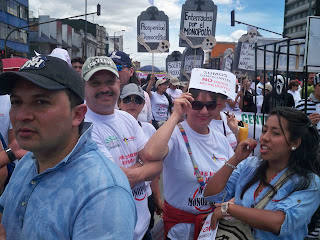 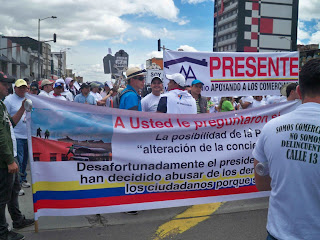 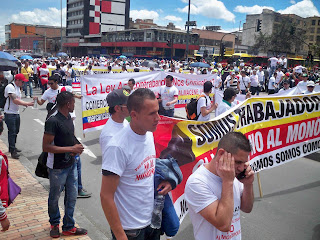 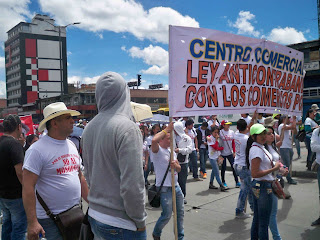 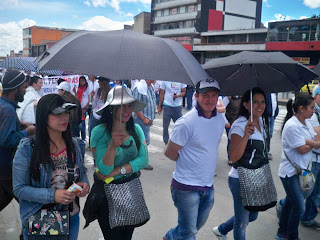