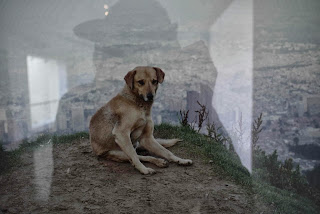 United States photographer Alec Soth was evidently enchanted by Bogotá while he lived here during the adoption process of his daughter a few years ago. And he recorded his impressions, many of them of dogs, and now has them on display in the Museo de Bogotá in La Candelaria. 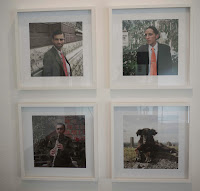 I'm no judge of photography, but that has never stopped me from expressing opinions. I'm not exactly sure what gives these photos more artistic value than photos of dogs which most people could take. For a Bogotá resident, who sees these same sorts of dogs and bogotanos every day, the photos seem routine. But they might be interesting for someone who's never visited here, particularly if the only images of Colombia they've seen involve drugs, bombings and kidnappings.

But art is all subjective, and Colombian adoption is more interesting to talk about.

Historically, Colombia seems to have been a fairly popular source for adoption, particularly for Scandinavian families - in any case, a good number of Scandinavian families with children, as well as Scandinavian young people who were adopted from here have come to do bike tours as a way to get to know their birth country. Not all adoptions have been completely aboveboard: One young woman who did the bike tour told me she'd tried locating her birth family only to discover that her adoption papers had been falsified. 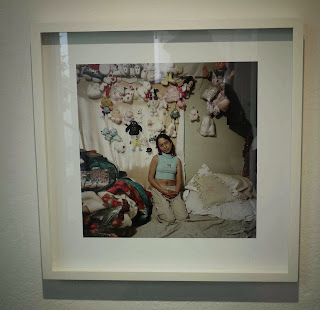 But in recent years, following scandals, Colombia has made the adoption process longer and more demanding and given priority to Colombian families over foreign ones. In mid-2012, Colombia put a hold on new applications from foreigners for children under six years old who don't have either physical or mental problems.

Despite these new restrictions, as well as long waiting times, Colombia seems to be receiving lots of attention from adoption agencies because many other countries have restricted foreign adoptions even more.

Adoption can be a wonderful thing, and the adoptees from Colombia I've met have seemed generally healthy, happy and satisfied with their lives (altho those who were not probably wouldn't have come to visit in the first place). But adoption can go wrong, and adoptees are sometimes exploited. Read this jarring Reuters investigation about how U.S. families 're-home' adopted children they don't like using online networks. 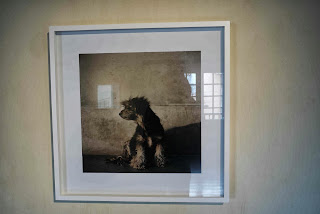 And, disturbingly, I found at least one adoption site with this glib pitch which focuses on the adoptive families' convenience, not so differently from selling any sort of inanmate product.

Medical and psychological evaluations are provided with all referrals, providing a complete overview of the child a family is adopting. These wonderful children are often home in as little as six months. For families who want to provide a home to an older child, Colombia is a perfect adoption option....

Why Adopt From Colombia

Sibling groups are available of all ages 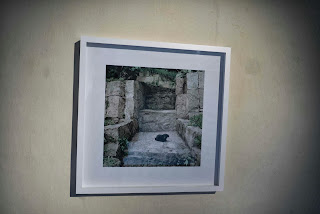 It makes me wonder whether, pitching children this way, however positive the intentions may be, only sets families up for disappointment and rejection when parenting turns difficult.

The best-known adoption of Colombia children in recent times was that of two young boys by a New York Times reporter who is gay. Predictably, conservatives tried to block the adoption. I haven't seen anything since about how the boys are doing. According to adoption websites, Colombia now frowns on gay couples and single men adopting from here. 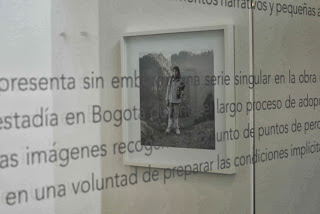 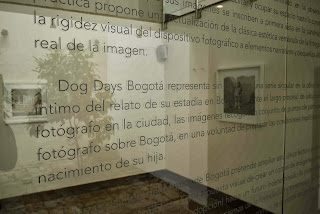 Anarchism: The Dream that Never Was 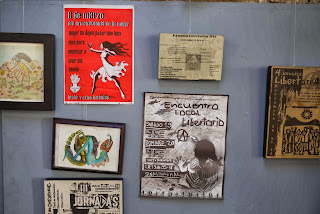 Anarchism has gotten a bad rap. Say the word, and most of us think chaos, mindless violence and destruction. But, if anarchy can be those things, its theory is very different: cooperation, harmony and complete equality.

What's the reality? We may never know, since true anarchism has rarely, if ever, been tried.

Anarchism, in its idealized - if often unsettling - form is on display now in La Aldea, a cafe and cultural center on Calle 17, in La Candelaria, where the Second Anarchist Fair of Books and Fanzines is going on now.

Anarchism involves lots of pamphlets, both because that's how anarchists have traditionally spread their message, and because anarchism has so few concrete real-world examples to display.

In La Aldea the tables display pamphlets about abolishing work, sneaking into TransMilenio, the justice of robbery and technology as a system of domination. The System, then, in the form of everything that is organized, is a threat. 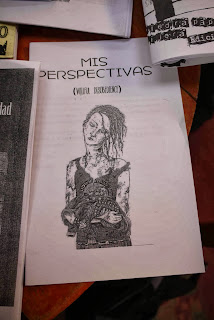 I didn't make the attempt, but I suspect that if I'd tried stealing those same pamphlets, the anarchists would have objected. And, as for technology, the minimally organized internet has become a tremendous platform and advocacy tool for anarchists and other anti-establishment organizations.

It seems to me that anarchism, a bit like its cousin communism, is a wonderful idea until it collides with selfish, violent and lazy human nature. Anarchism, which envisions a world without laws, capitalism or government, in which people cooperate spontaeneously and unselfishly, has rarely been tried - and perhaps there's a reason for that.

History's best known example of a supposedly anarchist society was the Paris Commune of 1871. But, however truly anarchist the Commune may have been, the fact is that it lasted only a few months and consisted of a small population of highly motivated people. Squats and communes may also call themselves anarchist. But decide for yourself whether a stateless, non-hierarchichal society could replace the modern state. After all, the places on Earth which most approach that stateless condition - Somalia, regions of The Congo and even remote parts of Colombia, also happen to be some of the most violent, miserable parts of the Earth.

And what about sneaking into TransMilenio without paying as a step toward overthrowing the Establishment? I guess it's too much to ask how the transit system will be paid for if passengers don't - except by that evil government which the anarchists mean to abolish.

Whatever its true nature, anarchism has become closely and probably justifiably linked to violence and the figure of a youth hurling a lighted hand grenade has come to symbolize the movement. It was an anarchist, after all, who murdered an archduke and triggered World War I, and anarchists are blamed for the violence and pillaging committed during recent protests in Bogotá. 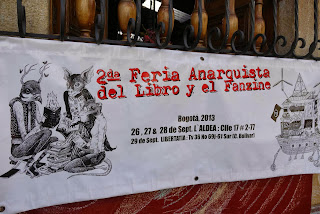 Wilson of the Red Light District 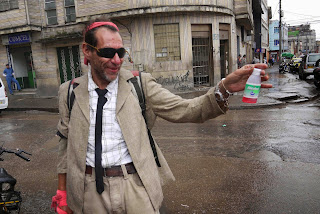 We often run into Wilson while passing thru Santa Fe, the central red light district, during bike tours. Wilson is killing himself by drinking rubbing alcohol, but he's doing it cheerfully. I have no inkling about what Wilson lives off of, but he generally seems to have bathed and washed his clothing.

And Wilson retains a sense of curiosity. He was delighted to learn the meaning of 'Chicken Hell', the fried chicken place in the heart of Bogotá's low-life red light district. 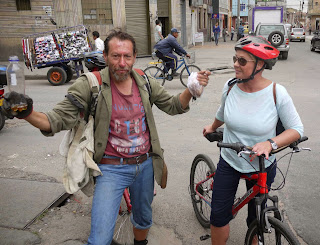 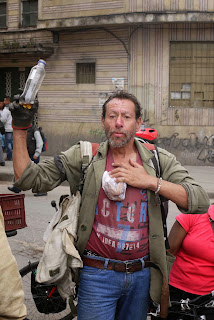 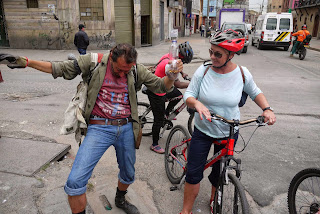 Pres. Santos In His Labyrinth

Just months ago, Pres. Santos was flying high: His poll numbers were high, thanks to a growing economy and progressing negotiations with the FARC guerrillas and no strong political rivals on the field.

Today, the economy continues growing and the peace negotiations continue advancing. Yet, Santos' support in polls has sunk into the 20s.

Some observers link Santos' low popularity to the recent protests and road blockages, but I doubt it. Colombia has had many protests, and the root causes behind the farmers' troubles long predate Santos' presidency.

Could it be that Colombians are just tired of Santos?

In any case, Santos' situation looks to get worse before it gets better. Ex-Pres. Uribe, Santos' one-time political patron and now leading critic, has created his own political party, the Centro Democratico, and announced he will run for Congress. It's a fair bet that Uribe and his supporters will base their campaign on criticizing Santos, likely further chipping away at the president's popularity. A peace agreement with the FARC would surely raise the president's popularity - but the Uribistas' intense criticism of the negotiations looks likely to reduce the government's manuevering room in those negotiations.

At a recent forum in the Universidad del Rosario, Uribe attacked the FARC-government negotiations in Havana:

The negotiations are "a path to impunity for leaders of the guerrilla who have committed crimes ...it's a path which will allow criminals to be elected," to government, Uribe said.

But those formulae have worked before for Colombia, including during Uribe's own administration, when many right-wing paramilitary fighters got slaps on the wrist or no punishment at all for horrific crimes. In 1990, the M-19 guerrillas signed a peace agreement and went immediately into politics. Justice probably was not served in either case, but at least some violent actors left Colombia's conflict (yet, paramilitaries remain in parts of Colombia).

It's ironic that, on the issue of negotiations, Santos finds himself attacked from both sides: from the right by Uribe, his one-time political patron, and from the left by human rights groups, who fear that a potential peace deal will include impunity for human rights violators.

Santos' prospects in next year's elections may depend on how he can spin his opponents, who most likely will be the Polo Democratico's Clara Lopez on the left and an Uribista on the right. And the most prominent Uribista candidate is Francisco Santos, the president's cousin.

In the end, it seems to me, Santos' political fortunes will ride on the talks with the FARC. A success which Colombians can believe in will overwhelm all other political issues, incuding even the economy. But that itself may mean that Santos' opponents will try to slow and even sabotage the talks for their own political interests.

The next months look to be tough for Santos. But if he can end Colombia's conflict, he can both secure his legacy - and the next election.


The winners of a photography contest about Bogotá's iconic Ave. Septima, displayed in the Parque Nacional, coincided today with historic scenes of Bogotá displayed on the walls along Ave. Septima itself. 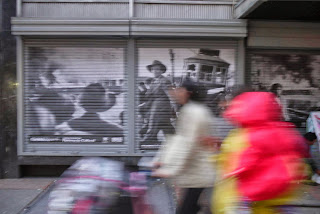 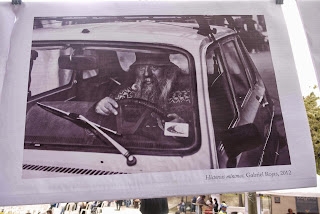 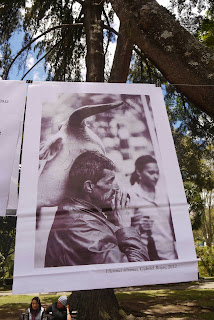 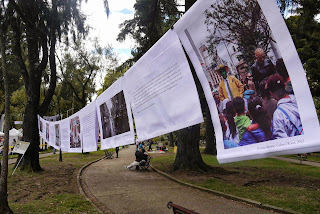 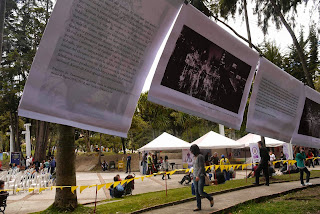 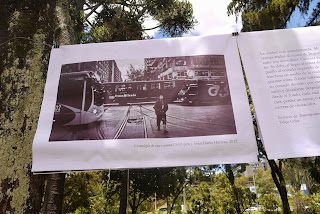 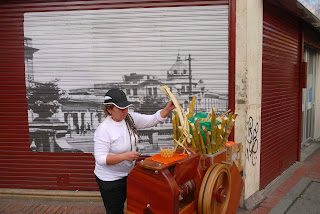 Recently, the The World Games, a sort of mini version of the Olympics, were held in Cali. While the competition itself went well, the event's organizers appeared a little ridiculous when the medals lacked an 'L', meaning they commemorated the 'The Word Games.' (Finally, they used a laser to add the L.) 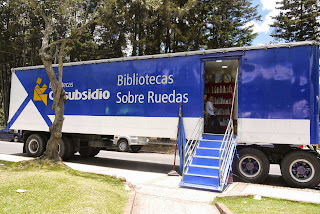 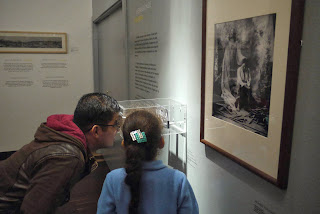 The National Museum has this small exhibition about historical photography in Colombia. In addition to the dated techniques, the photos provide glimpses of Colombian history. 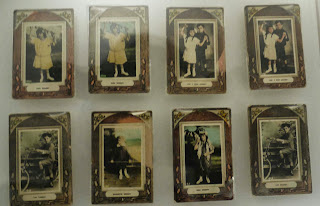 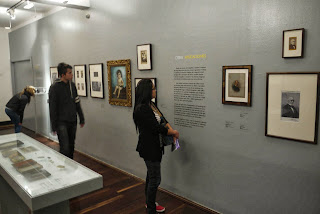 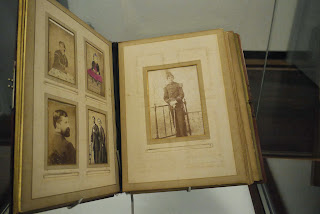