The Tragedy of El Placer, Remembered 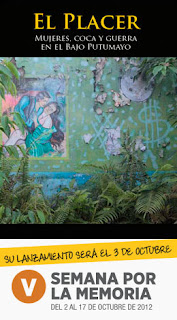 The past few days El Tiempo and El Espectador have published some really horrific accounts of terrible abuses, mostly committed by right-wing paramilitaries, and mostly committed against women, in the terribly-misnamed town of El Placer, whose name means 'pleasure,' in the bajo Putumayo region.

Thankfully, these crimes mostly ended a half dozen years ago, altho that doesn't reduce their horror. The media is publishing these accounts because of the presentation Wednesday evening in the BLAA of a report, entitled 'Women, Coca and war in the Lower Putumayo,' by the Center for Historical Memory as part of the Fifth Week of Remembering. The southern Putumayo region, desired by outlaw groups because of its valuable coca-leaf plantations, had long been dominated by lefist guerrillas, who trampled residents' human rights in their own ways. But in 1999 right wing paramilitaries invaded, driving out the guerrillas and accusing residents of having collaborated with them.

The newspapers publish chilling accounts of women raped and tortured by the paramilitaries, who murdered many residents and forced girls and women into sex slavery. The area's new rulers accused the villagers of having collaborated with the guerrillas or of being guerrillas themselves - even tho townspeople often collaborated only under the threat of death. Similar tragedies were repeated in many parts of Colombia, carried out in some areas by paramilitaries, in others by guerrillas.

The accounts are particularly disturbing in light of Colombia's controversial Justice and Peace Law, which enabled the paramilitaries' demobilization, but was heavily criticized for letting vicious criminals off with only light sentences or none at all, and invite reflection on the negotiations now beginning between the government and the leftist FARC guerrillas.

Ex-Pres. Alvaro Uribe has been the loudest critic of the negotiations with the guerrillas, which he believes will permit impunity. But he conveniently forgets the impunity received by the right-wing paramilitaries - who notoriously fought alongside government forces while Uribe was governor of Antioquia Province and later president of Colombia.

The paramilitary demobilization, with all of its defects, at least reduced the number of civilian massacres and displacements. A possible peace treaty with the FARC guerrillas would undoubtedly have huge flaws, but could also prevent many future human rights violations.


The news that Colombia may allow some prison inmates convicted of minor, non-violent crimes to leave prison during the day is a step toward a more humane, less destructive prison regimen.

That parallel is way off, but does capture some elements of reality. After all, imprisonment stifles lives, destroys families and creates universities of crime. It also costs society a fortune, both in the costs of incarceration and in the loss of productive workers.

But prisoners shouldn't just get free day passes out of jail. That would turn prisons into veritable hotels (albeit no-star ones), whose guests sleep and eat for free and can spend their days as they like - with a great temptation to return to crime.

Inmates should have to earn these benefits, as the policy proposal stipulates, thru good behavior and by doing constructive things in prison, such as working in prison industries. Once out, convicts should be required to hold real jobs, something which the prison system could help them with. After all, society is much better off when a person's working, supporting the economy and paying taxes, rather than rotting away behind locked doors on the government's tab.

As has been well documented, ex-inmates have difficult times integrating back into society and finding jobs, which is a big reason why many return to crime. This new policy, if carried out well, could reduce that problem.

Day passes will also help reduce Colombia's tremendous prison overcrowding, which produces wholesale human rights violations and will mean prison riots sooner or later. This story in El Universal says that one third more prisoners have been packed into Colombian prisons than they were designed to hold. Some, like Bogotá's El Modelo, hold more than double their designed capacity, El Tiempo reports.

Is Bogotá Ready for Public Bikes? 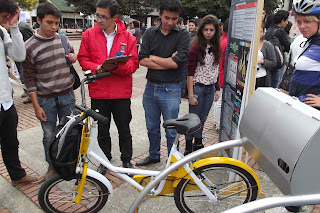 National University students exhibited proposed models for public bikes for Bogotá on the Plaza del Che today, under the watchful eyes of the Cuban-Argentine revolutionary and the guerrilla priest Camilo Torres.

Some of the designs didn't seem practical, since shared public bikes need to be solid, sturdy, inexpensive and easy to use for bike novices. Also, they shouldn't be desireable to bike thieves.

In any case, if students at the National University, where you hear lots of talk about the communist revolution which never comes, can help make public bikes a success, they may deserve credit for a another kind of revolution, in sustainable transit.

Bogotá officials have talked about bringing a public bicycle scheme to Bogotá for years, while doing nothing. Just a few months ago, they promised to have public bikes on the street next year. Bogotá's only public experiments have been mixed. A pilot public bikes program got a positive reception, but was unceremoniously ended. The National University, known as La Nacho, tried offering shared bikes, but the experiment was ended after many bikes got damaged or stolen - even tho the campus is a closed area with guards at the gates. For the past few weeks, the city has lent bikes for free on the 20 pedestrian-only blocks of Ave. Septima. But, since the bikes are free and the street closed to cars, the program could hardly not succeed. 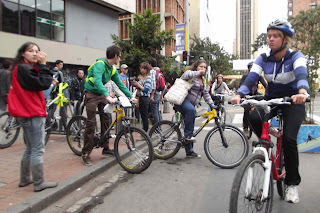 Unfortunately, biking conditions in most of the rest of Bogotá aren't as nice as the car-free Septima and the National University. 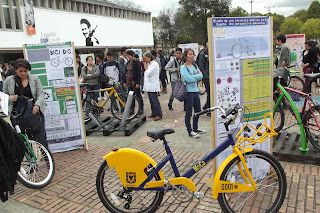 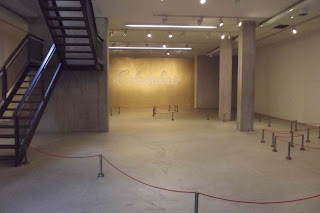 One of the most common mistakes committed by anglophiles unfamiliar with the nation at the northern end of South America is to spell its name 'Columbia.' But the misspelling might represent something much more profound than bad ortography.

An art exhibit, named 'A Nation Belonging to Others,' by Fernando Arias, on now in the NC Galeria in the Macarena neighborhood uses the O vs. U difference to portray two nations: A healthy one with burgeoning biodiversity and lots of indigenous culture, and another that is selling out its culture and biodiversity to outsiders.

Like many modern art exhibits, this one could be visually more interesting. Almost its entire first floor consists of a taut red string describing Colombia's borders, perhaps to illustrate the weakness of the country's frontiers, and the word 'Columbia' on the back wall. Oh, and there's a reworked version of the nation's coat of arms, with rapacious hawks landing on it, and nearby the words 'Sale' in English. On the second floor you'll see a video denouncing mega-mining and a sculpture of Colombia's three Andean mountain ranges that's apparently made from gold. (You can't touch it.)

But if the artwork isn't so impressive, the idea of two Colombias, or a Colombia at a crossroads, is interesting.

And, sadly, the artist's point seems to be true. Colombia has opened itself wide to foreign investment, which has helped drive economic growth, but also appears to be destroying much of the country's biodiversity while creating few good jobs.

Should somebody rename the country?

Incidentally, I'd always wondered why Colombia IS spelled as it is and not 'Colonia' (from Cristobal Colon), or 'Columbia' (from Cristopher Columbus). That, probably, showed my own ignorance. The real reason is that the country's name comes from 'Colombo,' the Italian-born explorers original name. 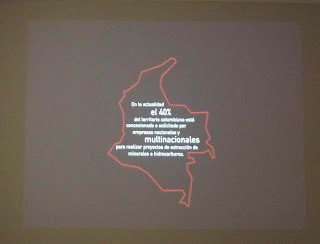 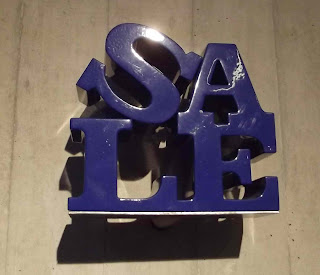 When is a Victory not a Victory? 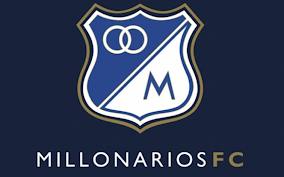 Millonarios has probably been the most successful of Bogotá's major league futbol teams (despite its 8 - 0 crushing by Real Madrid this week).

But some of those victories came in years when the league was drug saturated, and many players and referees bribed.

Now, Millonarios' owners have proposed 'giving back' the team's titles from 1987 and '88, two of the most drug-tainted years, when the team belonged to drug barons.

Millionarios' gesture is a positive one. But, back then, much of the league was financed and threatened by cocaine interests. Should the league just erase those years from its history books?

On the other hand, if Millonarios' loss to Real Madrid is any portent, maybe the team would be better off holding on to its trophies. 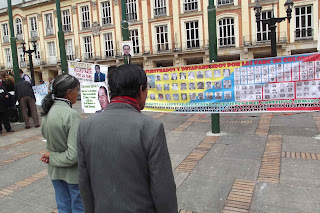 The FARC guerrillas, who are in preliminary peace talks with Colombia's government, say that they have freed all of those they've kidnapped. But these people, who were protesting today on Plaza Bolivar, don't believe them.

Pais Libre, an anti-kidnapping organization funded by the Colombian government, also says that the guerrillas continue holding more than 400 hostages.

In addition to the allegations of continued hostage holding, according to news reports the guerrillas continue recruiting children to turn them into child soldiers, in violation of all sorts of human rights. 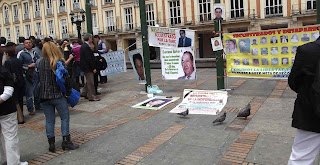 Montesinos' Web is Back in Court 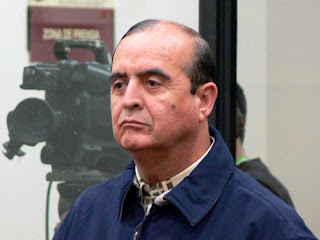 In what seems like a blast from the past, one-time Peruvian svengali Vladimiro Montesinos and 57 others are on trial in Colombia for smuggling arms from Jordan to the FARC guerrillas in 1999.

The 57-year-old Montesinos is not likely to make an appearance at the trial, since he's already serving a 20-year sentence in Peru for the same scheme, which involved a sale of 10,000 assault rifles to the FARC guerrillas. Montesinos, also faces dozens of other charges in Peru, including for drug running and murder.

But the really extraordinary thing about this arms trafficking scheme was its complexity. On trial in -- besides Montesinos are a Spaniard, a Frenchman, a Lebanese, 14 Peruvians and 15 Russians, as well as 24 FARC leaders - some of whom are involved in the peace negotiations with the government, according to media reports. Montesinos, who was Peruvian strongman Alberto Fujimori's right-hand man, denies that he can be tried in Colombia because he's already been convicted in Peru for the same crimes.

Montesinos, incidentally, was for many years on the CIA's payroll.

Who's Caring for La Candelaria? 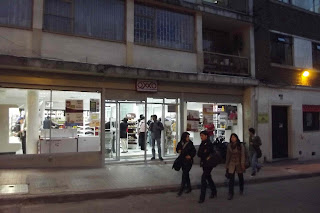 This Oxxo store recently opened on Calle 11 in La Candelaria, just uphill from the Botero Museum and Luis Angel Arango Library. Granted, the building it's in isn't particularly colonial, but Oxxo looks like it belongs in a Southern California strip mall, not Bogotá's historical center.

Oxxo also replaced a small mall containing a half-dozen small, family-owned businesses, including a stationery store, a lunchery, a photocopy place and an Internet cafe - services important to students and residents. What does Oxxo sell? Mostly alchohol and junk food.

Who approved this monstrosity which uglifies the street but adds nothing to the community?

Here are some more buildings which don't seem to belong in La Candelaria: 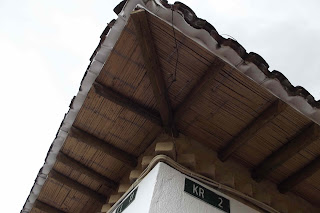 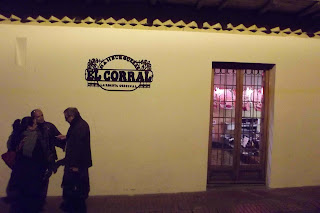 And some other neighborhood scenes.... 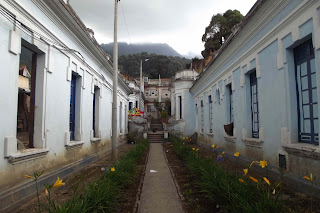 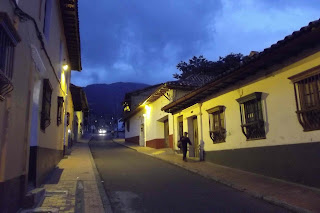 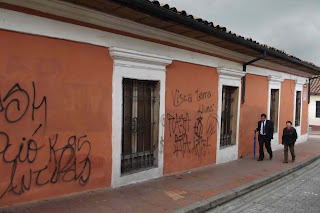 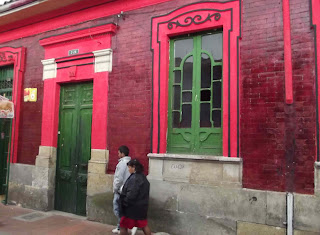 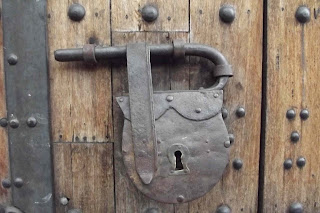 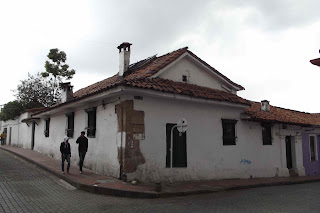