What's it take to be Colombian of the Year?


Colombian media has anointed football star James Rodriguez as 'Colombian of the year.' And Rodriguez sure is good at kicking round objects between upright sticks.

However, it is a sad commentary on human priorities that Rodriguez is now probably the second-
most-famous Colombian, behind only cocaine king Pablo Escobar. My Google search for "James Rodriguez" Real Madrid produced 16.4 million hits, while "Juan Manuel Santos" presidente Colombia produced 7.8 million hits and "Gabriel Garcia Marquez" only a pathetic 1.2 million. (For whatever it's worth, I bet that 100 years from now they'll rank in reverse order fame-wise.)

I'm waiting for someone to explain to me why running behind a ball - across the ocean in Spain, no less - is more important than, say, well - almost anything else.

What does the media's deification of a sports star say about its respect for science, politics, business, teaching, medicine and all those other human endeavors which produce so much to benefit us, but receive little attention or reward?

And, even among prominent athletes, Rodriguez doesn't stand out in much besides athletic ability. He hasn't excelled in philanthropy, even tho he probably leaves enough loose euros behind in his dry cleaning to solve the child malnourishment problem in a lot of Colombian towns, or buy schoolbooks for schools in Ciudad Bolivar.

Rodriguez could employ his fame and the huge admiration he commands (justifiably or not) from Colombians of all kinds - to bring his people together to find peace, stop violence, study harder, or embrace any number of causes, but he hasn't bothered to. Instead, Rodriguez serves unintentionally as an unfortunate role model: How many boys and young men have slackened their studies and focused on futbol because they expect to become the next James Rodriguez? 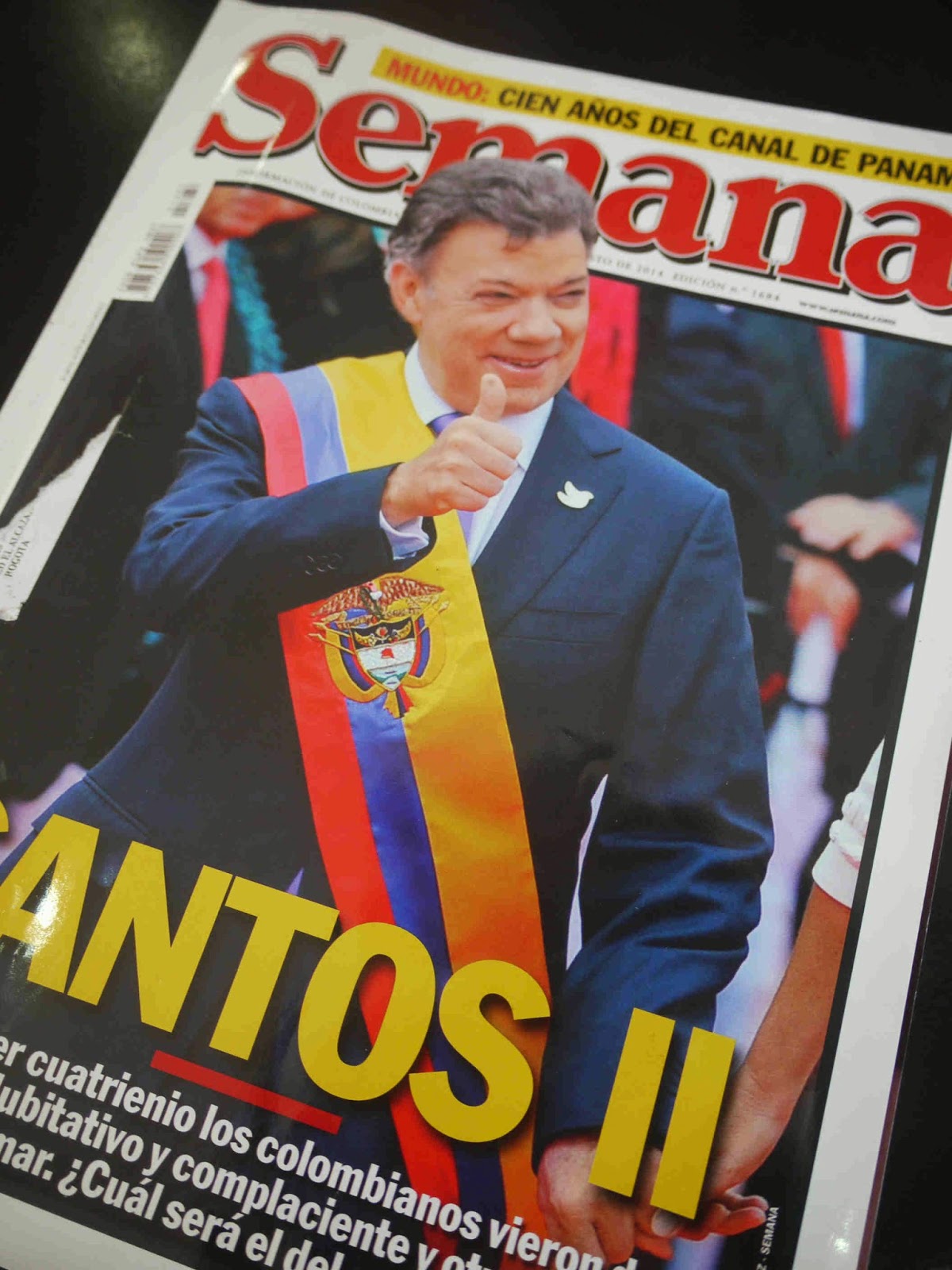 Rather than Rodriguez, how about someone like Gloria Barreto? She's the humble woman who had come to downtown Bogotá (albeit in August 2013) to complain about her water bill when she found herself in the midst of a riot in which youths hurled chairs, tables and rocks at police, who cowered behind their shields. Barreto, a short, apparently frail woman, placed herself between the police and attackers, her arms spread protectively. The rioters paused their attack only long enough to pull her away. A few moments later, an anti-riot tank arrived firing tear gas canisters, and the youths fled.

But when it comes to the 'most important Colombian of 2014', love him or hate him, it's hard not to name Pres. Juan Manuel Santos. He got reelected and carried forward the peace talks with the FARC guerrillas, which appear likely to end Colombia's half-century of armed conflict. In fact, the FARC ended the year with the announcement of their first-ever unilateral cease fire - a milestone in Colombian history, even if it doesn't last. 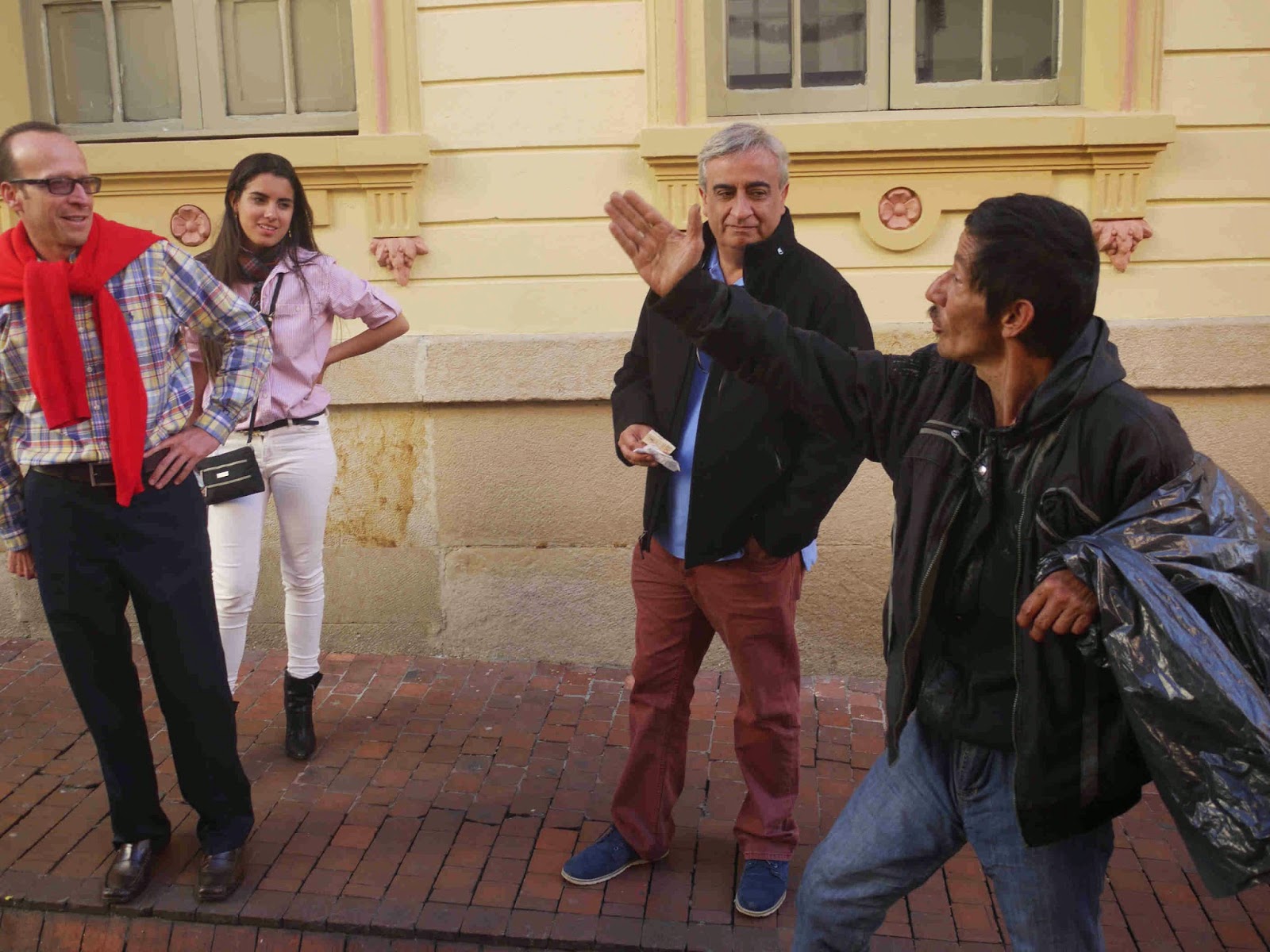 Sergio, a homeless man who frequents La Candelaria, where he's a common sight scavenging stuff from the garbage, also doubles as a tourist guide.

Living on the street and sifting thru garbage provides lots of opportunity for reading, so Sergio stays well informed on current events. And that serves him well as tour guide. For those versed in Colombian politics and its social vocabulary, Sergio's irreverent and pointed commentaries strike home. He talks about the parapolitica scandal, which called into question the legitimacy of the Uribe administration, but has since been forgotten. 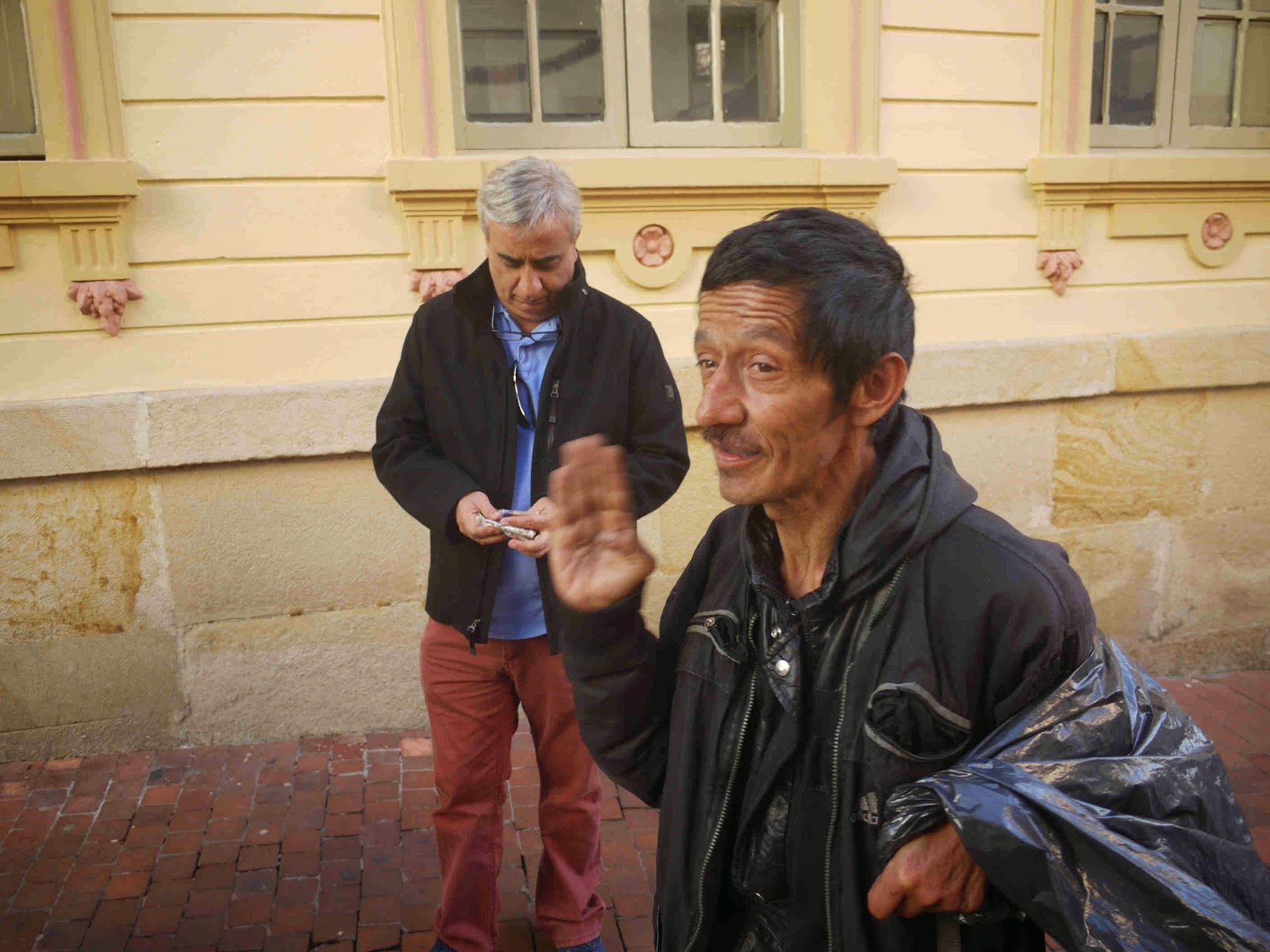 Sergio gets laughs by referring to Congress as a Cartucho of gamines of estrato seis. Translated, he's saying that Congress consists of wealthy street children from the notorious, drug- and crime-ridden neighborhood located a few blocks from the presidential palace, which was bulldozed in the early 2000s.

Sergio asks his audience for a few thousand pesos, and gets them. He also hits me up for a few bills, "to pay for my room.

"I'm no longer living in El Bronx," he says proudly.

Maybe not. But he shuffles off downhill in that direction. Maybe he's not living there, just shopping there. 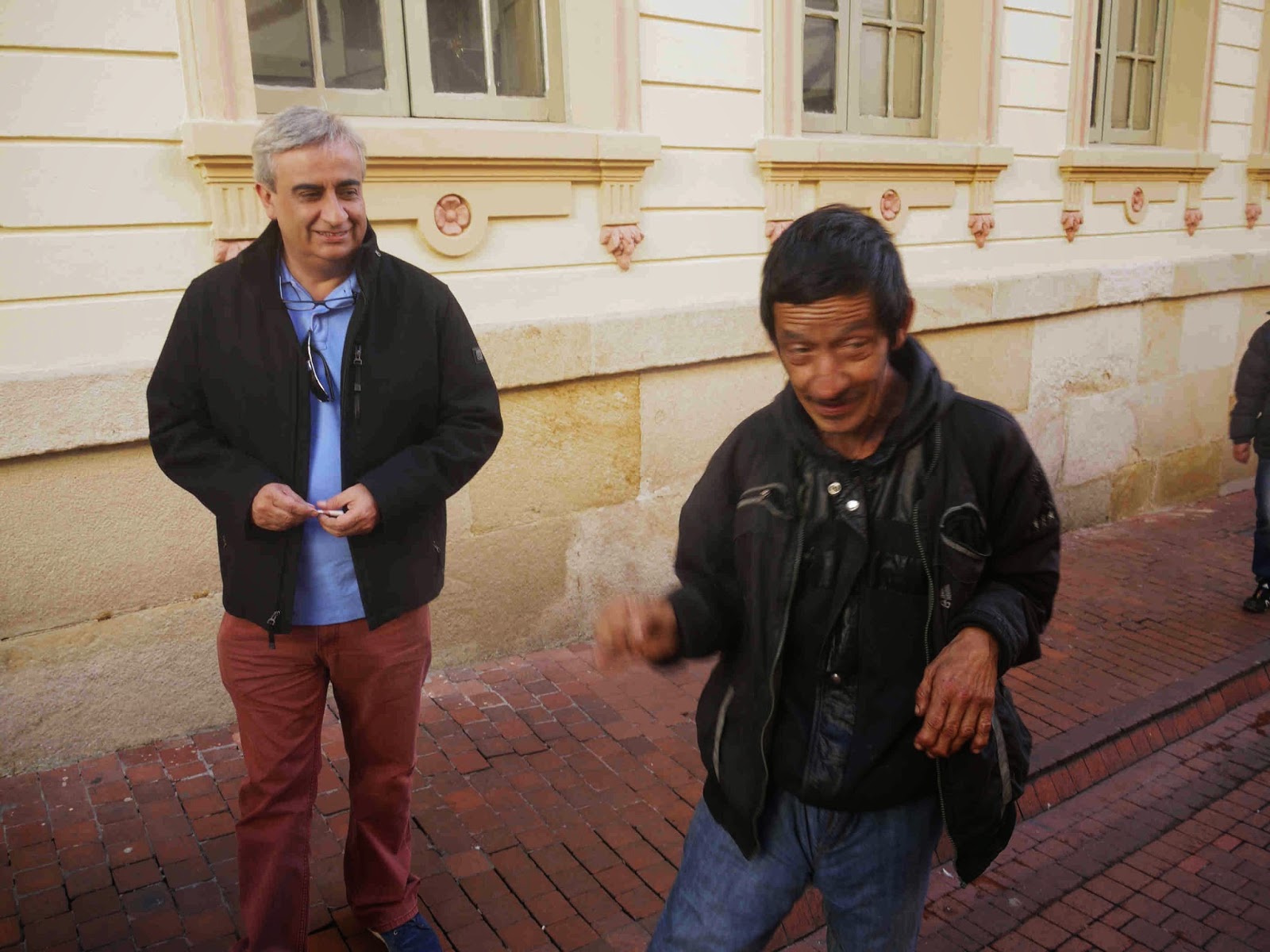 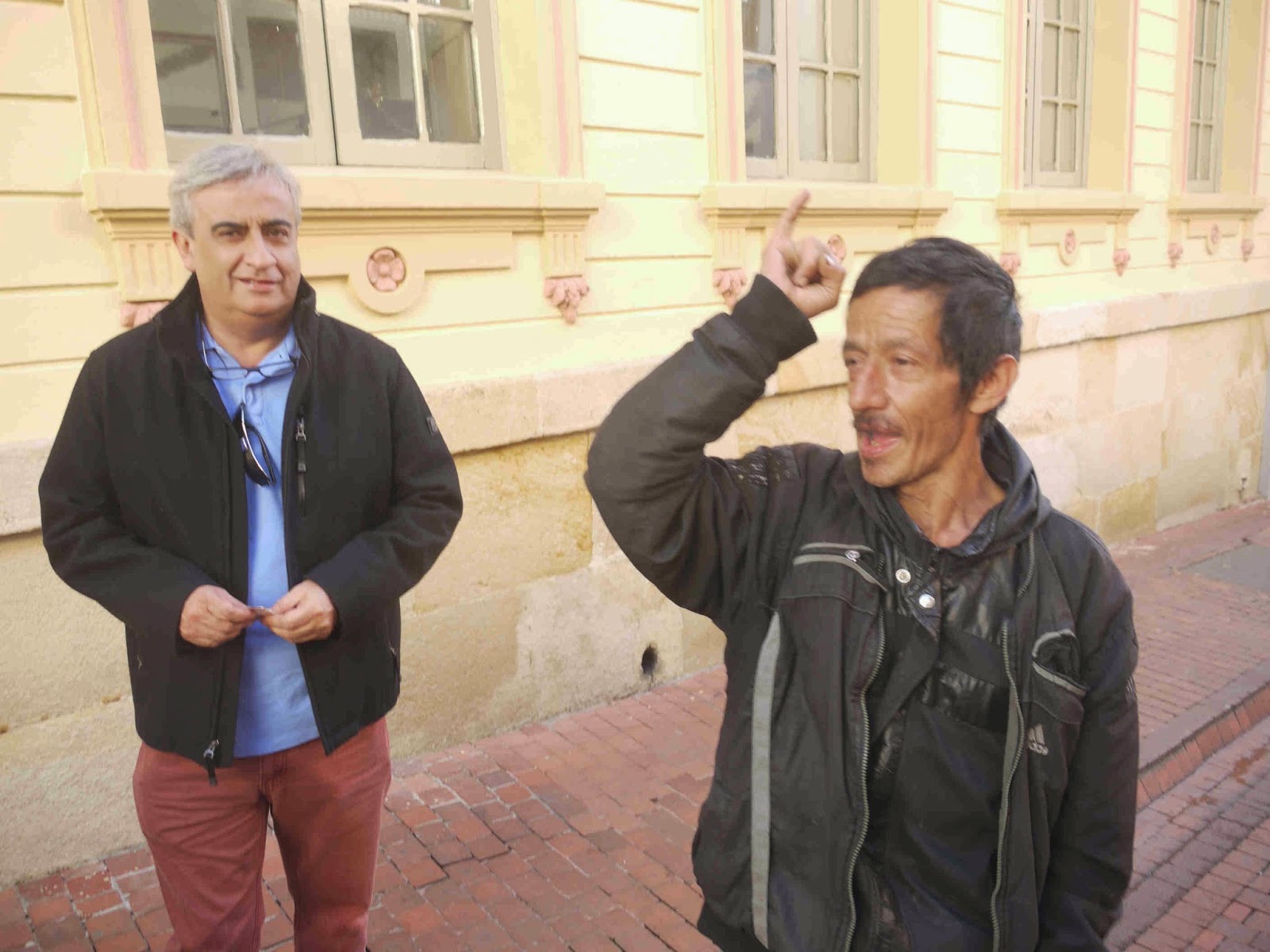 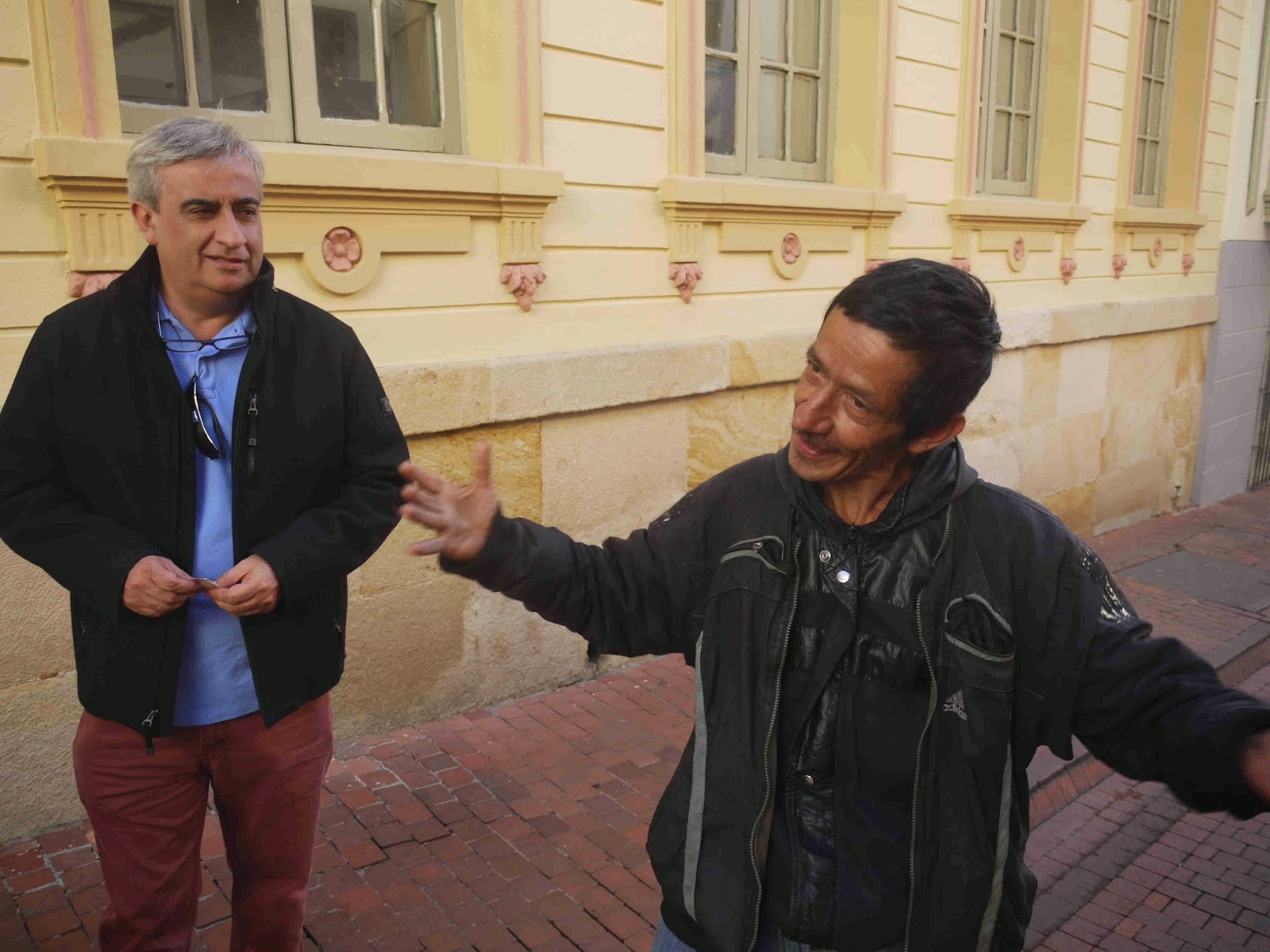 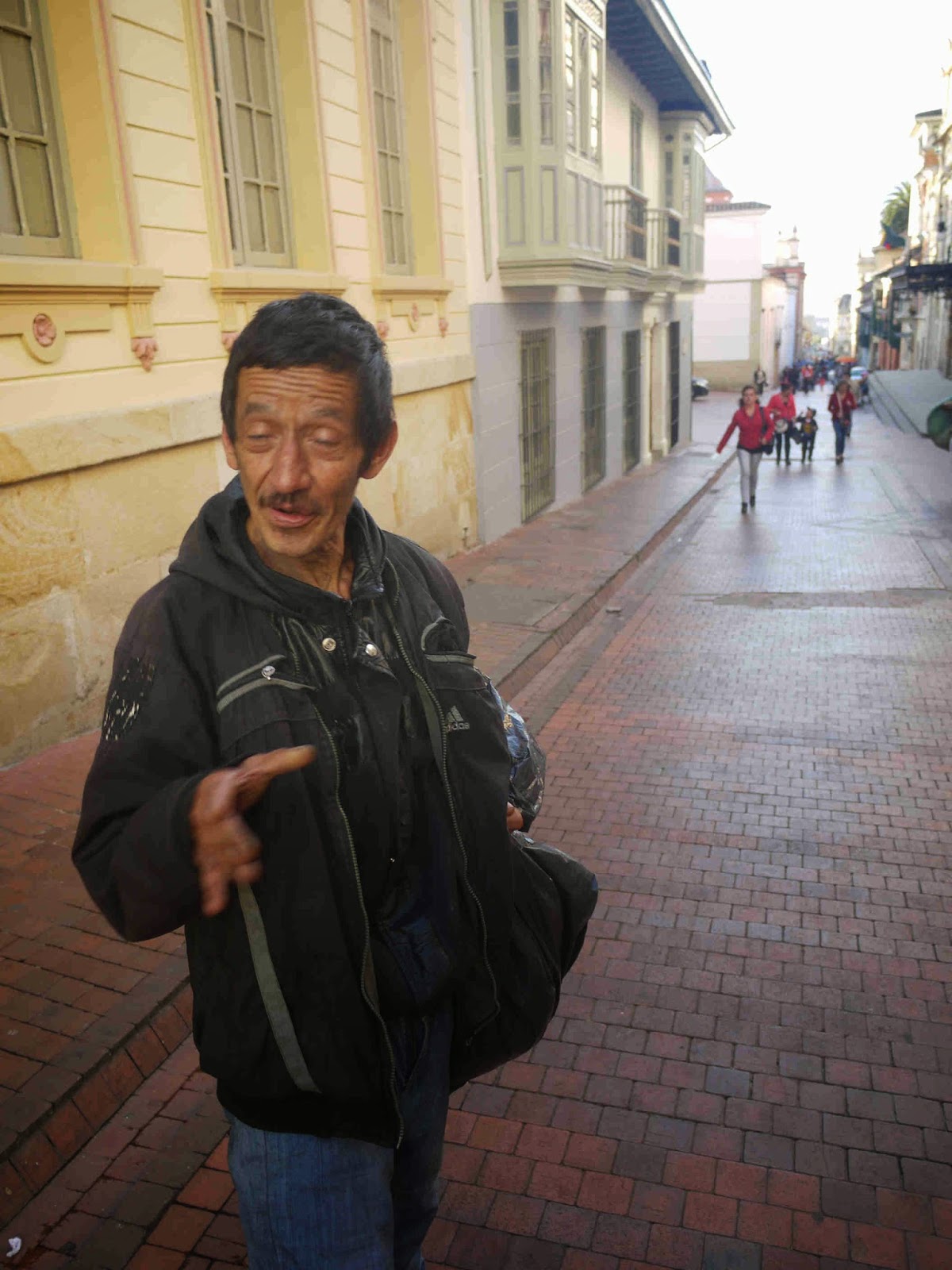 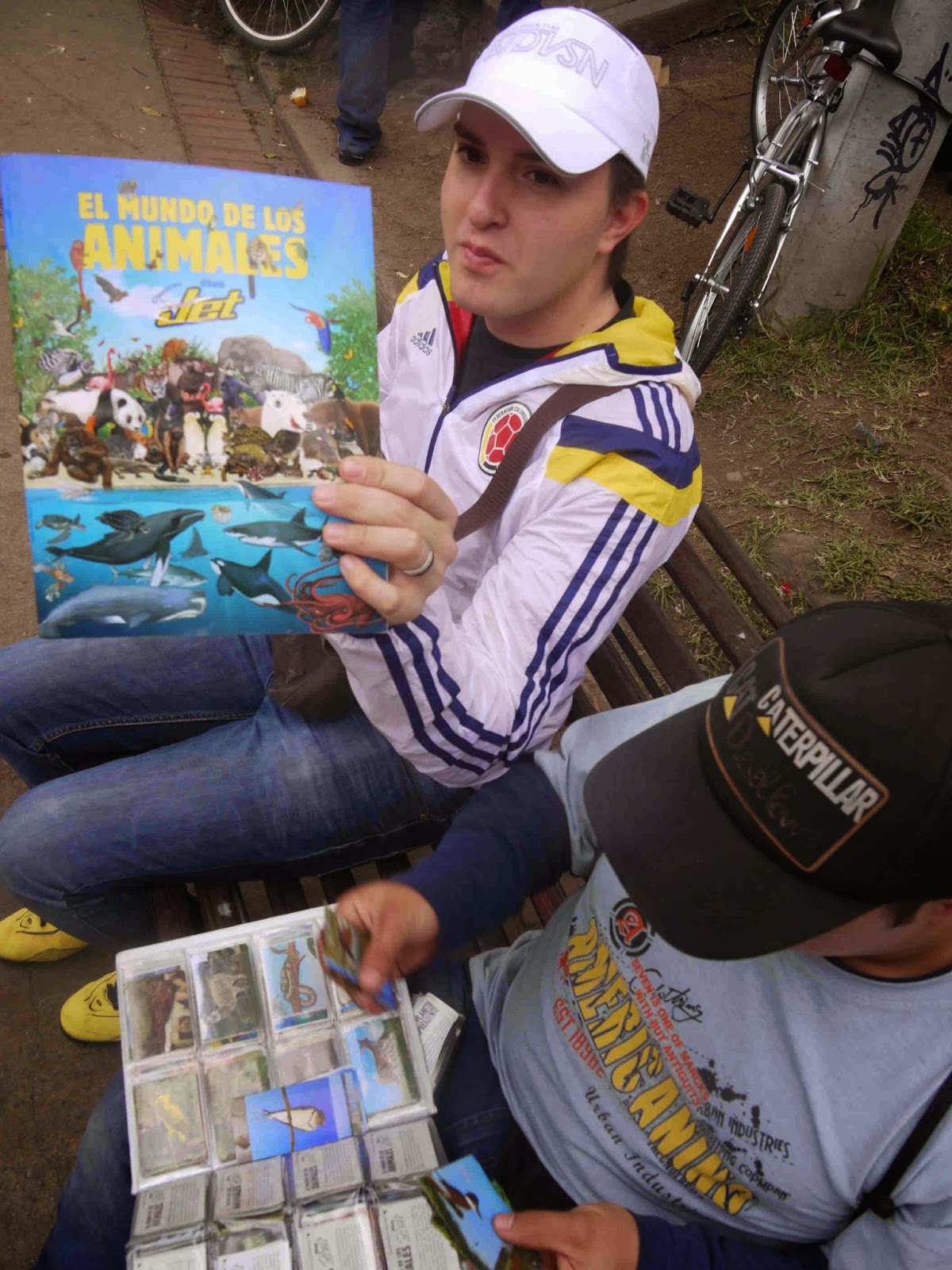 I came upon this quirky Bogotá subculture in the Parque Nacional today. At first, I thot they were fans of Panini, the futbol star cards which generated a craze during the World Cup. But the Panini season passed with the Cup, and these cards' images were rather different: colorful animals, dinosaurs, plants and interstellar bodies.

These, in turned out, are the stickers wrapped around those little Jet candy bars. This particular passion's a bit quirky, perhaps, especially for adults. But it's no worse or weirder than collecting coins, stamps or old books, and lots cheaper and more colorful.

Why spend one's time collecting useless things? Why not? It's more active than television, and better for your health than drinking. Not only that, but it's cheaper and more pleasant for the palette than collecting old cars. And you've got an excuse to buy little chocolates.

"That's why we're all a little bit fat," one collector, Juan, told me.

A sentiment which certainly gratifies the Jet chocolate company.

While nobody gets rich collecting Jet stickers, there is a bit of money in it. I see on an Internet commerce site that a full album from decades past can be worth as much as 220,000 pesos, almost US$100.00 - at least in the seller's eyes. 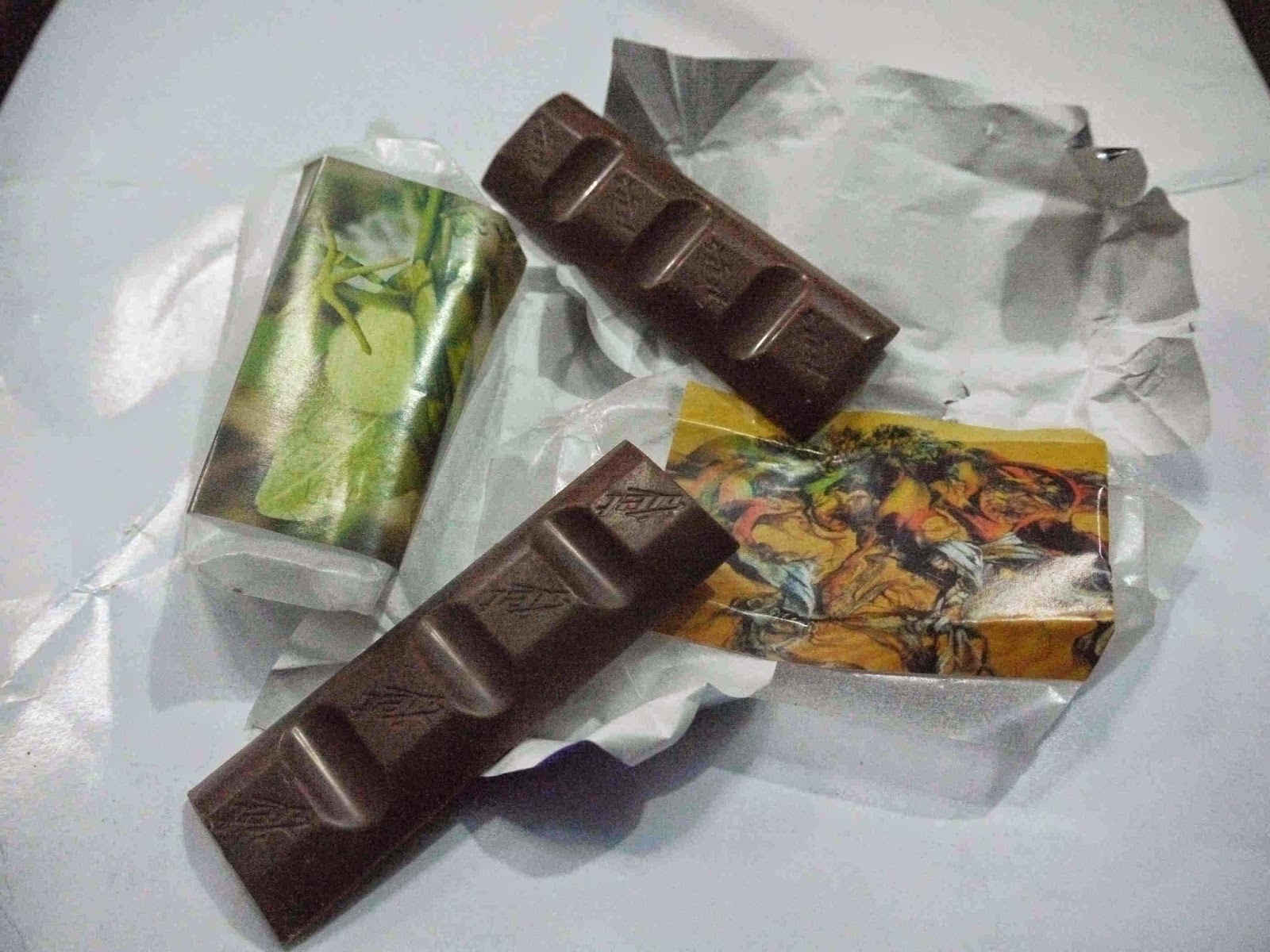 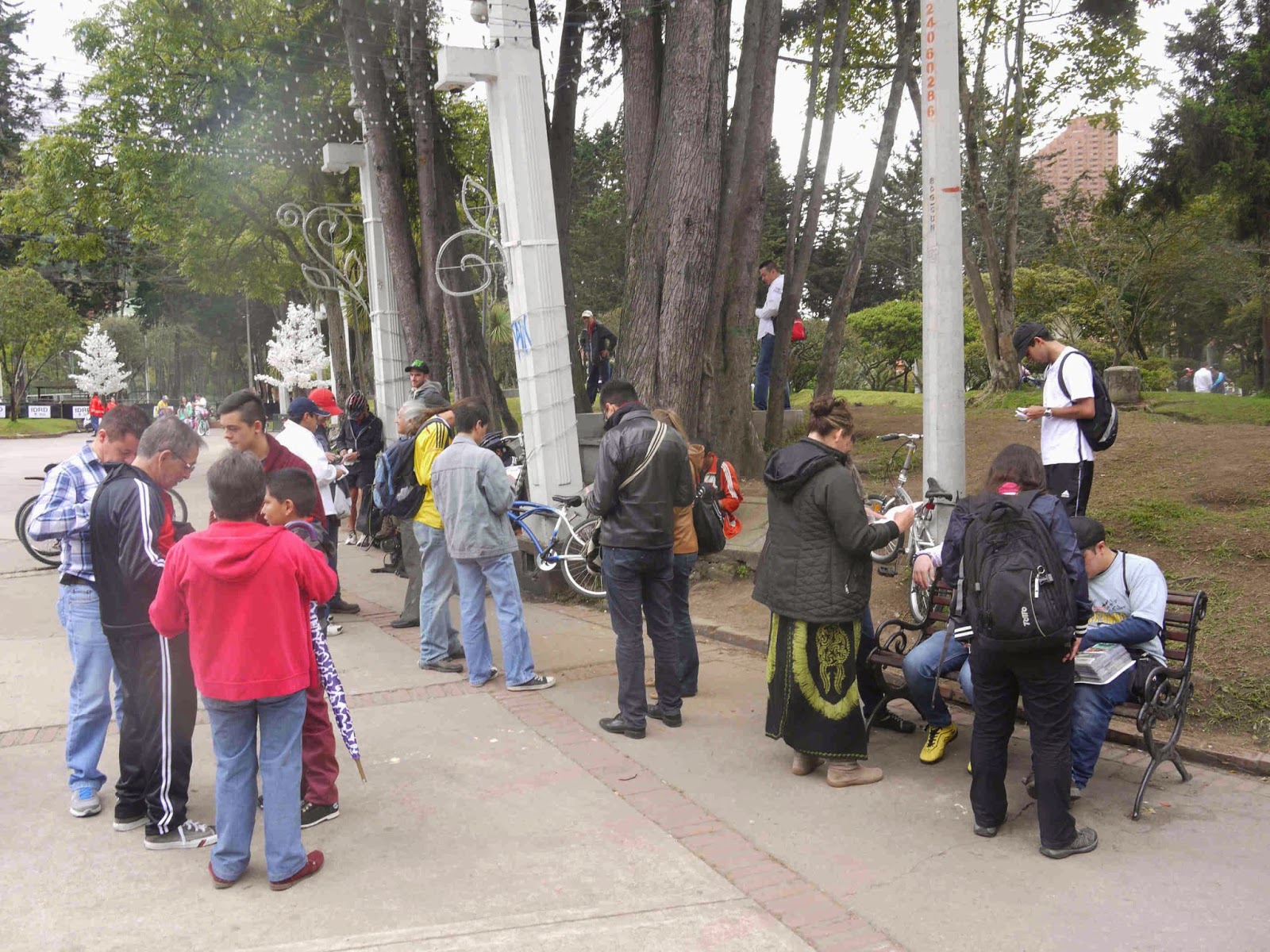 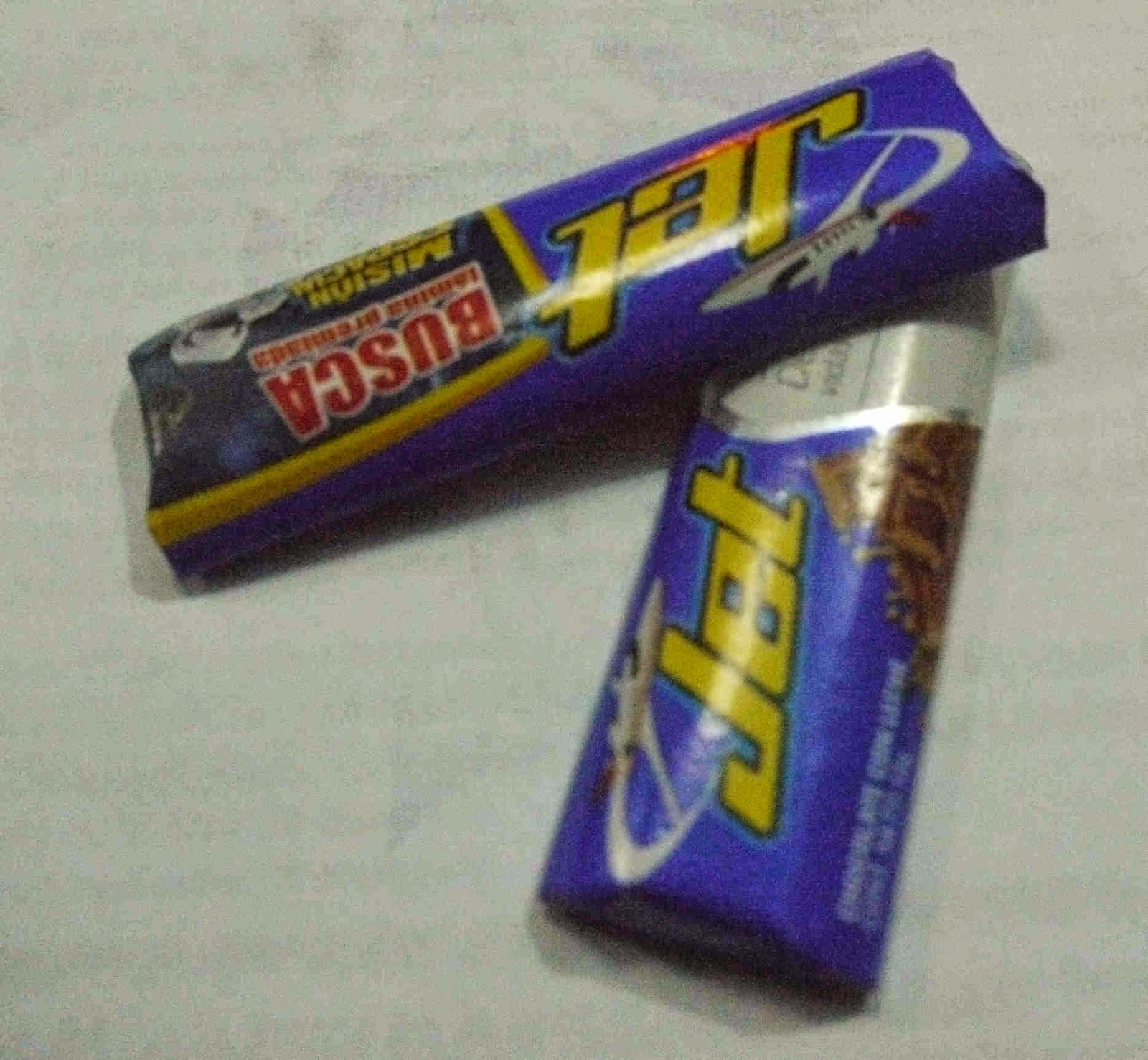 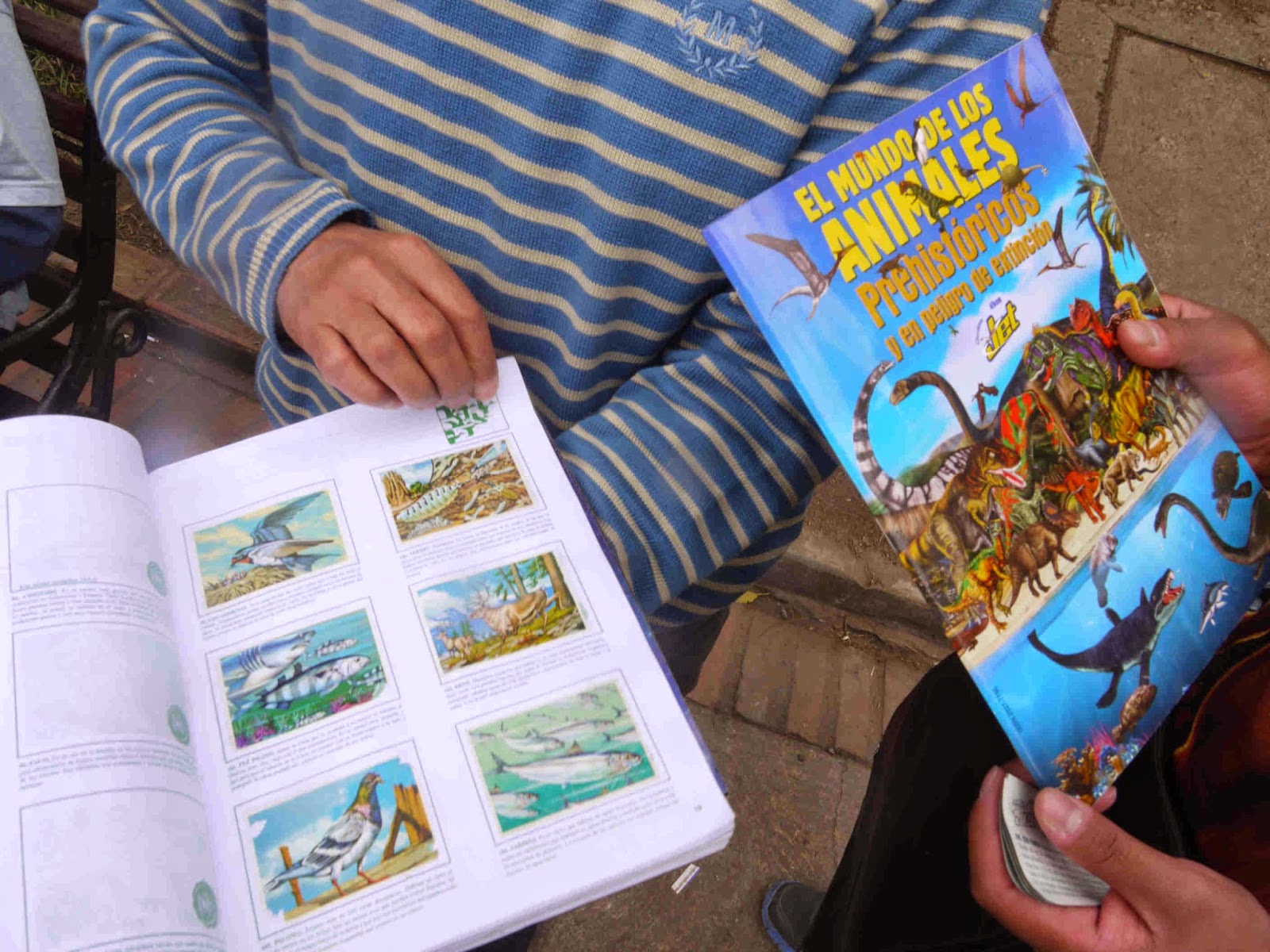 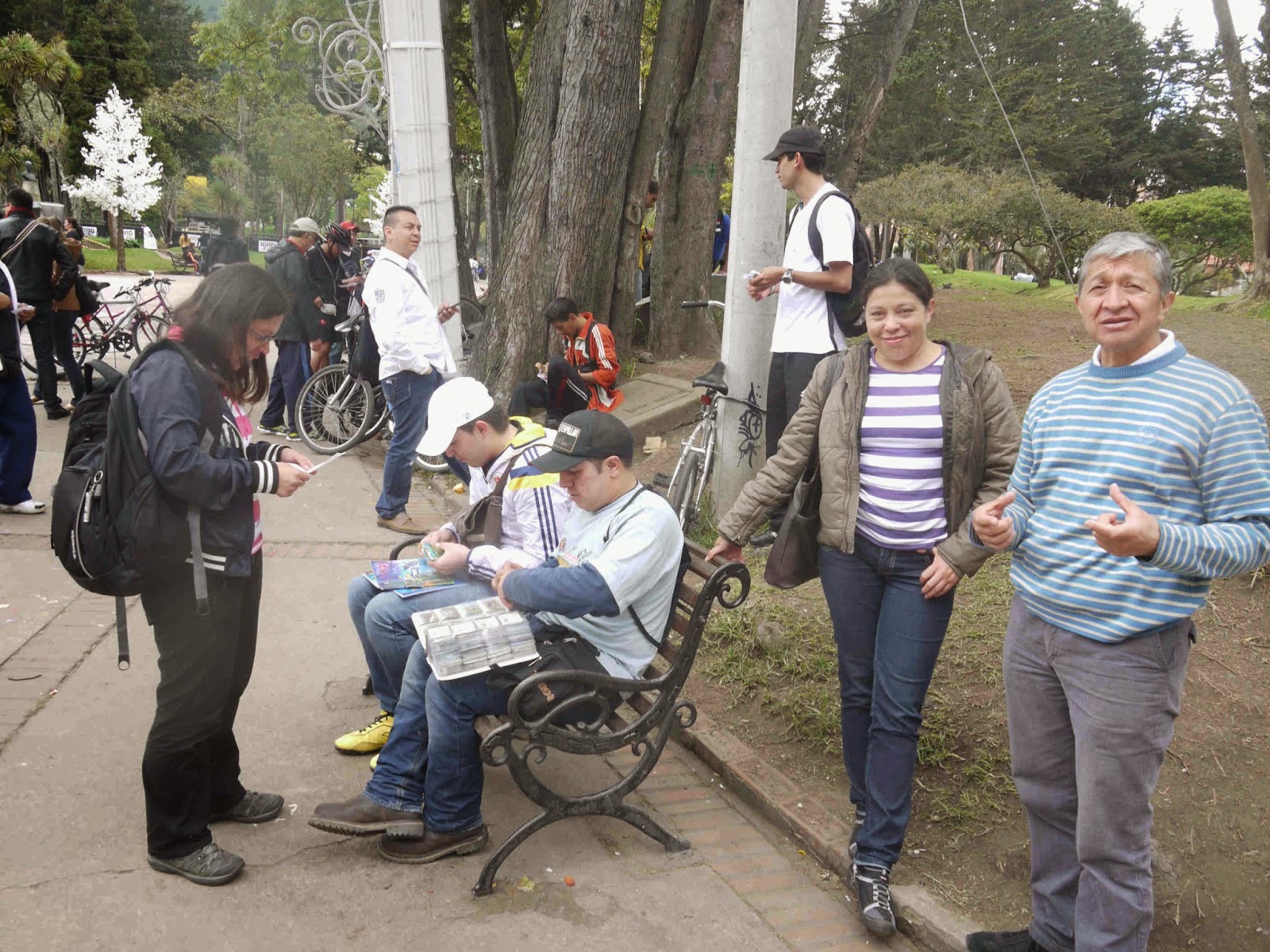 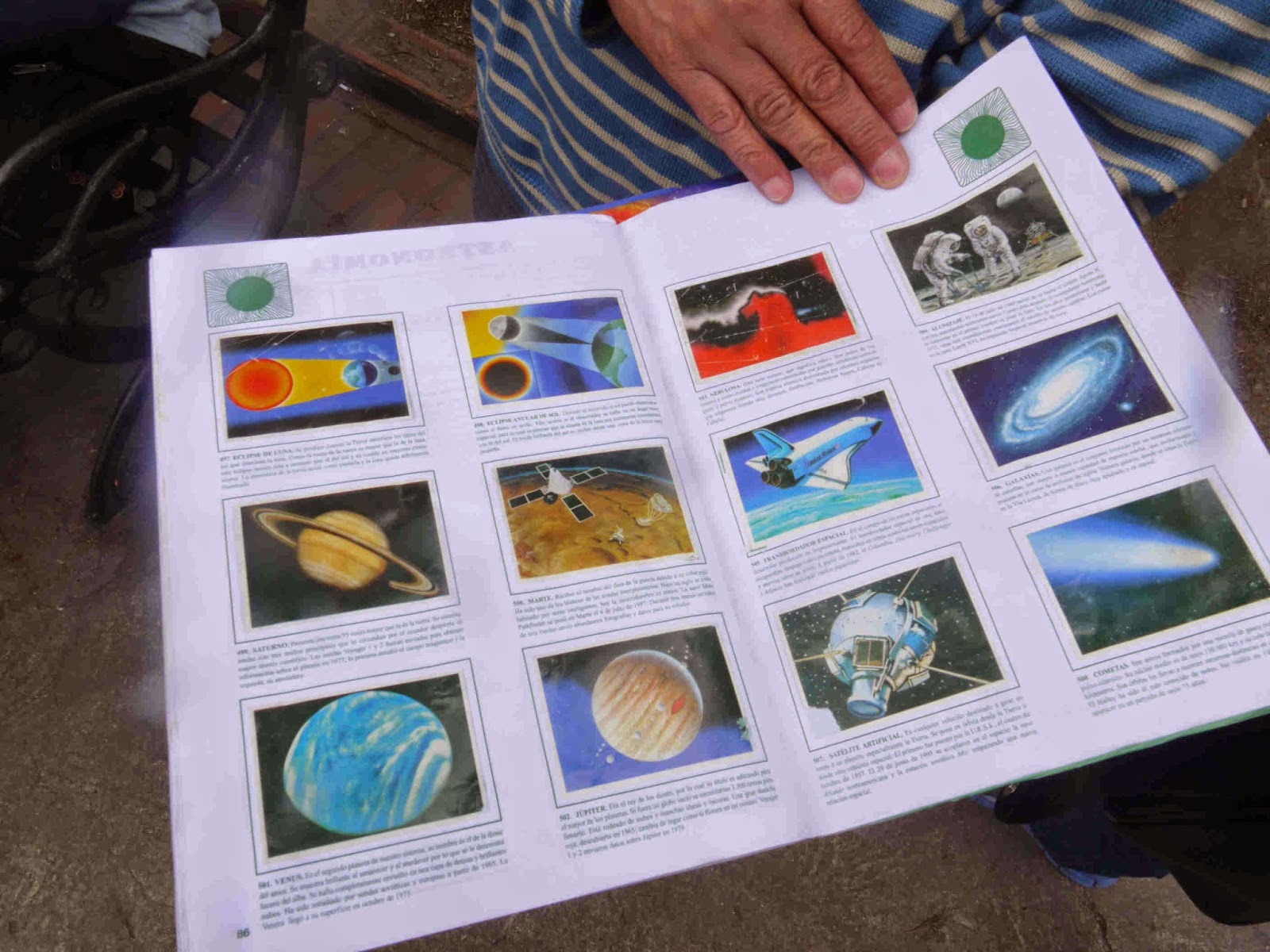 Ambassadors are supposed to defend the rights and dignity of their country and its citizens. And, presumably, they should defend values such as presuming the innocence of their nations' citizens.

So, why is Luis Eladio Pérez, Colombia's ambassador in Caracas, going to resign Dec. 31?

The answer stems from the Oct. 1 murders of Venezuelan parliamentarian Robert Serra and his female assistant, mysteriously killed in Serra's house on the night of Oct. 1.

In today's intensely politicized and polarized Venezuela, the murder of a pro-government member of the National Assembly could not be chalked up to robbery or, perhaps, a love triangle. No: It had to be a political conspiracy, and behind it that arch-enemy of the Venezuelan 'revolution': Colombia's political right.

With Venezuela's economic train wreck only getting worse, its government wants desperately to put the blame elsewhere - and Colombia is a convenient target. Perhaps for the same reason, dozens of Colombians have been arrested in Venezuela for seemingly trivial or apparently trumped-up charges including contraband for buying subsidized products for home use.

Since then, Venezuelan authorities have arrested at least ten people for the murders. But in Venezuela, where the police and court system seem to be political instruments, it's hard to judge why they were rounded up.

Maduro also accused a man named Leiva Padilla Mendoza, conveniently nicknamed 'El Colombia', of commanding the band that committed the murder. Padilla was arrested Nov. 2 in Colombia. He denies participating in the killings and says that he is Venezuelan and supports the Venezuelan government.

For his part, Ambassador Pérez said that Mendoza was a Venezuelan citizen born in Venezuela of Colombian parents. And Pérez questioned whether there was evidence of a link between Colombian paramilitaries and the murders.

The result? Ambassador Pérez resigns, altho it's clear he was pushed. He will be replaced by Colombia's current ambassador to Ecuador, who presumably is used to watching what he says around authoritarian leftist governments.

Ambassadors are supposed to defend the interests of their nations and citizens, which is exactly what Pérez appears to have done. But Pérez's openness to truth rather than ideology made Venezuelan officials uncomfortable, prompting the Colombian government to ask him to resign.

It's a sad day when Colombia yanks a man who was doing his job right in order to truckle before authoritarian Venezuela's twisted version of reality.

A Less and Less Catholic Colombia

Christmas is still a huge deal here in Colombia - but, according to a recent survey, it's no longer such a Catholic one.

According to the survey, by the Washington D.C.-based Pew Research Center, Colombia is still one of the region's most Catholic countries, with 79% of the population identifying themselves as Catholic. Paraguay, at 89%, was the most Catholic, and Uruguay, at 42%, the least.

But Colombian Catholics appear to be leaving the religion at the fastest rate. It is the nation with the largest proportion of non-Catholics who were raised as Catholics.

The fastest-growing evangelical churches are Pentecostals, who tend to be fundamentalists who believe in a literal interpretation of the Bible. As a result, the retreat of the generally conservative Catholic Church could mean that many people are becoming even more conservative in their values.

'As Catholics become more liberal on such questions (as gay rights and abortion), that points to looming American-style “culture wars”,' predicts an article in The Economist.

The Catholic Church could be losing adherents for various reasons, including scandals and a decreasing number of priests. (But while the Catholic Church has had headline-making scandals, Colombian evangelicals have as well.) In contrast to Catholicism, in many evangelical churches, almost anybody can become a minister, and celibacy is not required. As a result, Protestant churches can evangelize more actively and create a more personal relationship with members.

Protestant churches can be “family-like,” David Stoll, an anthropology professor at Middlebury College in Vermont, told The Economist.

The Pew study found a strong correlation between migration and conversion to Protestantism, probably because of the availability of Protestant ministers available to evangelize them. The evangelical churches are also growing most strongly amongst the poor.

The Catholic Church's slide in the region comes despite the popularity of Pope Francis, the church's first pope from Latin America.

Colombia has been officially secular since it created a new Constitution in 1991. However, its precise relationship to Catholicism is still being defined. Secular organizations recently protested the creation of a commemoration day for Madre Laura, a Catholic nun who evangelized indigenous people and in May of this year became Colombia's first Catholic saint. While a high court ruled in favor of creating a holiday honoring the Madre Laura, it stopped short of making her the patron saint of Colombia's teachers. 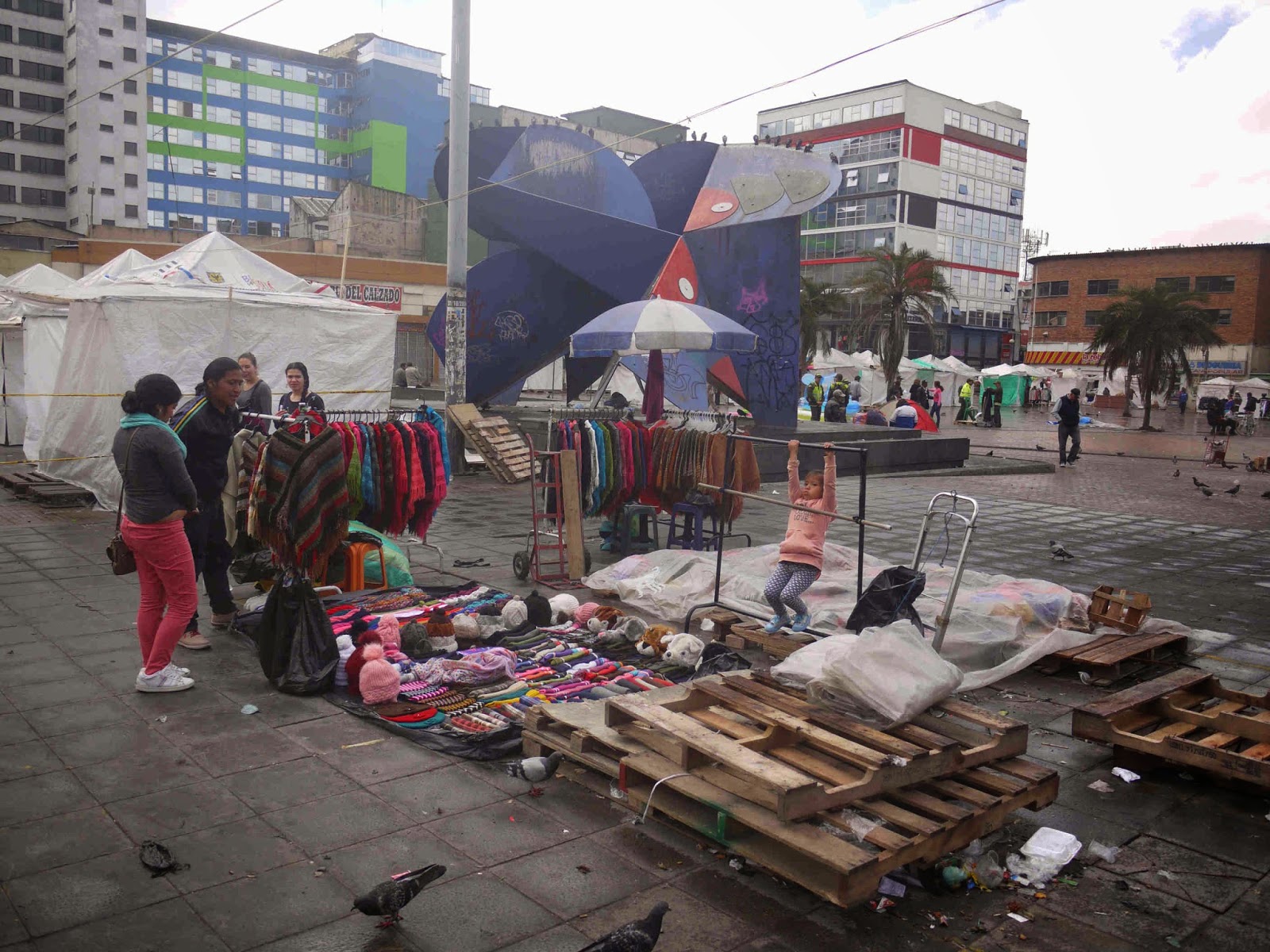 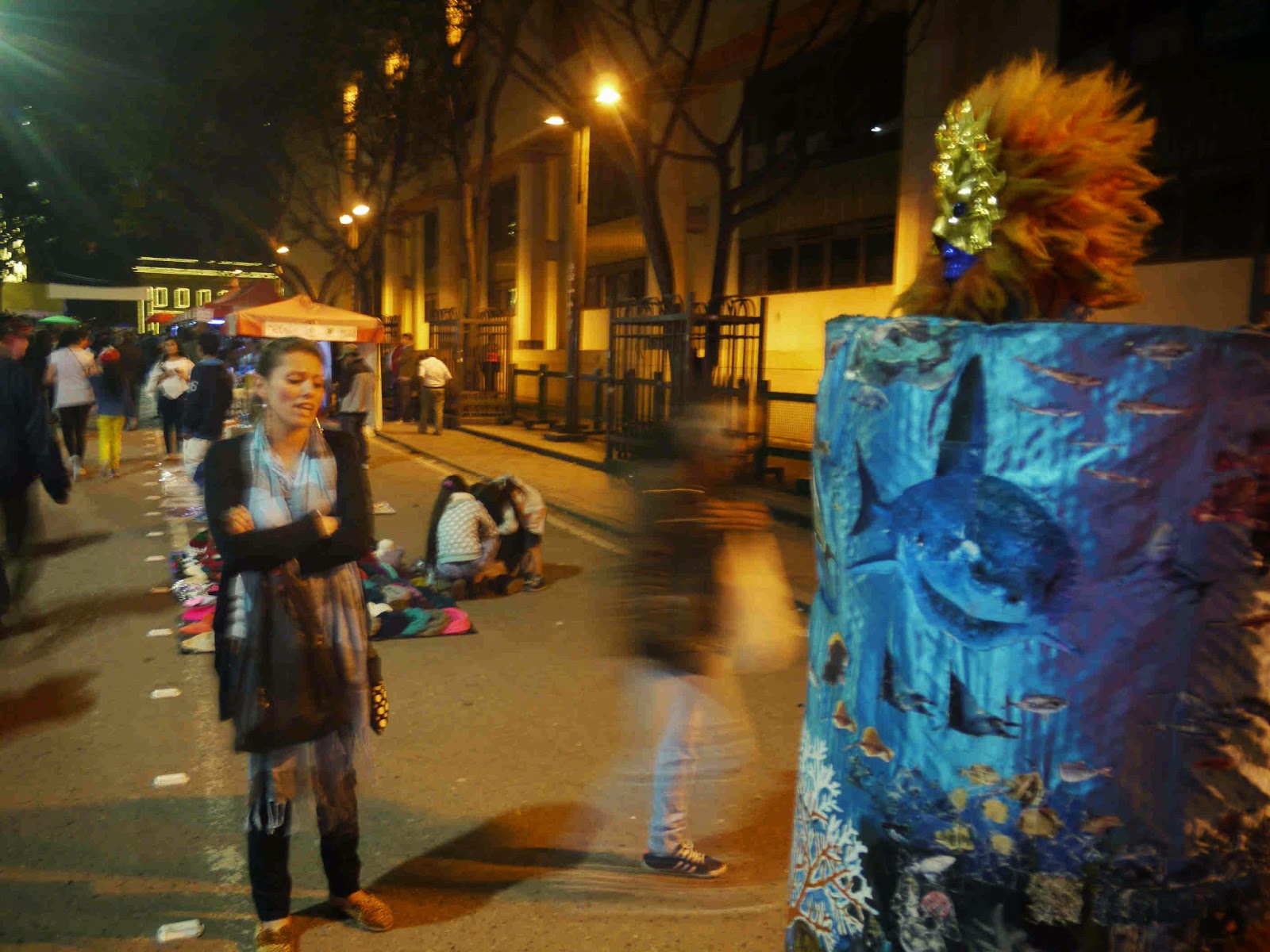 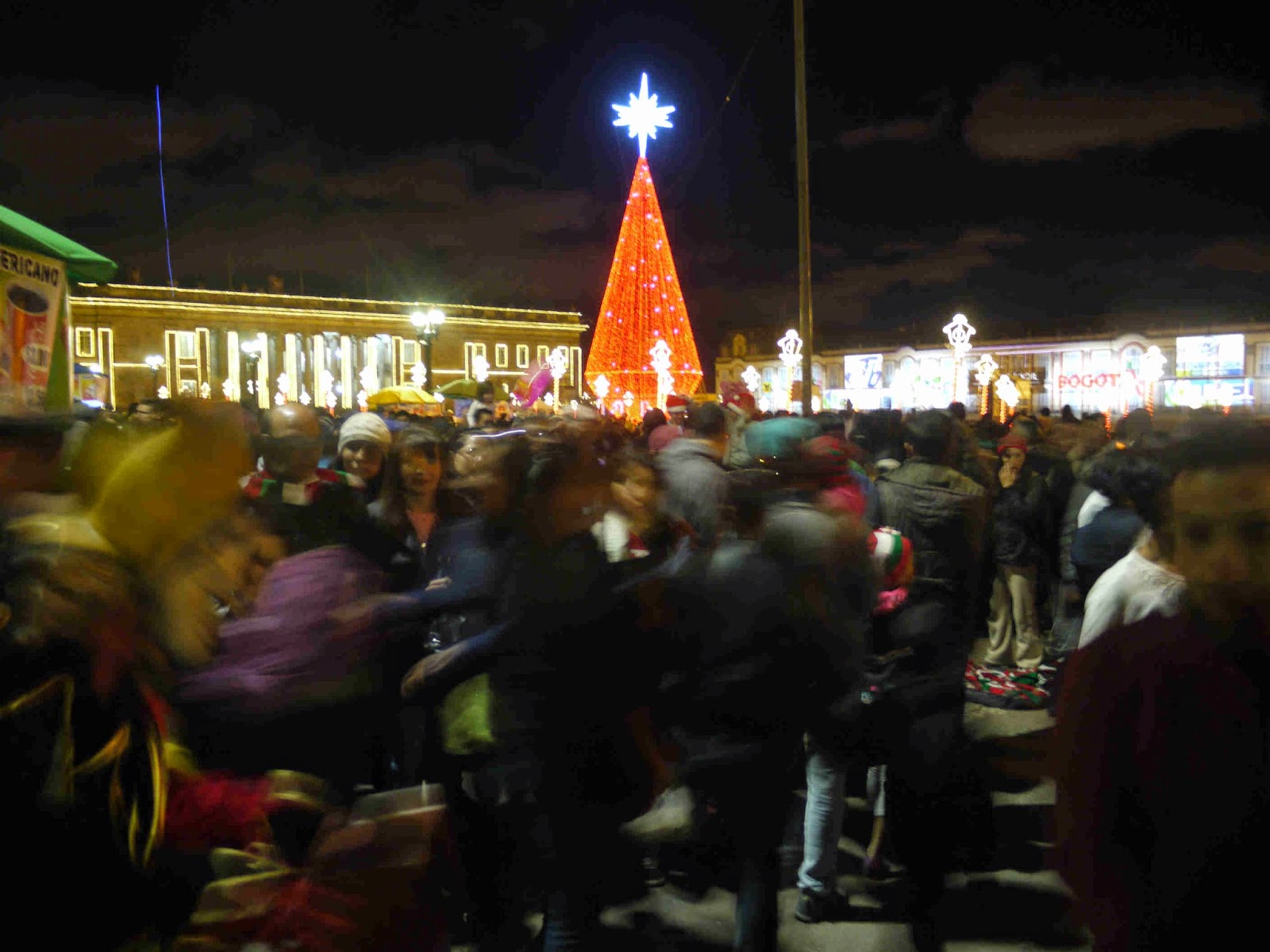 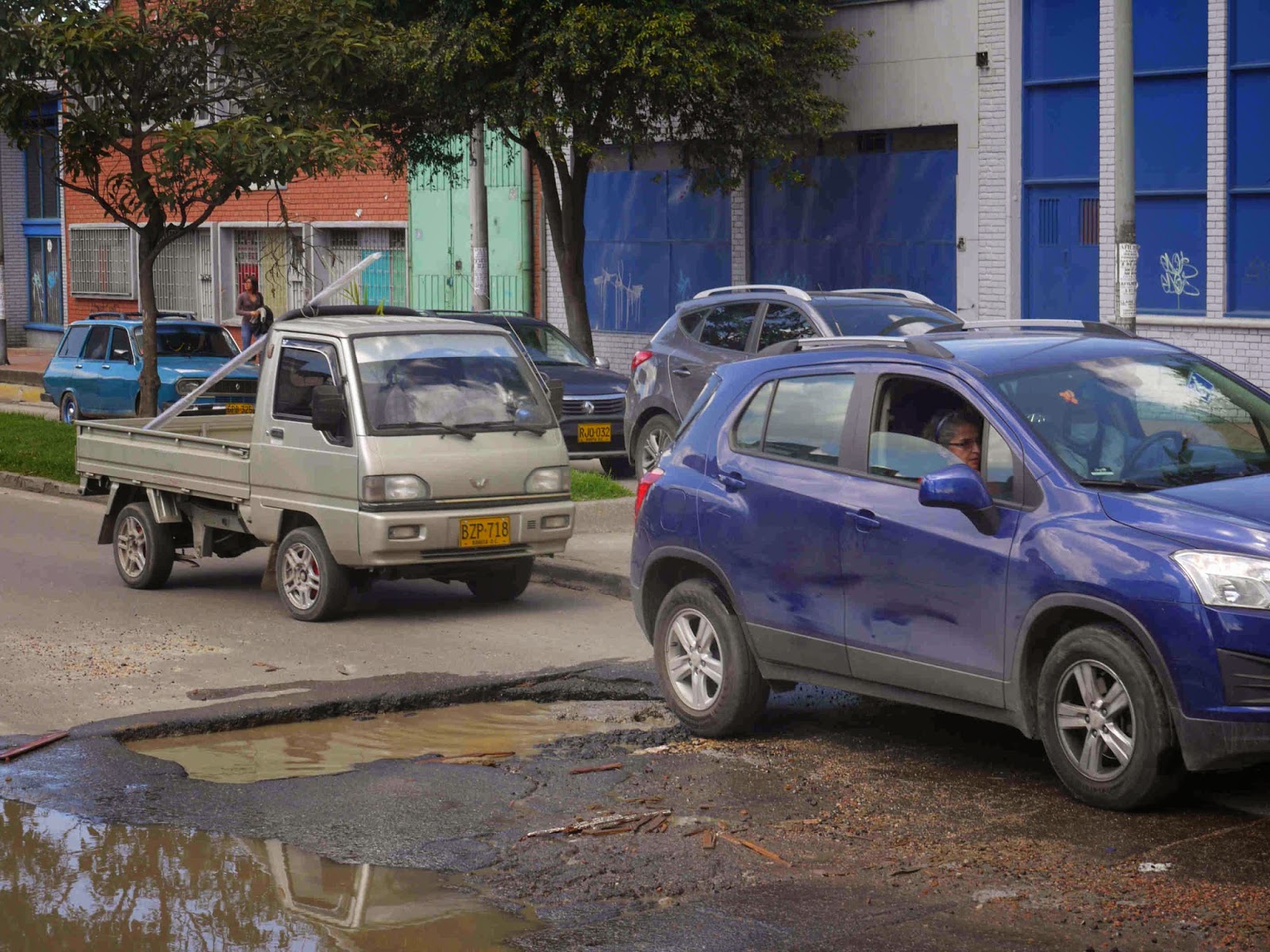 Central Bogotá's streets have become urban obstacle courses. And things will only get worse, since El Tiempo reports that money for road repair will be cut by more than 50% in next year's city budget.
But it may not matter, since the Petro administration doesn't seem to be able to get anything done on any front.
Some bogotanos blame the city's traffic jams on bad roads. But one might also put the blame for the bad roads on the traffic.

Bogotá now wants to build a multi-billion dollar subway line - even tho nobody can say how the city will pay for it. Does it make any sense at all that a city which can't scrape together the money to pave its streets could finance a mega-project like a subway?
By Mike Ceaser, of Bogotá Bike Tours
Publicado por Miguel en 8:22 PM No comments: