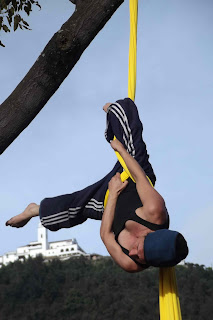 This afternoon, I encountered these guys practicing acrobatics on La Plaza del Periodista in La Candelaria. With Monserrate and the rest of the city's Eastern Hills and as a background, it created a great scene.

Right now two theatre festivals are going on in Bogotá, with lots of activity in La Candelaria. 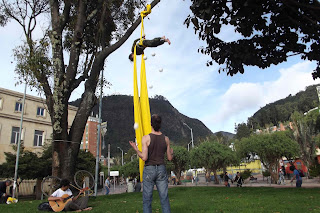 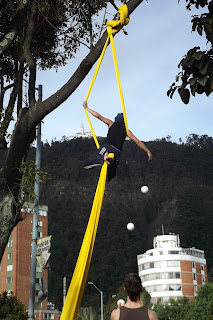 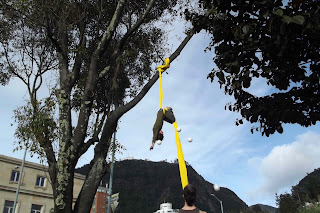 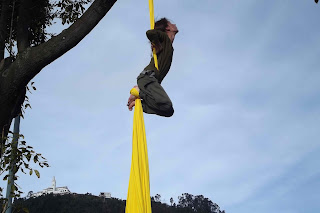 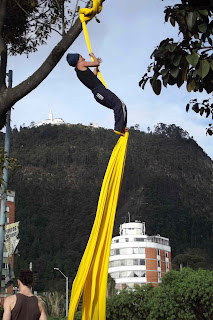 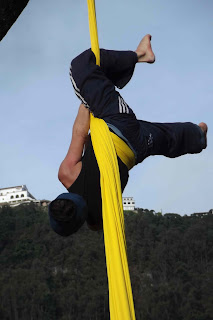 Seventh Ave. is chaotic, polluted and congested. It functions poorly and is an embarrasment for Bogotá - After all, this is the city's most emblematic and historical avenue, passing by Plaza Bolivar, the presidential palace, various parks, museums and the bullfighting plaza.

Mayoral administrations have cycled thru plans for a subway, a full TransMilenio line, Samuel Moreno's idea for a 'TransMilenio Light' because of the avenue's narrowness and now light rail.

Petro's light rail line would extend from the 20 de Julio neighborhood in the south up to near 200th St. in north Bogotá.

In terms of simple economics and rapidity of construction, some sort of TransMilenio line - with all its problems - is probably the best solution. A TransMilenio line can carry about as many passengers as light rail, is faster to build and has the added benefit of merging into the existing TransMilenio network, eliminating the need for transferring between modes.

A light rail line costs somewhat more than TransMilenio to build, but would have lower maintenance costs. Light rail also doesn't pollute the air. Light rail would also have the advantages of adding a panache and a sophistication to central Bogotá, which would give a boost to the city's image.

Any sort of rail also has the important advantage of attracting many more of the high-income riders who feel that getting on a bus is beneath them. This is particularly important for Seventh Ave. with its wealthy neighborhoods and expensive hotels nearby.

Light rail also has the advantage of being lots faster to build than a subway - a key factor for Petro, who believes that he could get the line done during his mayorship. (And then maybe run for president on the accomplishment.)

But Bogotá has done no studies for light rail, meaning that it would have to start at square one. And, a light rail line would require passengers to get off and wait and then transfer to a subway or a bus.

Finally, a subway line could carry many more passengers than the alternatives, but would take far longer to build - most likely decades - cost lots more and mean lots more urban trauma during construction. Also, an underground subway would do little to improve the chaos and traffic jams on Seventh Ave.

Finally, concentrating on a subway would guarantee Bogotá another decade or so without major transit improvements, since that's how long subways typically take to build.

Any change on Seventh Ave. would be an improvement. As a desperate-sounding community leader in the Usaquen neighborhood told El Tiempo: 'We've been waiting for years for a solution, and have seen all kinds of alternatives. We're willing to pay - just as long as they actually finally build something!' Comparing the space required by people in private cars and a light rail car (or a bus). More private cars will strangle Bogotá! 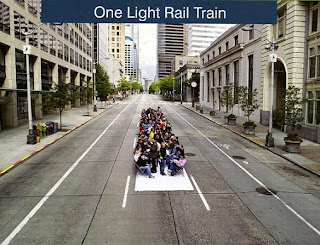 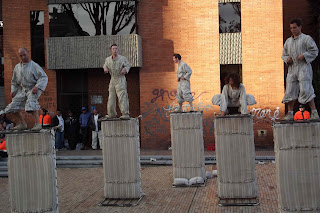 The French theatre troupe Tango Sumo performed this abstract play, called Expédition Paddock, on the Plaza del Periodista this afternoon. One of the actors, Denis, told me the play was a sort of allegory about prison and a psychiatric ward.

But Denis said the purpose wasn't to be just negative.

The play was part of the two theatre festivals going on right now in Bogotá. 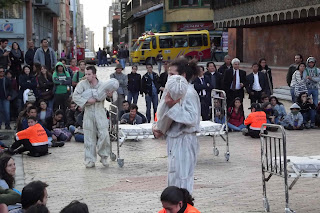 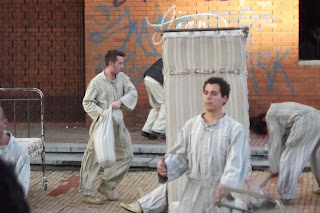 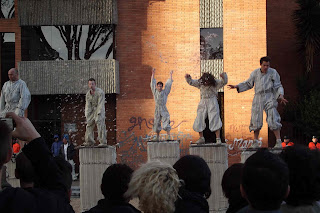 As soon as the play ended, this guy appeared on the Plaza del Periodista and performed with fire. 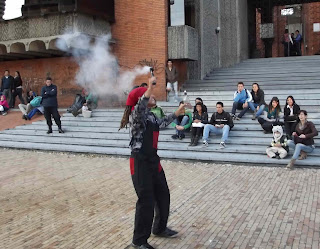 A judge in Antioquia has decided to drop an investigation against executives of the Chiquita banana company, concluding that the millions of dollars the company paid to Colombia's leftist guerrillas and later to paramilitary groups were extortion, not voluntary protection payments.

The distinction is fundamental for the lawsuits and other cases the company faces: Did Chiquita pay off these violent groups voluntarily, to gain benefits, or because it feared attacks and felt it had no choice.

Some beg to differ. A Bogotá court has ordered that Chiquita's Colombia properties be used to pay off the paramilitaries' victims (a mostly symbolic move, since the company sold its plantations in 2004). And Colombian high officials have expressed a desire to extradite Chiquita's executives, altho Colombia apparently never filed such a request. (Probably, Colombian officials realized that such a futile request would only show Colombia's toothlessness. Chiquita, an emblematic U.S. company, is well-connected in Washington: U.S. Attorney General Eric Holder was Chiquita's attorney.) The company also faces lawsuits in the U.S. by families of alleged victims of paramilitary groups which received money from Chiquita.

Chiquita can also point out that it came forward and voluntarily told U.S. officials about the payments, and paid a $25 million fine to the U.S. government for financing terrorists. Undoubtedly, Chiquita was only one of many companies which made such payments, and likely still pay off violent outlaw groups in Colombia. Chiquita can also point out that the Colombian military supposedly even encouraged Chiquita to make the payments.

While Chiquita undoubtedly faced threats, and likely could not have done business in Colombia without paying off the outlaw organizations which controlled the area around their banana plantations. But it's also likely that Chiquita had more in mind than just protecting its workers, as the company claims. After all, Chiquita is also in the business of making money - lots of it. The company could have stopped making these payments at any time by selling its plantations and pulling out of Colombia. Instead, it stayed and continuing doing business until 2004. Imprisoned paramilitary leaders have also reportedly said that they imported weapons using Chiquita's port.

It's difficult to understand how any company could make payments to an organization which is at the same time terrorizing civilians and claim it was an ethical, moral decision. Just imagine if the case had instead happened in the U.S., and a company had for years paid off a terrorist group which was murdering civilians and driving them out of their homes. Would any justificiation have been conceivable? 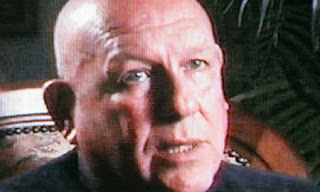 Yair Klein, the Israeli mercenary who trained Colombian paramilitaries during the 1980s and '90s, is talking to Colombian journalists in Israel, where he's at a safe distance from a ten-year prison sentence given him by a Colombian court.

Klein claims that his activities - training outlaw paramilitary groups - were approved of by the Colombian government and also the United States Central Intelligence Agency. Klein made his statements in the book 'The Klein Case: The Origins of Paramiltarism' (El Caso Klein: El origen del paramilitarismo), by Colombian journalists Olga Behar and her daughter Carolina Ardilla.

Of course, Klein has a strong self-interest in making these claims, which would give a veneer of legality to his actions - altho they don't change the fact that the groups he trained committed horrific human rights violations, including chainsaw massacres.

Still, Klein is believable. For many years, it was an open secret that Colombia's military collaborated with right-wing paramilitaries and let them do the military's dirty work.

But Klein's excuse that he believed he was training people for no more than innocent self-defense against guerrillas sound like the worst sort of self-deception - at best. After all, during his years in Colombia violence by left- and right-wing organizations, as well as narcotrafficking groups, was widespread. And his comments also contain a chilling historical echo. After all, Klein's own nation Israel was founded to a large degree by survivors of the Holocaust - a crime committed in many cases by men and women who claimed they were just following orders or didn't know the consequences of their actions.

With its bars, theatres and artsy shops, La Candelaria has to be Bogotá's grooviest and most Bohemian neighborhood.

And that's thanks to places like Nativo, a handicrafts shop opened last month by Katalina and William, a young Colombia couple.

Nativo sells handicrafts, many made by indigenous Colombians - the house in which the shop is located has long been used as a temporary residence by indigenous people from the Santa Marta Mountains while visiting Bogotá. The shop also sells lots of paraphenalia, useful certainly for lots of legal substances, but also a certain illegal leaf. If the personal dosis drug law returns, as appears likely, this shop will get a boost. 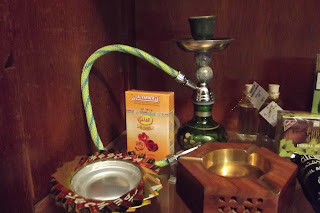 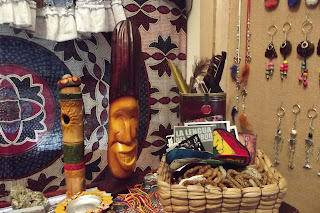 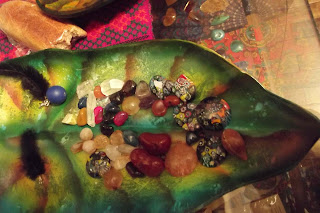 Bogotá's rainy season has arrived. But today we had not only rain but the heaviest hailstorm I've seen during my six years here. During a bike tour, it trapped us in the Central Cemetery, which fortunately has a roofed entranceway, albeit a small one.

The hail quickly painted the cemetery white, as tho dusted by a snow which never falls here. Then the precipitation turned to rain and washed it all away. 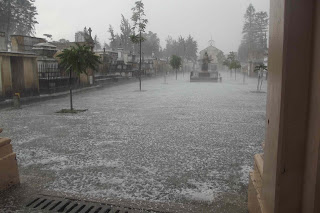 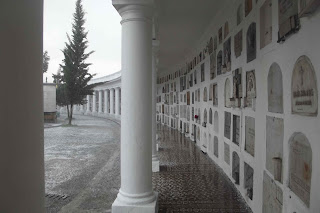 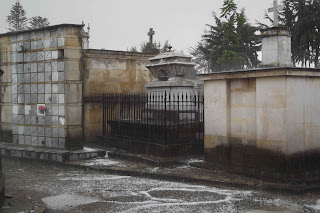