Back to the Central Cemetery

In tribute to Halloween, some pictures of Bogotá's Central Cemetery, which I visited a few days ago, after staying away for years. That's because the cemetery, located beside the Santa Fe neighborhood and near the red light district, has a reputation for muggings, drug taking and even shoot-outs.

Nevertheless, the new do-not-enter policy also took away a lot of the cemetery's life and local color: No line of believers at Bavaria brewery founder Siegfried Kopp's tomb, waiting to give the man flowers and ask him for supernatural favors. No transvestites noting their lottery numbers on Salomé's headstone. No followers rubbing 20,000 peso bills on Garavito's tomb. Nobody scattering seed to the pigeons.

But if the cemetery has lost a lot of its old atmosphere, it's still an exhibition of Colombian history and politics. 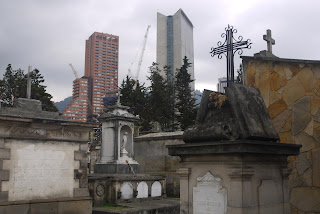 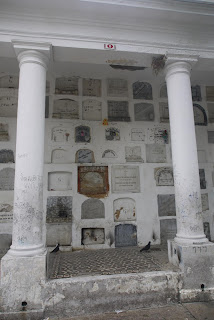 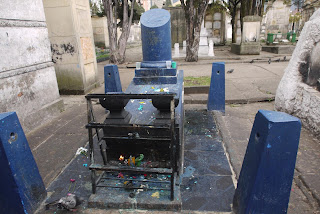 But, like Elvis and those Little Green Men, Hitler stories appear everywhere, because they sell.

In this case, one of the CIA documents released a few days ago in the Kennedy papers
declassification, was a second-hand story from an old Nazi alleging that Hitler had escaped the collapsing Third Reich and taken refuge in Tunja, Colombia in 1954. It was accompanied by a photo showing two seated men, one of them sporting a Hitler toothbrush moustache.

And Abel Basti, an Argentinean journalist, is to publish a book claiming that Hitler visited Boyaca before continuing on to Argentina.

Hitler's suicide in a Berlin bunker in 1945 as the Soviets overran the devastated city is well documented by many witnesses. But, just imagine for a minute that a megalomaniac war criminal like Hitler HAD escaped to South America. Is it conceivable that he could have kept quiet? Of course not. And Nazi hunters would have followed his trail, and most likely captured him, as they did Adolf Eichmann and others.

The CIA document does not prove that Hitler lived in Colombia, but rather that people like to tell Hitler stories.

El Tiempo has reported the controversy over a proposed law to reduce the penalty for having a plantation of less than 3.8 hectares of coca leaf, the base ingredient for cocaine, to only 4 years in prison.

It's polemical in particular because sentences of less than four years can be served outside of prison. Since the great majority of family coca plots measure less than 3.8 hectares, this new legislation would in practice make coca growing a non-prison crime.

Of course, in practical terms it's been this way for a long time. Logistically, in terms of prison space and for the sake of rural peace, Colombia could not possibly imprison the more than 100,000 families which survive by cultivating coca leaf.

But there are also economic and legal reasons why decriminalizing coca leaf cultivation is a good idea - no matter what the Trump White House says.

First of all, erradicating coca leaf is futile. The United States has poured well over $10  billion into Colombia, in great part to combat the illegal drug trade. What does Colombia now have? Very possibly a record coca leaf harvest this year!

At the same time, removing a coca-planting family from the business only reduces demand and raises prices enough to make it worthwhile for someone somewhere else to start planting coca leaf.

But there's a third reason: Reducing coca acreage makes little difference in the drug war, because cultivation is clearly not the limiting factor for cocaine production. We know this because most of cocaine's final cost is paying for the danger of producing and transporting it. And campesino coca leaf farmer earns only a tine fraction of cocaine's street price. The tough, and expensive, part of cocaine production is transporting the stuff across international borders and distributing it on U.S. streets.

Even if ALL  of Colombia's surface area were planted with coca leaf, it would make little difference in the drug trade.

Gathering of the Zombie Marchers

Halloween's a big deal here, and this group was gathering today for the Zombie March to Plaza Bolivar (which quickly turned cold and soggy) below the Plaza de Toros, beside El Parque de la Independencia. 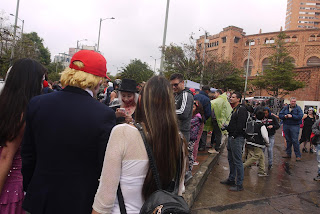 San Juan de Dios Hospital, on Calle 1 and Carrera 10 in south-central Bogotá, holds a legendary status in Colombia's medical history. Its roots reach back to the 16th century, and some of the country's most accomplished doctors did their internships there.

But, amid financial problems, the hospital was shut down in 2001. Since then, it has been the center of controversy, as citizens groups and some politicians called for its reopening, laid-off employees lived in its buildings, demanding back pay, and its structures deteriorated. 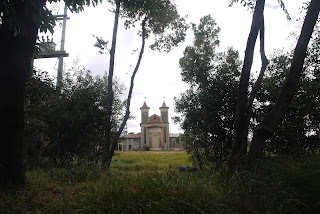 Mayor Gustavo Petro supported the hospital's renovation and reopening - despite the huge cost - but did nothing. Under Mayor Peñalosa, two small sections of the hospital have been turned into emergency medical centers for ambulatory patients.

Meanwhile, the rest of the buildings continue deteriorating, and the trees keep growing, turning the hospital grounds into a kind of urban forest interspersed with decaying buildings, very possibly haunted.

San Juan de Dios's long limbo is nothing but a tragedy for Bogotá: for sick patients who suffer thru long waits for treatments, and for the hospital's neighbors, for whom its campus could provide much-needed green space - if only visitors were allowed in.

Perhaps - but probably not - you saw this brief article in El Tiempo recently: 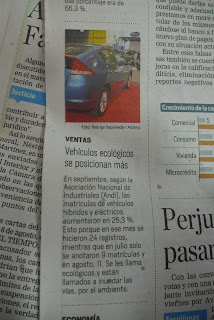 Under the headline 'Ecological Vehicles Improve their Position,' the article boasts that the registration of electric and hybrid vehicles shot up in September by 26.3%. The writer doesn't seem to know basic math, since the previous months fewer than half such vehicles were registered, meaning that September actually saw a registration leap of way over 200%.

Potential relief for our lungs from Bogotá's polluted air? Don't be so hopeful.

Translated into absolute numbers, in September only 24 'green' vehicles were registered, and 9 and 11 in July and August. Those numbers are so measly as to be insignificant.

After all, in the first half of October, 7,260 new vehicles were registered in Colombia, a number which the national retailers federation, Fenalco, called 'disappointing.'

At that rate, in a good month for 'ecological' vehicles and a 'bad' one for sales of conventional, smog-belching ones, the so-called 'green' vehicles accounted for only a little more than one tenth of one percent of all car sales.

(It's also worth recalling that, depending on the materials used to build them, particularly the battery, electrical vehicles can produce lots of environmental impact.)

Incomprehensibly, the government has even placed quotas on the number of ecological vehicles which can be imported each year, at about 5,000 annually thru 2027. I doubt they limit imports of conventional gas guzzlers. Of course, at the rate they're going, the imports will never come close to that number. E-vehicles are more expensive than conventional ones (altho less expensive to operate), environmental values here don't seem very strong, and Bogotá has few vehicle charging stations - and in fact removed some of them recently.

Colombia provides some tax and import-duty benefits for importers and buyers of electric vehicles, but they obviously are not enough. And until the government gets serious, mostly by raising the price of gasoline, don't expect any real change.

Carrera Septima, Bogotá's most iconic avenue, is often congested and chaotic - and generally an ordeal for commuters.

Proposed (and stillborn) solutions have come and gone: Dig a subway line below the avenue; Add a Transmilenio line; Build a light rail line. Convert La Septima into an 'eco-avenue.' And on and on...

Meanwhile, the avenue grows ever more chaotic and congested.

Each of the ideas had its disadvantages; A subway line would cost a fortune and generate monumental urban trauma during construction. A light rail line would cost less, but carry fewer passengers than a subway or even buses, according to some experts. And TransMilenio bus lines are cheaper to build, but more expensive to maintain, and often pump out black diesel smoke. Also,  wealthier commuters such as the residents along Ave. Septima often prefer trains to buses.

As everybody following Bogotá's news knows, the Peñalosa administration has decided on a TransMilenio line, generating protests from residents, who worry about pollution and say that the avenue is too narrow at some points.

The city, in response, vows that the Carrera 7 buses will be clean. However, we've heard that story before about both TransMilenio and the infamous Sitp buses. (Concerned neighbors should demand that only electric or natural gas-powered buses operate on Carrera 7, guaranteeing low emissions.)

Critics also say the avenue is too narrow to fit two exclusive TransMilenio lanes, stations, as well as
two lanes in each direction of normal traffic. City halls disagrees, but acknowledges it will have to purchase all or part of some 300 adjoining land parcels - which sure seems like a lot.

I still like the idea of a light rail line, which would not pollute, would have lower maintenance costs than buses and would add an elegance to the historic avenue.

Yet, even if the TransMilenio solution is not the ideal, it would definitely be a big improvement over the existing chaos. The city needs to do something to rescue its most historic thoroughfare, whose congestion costs Bogotá commuters innumerable hours every day, and unless they break ground soon, they may never do anything.

This not-so-recent Washington Post article about the boom in Colombian coca leaf/cocaine production places the blame on Colombia for the reported big increase in U.S. cocaine consumption.

'U.S. officials say the flood of cheap Colombian product is so large that it has quietly created its own demand,' says the Post.

But many cocaine consumers are addicts, making the market somewhat inelastic. More importantly, according to Tom Wainwright, a former correspondent in Mexico for The Economist who wrote a recent book about narcotics economics called 'Narconomics: How to Run a Drug Cartel', around 2016 a ton of coca leaves that sold for $500 in Colombia retailed for $150,000 on a U.S. street.

So, virtually all of cocaine's final price comes from the trouble, expense and danger of shipping the stuff across oceans, dodging bullets, hiding it in secret compartments, bribing officials, and paying people to risk prison. The farming cost is such an insignificant proportion that even if Colombian cocalers gave their leaves away for free, it wouldn't make a noticeable difference to buyers in New York or Los Angeles.

Colombian production hasn't caused U.S. consumption to rise. Internal U.S. factors, such as a strong economy, social stresses, unemployment and others are to blame for that.

And that is why all the billions of dollars and innumerable lives expended in the war on drugs have been for almost nothing.

Colombia's immense biodiversity is going fast, in great part because many creatures' forest habitats are disappearing.

And the National University's Natural History Museum's current exhibition dramatically exhibits that with sculptures of wild animals made from sticks, pieces of bark and charred wood gathered in deforested areas.

Peace with Colombia's various outlaw organizations was supposed to strengthen protection of the environment. Instead, deforestation has accelerated the last several years, to an incredible 20,000 hectares per hour, or 178,000 hectares per year - about double the entire land area of the Dutch Antilles. According to the museum, half of Colombia's high-altitude wetlands and its foothhill forests are gone, as are 90% of its tropical forests.

With the forests, go all the species living in them.

Deforestation is driven primarily by the expansion of agriculture, both legal and illegal, including cattle ranching. Every time a new road or pipeline is cut thru forest, observers watch the deforestation radiate out from the initial line.

The museum's exhibition, called Deforested Bones, includes messages warning against consumerism. However, our unbridled consumption of natural resources is only one cause of a complex phenomenon. Other parts are poverty that makes farmers desperate to feed their families, wealth which enables landowners to corrupt government officials, and twisted government policies which routinely give natural resource extraction priority over environmental conservation.