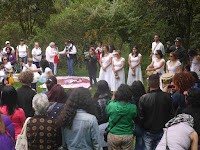 Almost exactly three years ago, Rosa Elvira Cely, a 35-year-old cafeteria employee was savagely raped and left to die in the upper part of Bogotá's Parque Nacional. Discovered unconscious by police the next morning, Cely died while awaiting treatment after being shuttled from one hospital to another.

The viciousness of the crime and senselessness of Cely's death has made the crime an emblematic one for activists against violence against women, who staged a commemorative ceremony today on the site of the crime. 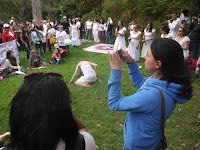 Despite publicity campaigns and stricter punishments - Cely's attacker, who was mentally ill, was sentenced to almost 50 years in prison - violence against women continues to be an epidemic in Colombia. A recent report by the Defensoria del Pueblo said there were 38 cases of such violence per day in Colombia - and those are only the cases reported and recorded publicly. Congress has two laws pending on the issue, one of which would make femicide a specific crime, and another increasing penalties for acid attacks. 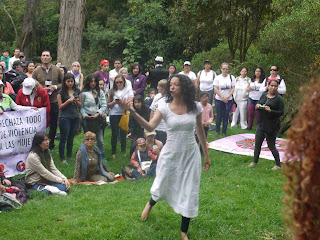 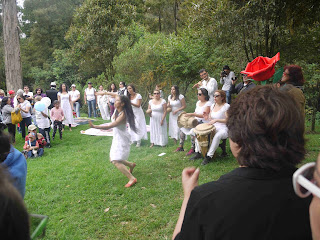 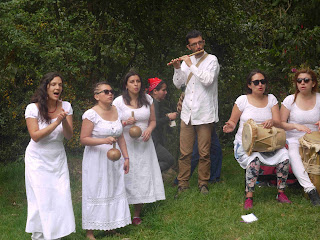 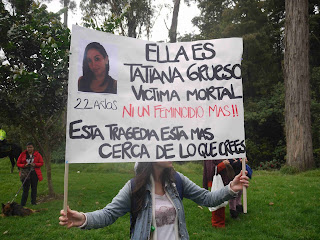 The Calibradores, a Job in Extinction?

You might have wondered what those people you see dashing thru traffic and having hurried conversations with bus drivers, notes in hand, are doing. They are calibradores, and earn a few coins by informing of how far ahead the preceding bus on the same route is running ahead of them. That enables drivers of those traditional private buses to time themselves to not follow too closely after another bus serving the same route.

It's unpleasant, dangerous work, dodging among vehicles, swallowing diesel fumes and being subjected to blaring horns. But the calibradores, many of them homeless people, have few skills or other work options. If they did, after all, they wouldn't likely be doing this in the first place.

But the calibradores may have only a few days work left, if Bogotá follows thru with its plan to integrate the traditional private buses into the publicly-run SITP bus system. Since the SITP buses run on coordinated, centrally-controlled routes, the calibradores reason for being will disappear.

Blanca, who was working Carrera 10 at its intersection with Avenida Jimenez, told me she'd been a calibrador for about four years, despite having university studies.

"I had to fight for this space," she said, against other calibradores, mostly homeless men, who also work the avenue.

Her profession "is an example of maldicia indigena," she said, using a term for native Colombian ingenuity.

She showed me the 200 peso coin which her last bus driver client gave her, and a sheet of paper where she noted the times when buses passed by. On a typical day she can earn about 20,000 pesos - less than U.S. $10.00, she said.

Blanca blames the change on 'capitalism,' and even manages to blame the United States. But the private buses are an example of unbridled, nearly unregulated capitalism. The SITP system is managed by City Hall.

And will the switch to SITP mean anything more than a change in colors? The city promoted the SITP system as a solution to, among other things, traffic congestion and pollution. But many of the SITP buses run nearly empty; and many SITP buses are themselves highly polluting.

For thousands of years, they crowned Colombian peaks: Anomalous white caps in the heart of the tropics. But, in a few decades, they will all be gone.

Colombia has about six remaining glaciers, depending on how you count them, the best known being in the Cocuy range and the Sierra Nevada de Santa Marta. In the mid-1800s, only a geological blink of an eye ago, it had about 17. Over the past 165 years, Colombia has lost almost 90% of its glacier-covered area. During the three decades between 1980 and 2010, 57% of the glaciers disappeared.

The disappearance of Colombia's glaciers, which is part of a trend also including Asia, Africa and the rest of tropical South America, does not have only environmental impacts: it is also eliminating important tourist attractions and cultural sites for indigenous peoples. For farmers, glaciers store water during the rainy season and release it slowly during dry months. Without glaciers, the rainwater rushes down quickly, carrying away topsoil and destroying the land.

The glaciers' demise is being caused by climate change. To deny that the climate is changing is to deny reality. And the overwhelming majority of scientists agree that human activity, by pumping greenhouse gases into the atmosphere, is changing the climate.

This Mine is Yours and Mine


In an industry plagued by illegality, unsafe working conditions, tax evasion and violence, the mine was intended to be a model of legality and high standards: After a group of Texas investors purchased the legendary Puerto Arturo emerald mine from emerald czar Victor Carranza in 2013, they invested $50 million, they said, to bring it up to international standards of safety and production.

And, according to an acquaintance of mine in the emerald business, under Minería Texas Colombia, the huge mine had become a model operation in the Muzo region. He described carefully constructed tunnels and high security.

But then, two weeks ago, trouble struck - The miners uncovered a super-rich emerald vein. What should have been a bonanza for the company devolved into travesty as more than a thousand informal miners, some armed with guns and dynamite, tore down fences, despite the presence of security guards, soldiers and police, and invaded the mine to grab a share of the ore for themselves.

"It is incredible that this can take place on private property, placing in danger more than 50 million dollars invested in machines and equipment. What's more, the lives of more than 800 of our workers are in play," the company told journalists.

The invaders, for their part, undoubtedly justified their actions based on a feeling of ownership: They were lifetime emerald miners in the area, which is overwhelmingly poor, so why should foreigners profit from this rich strike?

The Texans evidently intend to persevere in their operations, in which they have invested so mightily - but presumably with stronger security.

In Bogotá's emerald district, the rich vein also had consequences. Another emerald dealer told me that prices of certain types of emeralds had plummeted. I was dubious, until I learned about how the Puerto Arturo episode had flooded the market.

Puerto Arturo is not only Colombia's largest emerald mine, but under Carranza's ownership also produced what were reported to be the world's largest and most valuable emeralds.

In past decades, Carranza and other 'emerald czars' fought wars over control of the industry, in which hundreds of people were killed. And the region's emerald mines, despite employing many workers and producing a fortune in gemstones, pay remarkably little in taxes and royalties. Emerald mining, as with much of Colombian mining, continues to be dominated by danger and informality. With terrible regularity, informal gold mines, particularly in the Pacific Coast region, collapse or are flooded, killing dozens of miners. Unregulated (and some regulated) mines also devastate ecologically sensitive landscapes and poison rivers with cyanide and mercury.

Minería Texas Colombia's efforts to improve and formalize its mine are a step forward. But mining in Colombia badly needs more control to reduce its human and environmental tolls. 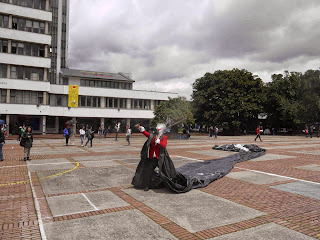 This colorful one-man plaza performance took place today on the Universidad Nacional's Plaza del Ché. Altho when I asked her about its meaning, one person involved shrugged her shoulders, the message carried by this masked man dragging coattails of trash seemed quite evident to me. 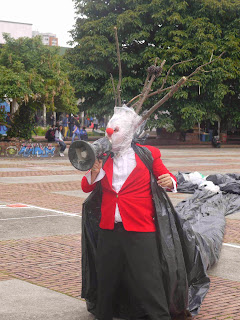 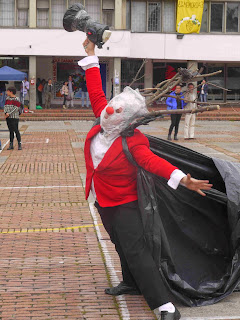 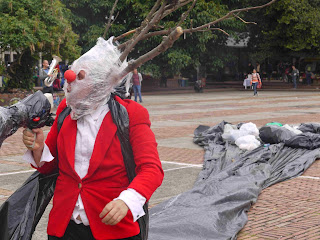 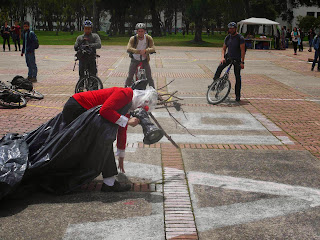 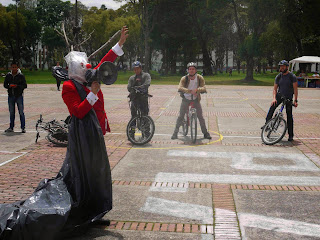 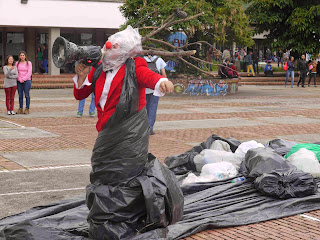 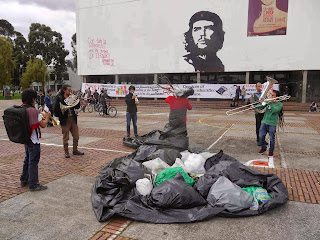 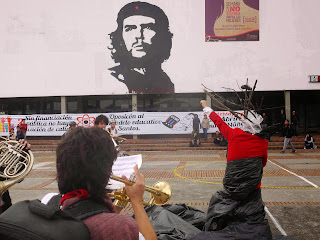 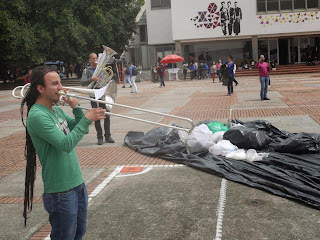 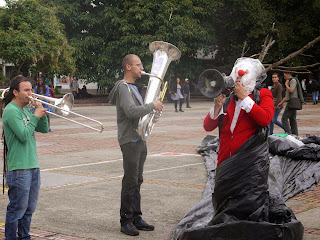 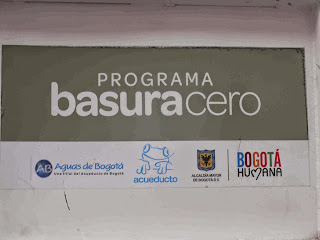 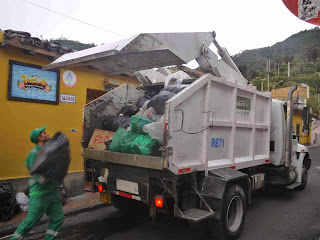 Back to the Bad Old Times? 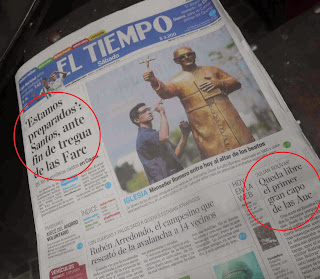 In yesterday's El Tiempo, the coincidence of two headlines sent a disturbing message about the danger of bad old times returning.

In the upper left-hand corner, a report about the end of the informal truce between the government and the FARC guerrillas. The peace negotiations in Havana, Cuba look to be in danger of breaking down, in the wake of a FARC ambush which killed 10 soldiers and military bombardments in which the government claims to have killed two dozen guerrilla fighters.

The peace talks have bogged down over the past year, primarily over what the guerrilla leaders' fate

would be after a peace deal. The guerrillas want to become politicians, but the overwhelming majority of Colombians wants to see them in prison.

In the lower right corner, the paper reports the release from prison of Julian Bolivar, the first major paramilitary leader to win his freedom after serving the 8-year prison term stipulated by the controversial Law of Peace and Justice. Under the law, paramilitaries who confessed to their crimes and ceased committing crimes receive maximum 8-year prison terms. Bolivar, whose real name is Rodrigo Pérez Alzate, had confessed to responsibility for or been convicted of crimes including massacres, recruiting children, driving peasants off their land, torture, narcotrafficking, assassinating union leaders, money laundering and 'barbarous acts' as head of a paramilitary group in the Antioquia and Magdalena Medio regions.

The crimes were committed as head of the Bloque Central Bolívar, under the pretense of battling leftist guerrillas.

The succession of paramilitary leaders being released has victims worried that they will return to crime and terrorism and take vengeance on those who denounced them. And the ohe ongoing resurgence of the conflict with the guerrillas makes that seem all the more possible. 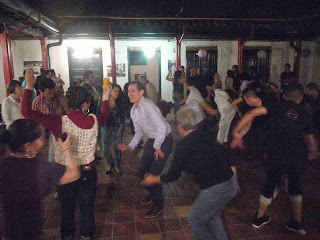 The Fundación Delia Zapata is one of the little-known jewels of La Candelaria. Named in honor of
Delia Zapata Olivella, who dedicated her life to researching and popularizing the music and dance of Afro-Colombian peoples of Colombia's coastal regions. Later in life, she traveled to Africa to find the roots of AfroColombian melodies.

The foundation, housed in a grand old building on the south side of Calle 10 between Carreras 2 and 3, offers dance classes and musical events.

Delia Zapata was born in 1926 in Cordoba and died exactly 14 years ago on May 24, 2001. Ironically, she was killed by a disease she contracted during a research trip in Africa. 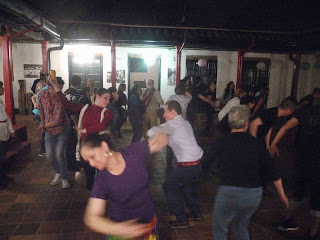 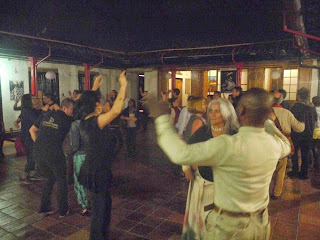 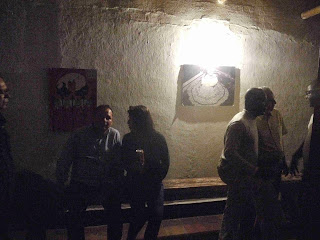 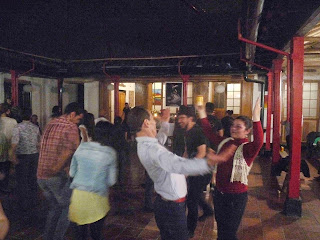 Andrés Arango's paintings reflect his wry view of Colombian society: Llorenti's famous flowerpot, symbol of the revolution, converted into a Coca Cola bottle; plastic bottles used to keep a bather floating; hangers on on the backs of buses.

arango's perspective, which he says mixes in elements of magical realism, is on display now in the Gabriel Garcia Marquéz cultural center. In his telling, Colombia is a zany place, semi-disfunctional, with a sense of humor about itself. 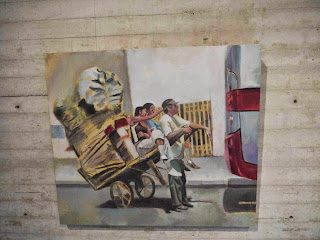 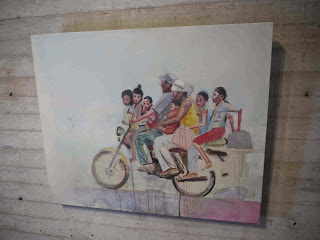 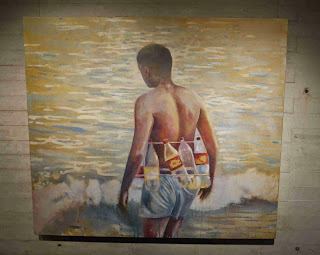 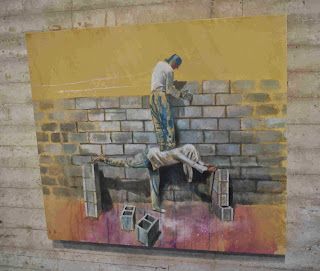 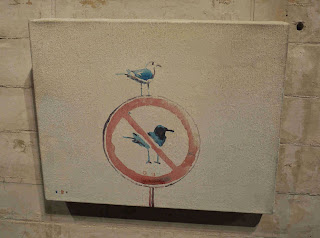