Went to the U.S. Embassy the other week to get a new passport, and the folks there who offer support services for U.S. visa seekers are suffering.

The kid who took my passport photo pointed to the mostly empty space in front of his shop. Last year, that was full of visa applicants and their relatives, he said, sadly.

"That man has got us like this," he said, sticking his forefinger into his own neck.

Not difficult guessing who 'that man' is.

Coincidentally, I've read that U.S. tourism and applications by foreign students are down, too.

I'm in the San Francisco Bay Area right now, where the Internet economy is booming. Seems like every other shop and restaurant has a 'help wanted' sign: but Trump's stricter immigration laws are keeping out the immigrants who want to do those jobs, harming the economy.

Add to Bogotá's memorable museums its newest one: The Fiscalía's.

Yep, seriously. The Fiscalia, or Attorney General, the agency charged with accusing and prosecuting criminals, has played a key role in the biggest dramas in Colombia's recent decades, many of which are on display in the new museum. Most impressively, the museum also includes the government's own sins.

The museum is also unintentionally a testament to the violence, corruption and general mayhem which drug prohibitionism has inflicted on Colombia. Not surprisingly, one subject the museum does not touch is decriminalization - despite its demonstrated success - because it would take away the Fiscalia's business.

Everybody's heard of Pablo Escobar, but many fewer know the name Carlos Lehder - even tho he was crazier and perhaps even richer than Escobar. Lehder admired both John Lennon and Adolf Hitler. He tried starting his own populist political party. And he even bought a Caribbean island, kicked off the inhabitants and used it to party and stockpile cocaine. But he was so unstable that Escobar supposedly betrayed him to the DEA. Lehder is still rotting away in a U.S. federal prison.

Another less-remembered character of the era was the crusading Minister of Justice Rodrigo Lara Bonillo, who prosecuted members of the Medellin cartel and was gunned down for it in Bogotá in 1984. His killing triggered the war between the government and Esocbar.

In the end, the leaders of the less-famous Cali cartel were captured and extradited to U.S. prisons, where some still remain. In contrast, many Medellin cartel leaders gave themselves up and received short sentences in Colombia - despite being much more murderous.

Both the Medellin and Cali cartels were destroyed during the 1990s, and the paramilitaries and most guerrillas have also since disbanded. Yet, today Colombia probably exports record amounts of cocaine.

However, foreigners, particularly those recently arrived in Colombia, may not recognize other episodes - such as the Proceso 8000. 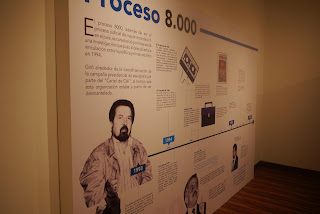 In the Proceso 8000, Liberal Party Pres. Ernesto Samper's (1994-98) presidential campaign was discovered to have received money from the Cali cocaine cartel.

The investigation brought the conviction of other government officials, but Samper himself was found 'neither guilty nor innocent' by a Congress - altho today few doubt he knew about the dirty money. It led to Washington canceling Samper's U.S. Visa - a huge embarrasment for a close ally - and the U.S. The episode was named after a folder containing key documents - altho I did not see that folder in the museum.

One might trace Colombia's rejection of its traditional political parties and the eventual election of Pres. Uribe partially to the Proceso 8000 scandal. After Samper, came Pastrana's failed negotiation with the FARC, and then Uribe's U.S.-backed military offensive against the FARC, which many believe forced them to the bargaining table - albeit at a huge cost in human rights. The hard-right Uribe did not come from either of the two traditional political parties.

After the end of the Cali and Medellin cartels, the violence and narcotrafficking didn't let up. Colombia still had to deal with the socialist FARC and ELN guerrillas, which were born in the 1960s, and their right-wing paramilitary enemies.

The government didn't defeat any of these groups. The paramilitaries demobilized during the mid-2000s, receiving up to 8-year terms, despite horrific crimes. The government also negotiated a controversial demobilization deal with the FARC and is now talking to the ELN. 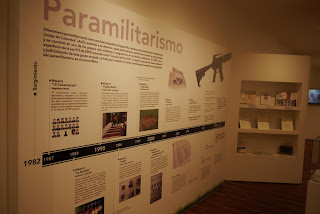 Probably the darkest chapter in recent Colombia history was paramilitarism - the right-wing death squads organized by landowners with government and military collaboration, which carried out many massacres, often of campesinos, including women and children, based only on suspicion of sympathy for the guerrillas.

One of the more notorious of the massacres carried out by paramilitaries with collaboration from the regular military was that of La Riochela, in 1989 in Santander Department. Fifteen judicial investigators had traveled to a remote area to investigate killings. Paramilitary fighters stopped them and cold bloodedly murdered twelve of them under orders from a Medellin cartel leader and with support from the regular military. After the killings, the 'paras' hid their weapons in a military base.

Uribe government. At that time, the military gave military units rewards of bonuses and time off for killing guerrillas. Some units responded by kidnapping poor young men, killing them and disguising them as guerrillas in order to collect the rewards. The killings received national attention when a group of young men were kidnapped from Soacha, in south Bogotá, and later found dead near the Venezuelan border, labeled as guerrillas.


Running thru the museum's displays, of course, is the subject of drug trafficking, which has helped finance nearly all of Colombia's violent groups (and some non-violent ones).

And cocaine can and has been smuggled inside nearly everything.


Unsurprisingly, the museum does not touch the subject of decriminilizing drugs, a policy which has produced lots of benefits when tried in Portugal. That doesn't surprise, because such a policy would reduce the Fiscalia's business.


You can leave your bike in the parking lot across the street. Admission is free.

A Drug War Disaster - or a Lesson?

Washington's unhappiness with the boom in Colombia's cocaine production, which has more than doubled over the last few years, has brought 'the most serious deterioration in bilateral relations in almost two decades,' says El Tiempo.

The situation has the Trump administration threatening to 'decertify' Colombia's drug-war efforts and Colombian authorities in response pointing out that Colombia has seized far more drugs than has the U.S., with far more resources.

But Colombia might also point to the U.S.'s inability to control illegal marijuana cultivation or the consumption of all kinds of drugs, either legal or illegal.

But, despite having all the ingredients to win, Colombia's anti-drug efforts have failed.

This isn't the fault of Colombia, but of economics. Where there's demand for a product, there will be supply. If Colombia had somehow managed to erradicate its coca leaf crop, traffickers would simply have planted instead in Ecuador, Brazil, Venezuela, or even Asia or Africa.

Colombia is only fortunate - or smart - that the ongoing drug boom has not brought with it the violence it did decades ago.

The U.S., for its part, should recognize that its war on drugs has been a deadly, expensive mess, and that instead of throwing away more money and endangering relations with a close ally, it should decriminalize cocaine and switch to harm reduction policies.

But good luck finding that sort of sanity in the Trump administration.

Chalk this one up on the list of brilliant contributions to the public good by our city government:

Food donations to the homeless must meet high hygenic standards - or the hungry don't eat!

According to one police official, the new Police Code sanctions the distribution of food that doesn't have a sanitary registration - whatever that is. Perhaps a five-star restaurant, or at least a Juan Valdez, for the homeless?

The police also claim that distributing food to the homeless can cause fights and even homicides. A strange idea, which only makes one wonder what will happen if these people DON'T get food: Will they simply starve to death silently?

Anyway, what sort of hygenic standards do the homeless people's meals comply with when they DON'T receive handouts from churches and other groups? Take a look:
And pity the charitable folks who want to help the homeless - but are afraid of getting punished for doing so!

This is yet another example of government officials' urge to control everything they can, and their lack of empathy for those actually living in the real world.

Refrigerator Moving as a Spectator Sport


If you live on the upper floor of a building with a narrow stairwell and no cargo elevator, then have your meals delivered and die of fatty artery disease. That's unless you want to become the neighborhood spectacle by having a bunch of strong men perilously deliver your refrigerator thru your window, as these residents of the Las Nieves neighborhood did today. 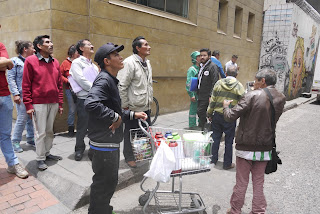 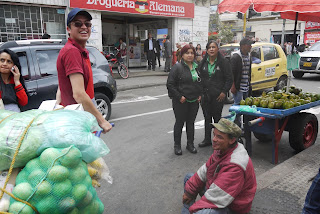 I had to leave the scene, but later on a witness informed me that, with the aid of thick ropes and a board, they managed to suspend the refrigerator horizontally and insert it thru the window. No more take-out!

'Francis in the Land of the Narcos'

,No nation likes to be labeled a 'narco state' - even when there's an element of truth in it. So, when Spain's El Mundo newspaper ran a story about the Pope's visit entitled 'Francisco in the Fatherland of the Narcos,' it generated lots of anger here.

Of course, if any nation ever was a narcoland, it was Colombia back in the '80s and '90s, when Escobar, his associates and his rivals in Cali kidnapped and assasinated politicians almost at will and even threatened to destroy the state. Today, despite record levels of cocaine production, Colombia has left the narcos era behind.

But, altho Colombia doesn't appreciate being reminded of Escobar & Co., some Colombians don't mind making money off of that legacy.

This Medellin tour promises that it's the real, original Escobar tour - and promises to contribute part of its income (but not how much) to social causes. This tour has 'EVERYTHING IN EXTREMES: POWER, MONEY, BETRAYAL, DRUGS, WOMEN, CRIMES, ARRESTS, ESCAPES, HIS OWN ZOO AND ALSO HIS OBSCURE DEATH.' the website points out, before veering away from the drama and violence to point out that many Colombians were impacted by the drug trade, and boasting that theirs is 'The tour accepted and recognized by local people.' 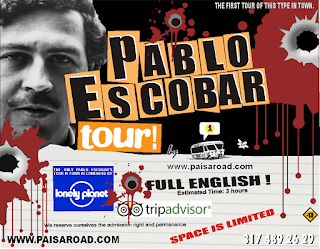 The scale of the tragedy from the narcos era would be hard to overestimate. Some say that Escobar killed 50,000 people, thru bombings, assassinations and general mayhem. Adding to that the other cartels and the general atmosphere of violence produced a homicide rate hundreds of times higher than that of a 'normal' European nation.

Here in Bogotá, the Colombian mafia tour makes no bones about what it's about: 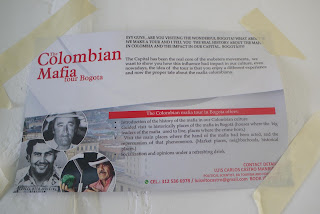 While the 'Heroes tour', subtitled 'Colombia vs. Pablo Escobar', seems to aim to ignore Escobar by focusing on him. 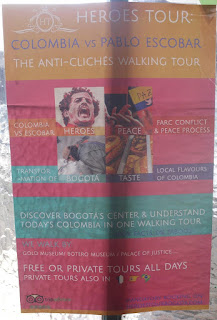 Colombian television has never shied away from making miniseries about drugs, cartels, guerrillas and paramilitaries. However, there seems to be a bit of resentment against Netflix, which is making the real money with its Narcos series.

As for the El Mundo article, it was actually a thoughtful piece about Medellin's renaissance and the city's role in Catholic Church history, particularly in the development of Liberation Theology. And the newspaper's editor admitted that the headline was designed to attract clicks. Such is the desperate nature of today's newspaper business.

A Papal History of Bogotá

The Museo de Bogotá, located on Calle 10 between Carreras 3 and 4, has an exposition about the two previous papal visits: Pablo VI in 1968 and John Paul II in 1986. The city carried out some urban projects related to the visits, in particular a neighborhood built for Pablo near Simon Bolivar Park, which still carries his name. These are documented in the exhibit. But the real interest are the historic photos of central Bogotá sites. 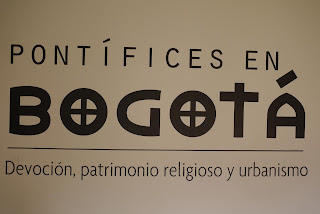 And, to see Bogotanos' present-day Catholic fervor, take a look at the crowds still lining up in Plaza Bolivar today to see the image of the Virgen of Chiquinquira: 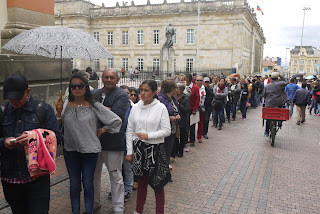 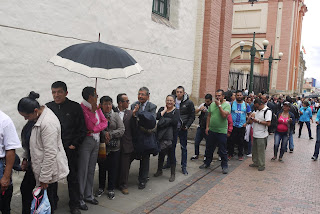 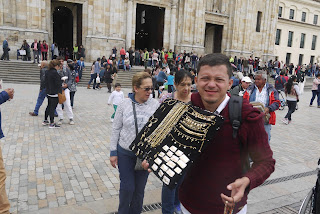