An Ear for the New Year! 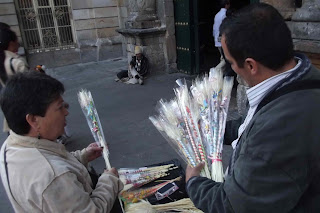 A prominent part of Bogotá's New Year's tradition are these espigas, or ears of wheat, which are supposed to bring good luck in the new year.

That the government and guerrillas reach a peace deal which ends Colombia's long and terrible armed conflict.

That Bogotá's mayor makes progress on problems like trash collection, traffic congestion, pollution, crime, poverty...and on and on. 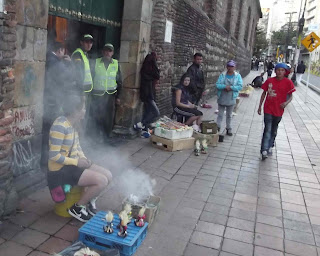 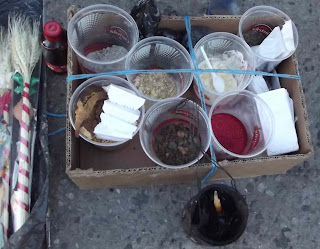 
The ending of 2012 also looks like the departing of Venezuelan Pres. Hugo Chavez, who is in a Cuban hospital suffering from complications from cancer.

The long-winded Chavez hasn't been heard from publicly for more than two weeks, and his vice president says his condition is 'complicated.' The Venezuelan people don't know the details, however, since the Chavez administration has kept the details of Chavez's condition secret. That's also why he's had his treatments in Cuba, where he's safe from a nosey free press (and it's no gesture of confidence for Venezuela's much-vaunted health care system).

Chavez's suddenly critical condition has also revealed a bait and switch of historic proportions. During the recent presidential campaign, Chavez acted as tho he was recovering - even tho he undoubtely knew his prognosis was poor. Venezuelans reelected Chavez, who has already held power for a dozen years, to yet another six-year term. Now, it looks obvious that even if El Comandante survives, he'll be no more than an invalid and a figurehead.

Chavez's illness is sending his country into unknown political territory. It's not clear what will happen if, for example, Chavez cannot make it to his Jan. 10 inauguration. Chavez designated his vice president Nicolas Maduro to succeed him. Maduro has been a loyal chavista, but lacks Chavez's charisma. Will Chavistas support him, or more ideologically figures such as Diosdado Cabello, or Chavez's older brother Adan? It seems likely that no other Chavista politician could win an election against the opposition.

Chavez had seemed to be assisting with the government-FARC peace negotiations also being held in Cuba. Will a Chavez sucessor help?

Other possibilities are scarier. What if a weak Chavez succesor tries to consolidate his power using nationalism by confronting historical rival Colombia?

It also strikes me as ironic that Chavez, a larger-than-life figure who often announced supposed conspiracies to assassinate him, is in the end being felled by a mundane illness which respects no status or power.

One time, back when I was a journalist living in Caracas, Chavez announced that someone had tried to shoot down his airplane with a surface-to-air missile. I visited the beach under Chavez's landing path and talked to residents, whose accounts made it clear that no attack had happened - and that an attack probably wasn't even realistic.

By the same token, Chavez's 'socialist revolution', while denouncing politically incorrect dangers, ignored inconvenient, mundane ones. For example, it was only several years into his presidency that the Chavez government finally eliminated leaded vehicle fuel, which harms children's development. Neither has his government flouridated the drinking water, a proven way to prevent children's tooth decay. Nor does it enforce air pollution laws, but it does spend billions of dollars subsidizing gasoline down to a few cents a gallon (which keeps old smog-belching clunkers on the road).

I once attended one of la revolucion's many long-winded leftie conferences, held in concrete a tower in central Caracas. I remember looking over the event's program, which included speeches denouncing genetically modified food crops, even tho not a single study that I know of has shown GMO's to harm human health. I looked out the tower's window at one of the slums crawling up the hills bordering Caracas and saw plumes of carcinogenic smoke rising from burning garbage, a proven carcinogen. So, Chavez's revolution prioritizes populist measures such as its gasoline subsidy over measures which would save lives.
Maybe it's in bad taste to suggest that a sick man contributed to his own disease, but in this case it seems to be true.

Of course, these policies are important not only for Chavez, but for the millions of Venezuelans whose health suffers because the Chavez government chooses populist measures over healthy ones. 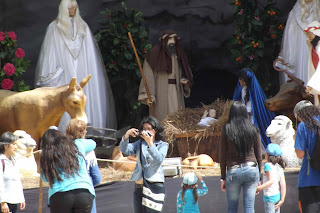 What they're billing as The World's Largest Nativity Scene is on display these days in Simon Bolivar Park. It weighs 700 tons, measures 18,000 square meters and includes 200 real people who act out 35 different Biblical scenes, according to El Tiempo. 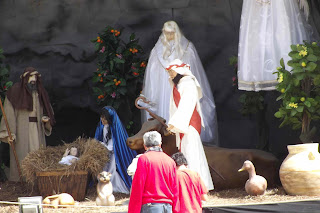 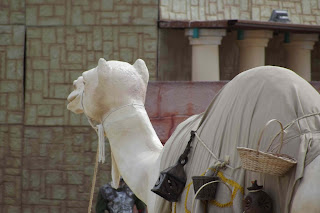 We visited Simon Bolivar Park during today's bike tour, but didn't actually visit the nativity scene, which cost 7,500 pesos. With or without the nativity scene, the park is worth visiting. It was quiet today, despite the sunny weather, probably because so many bogotanos have left town for the holidays. 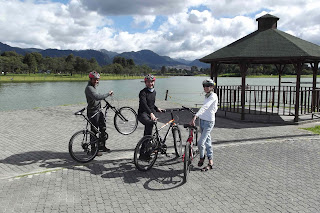 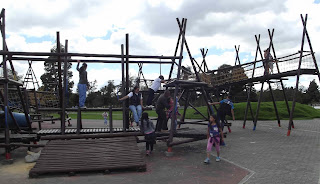 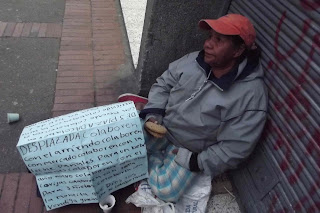 As a sort of unintential counterpoint to Carlos Castaño's human rights exhibition criticizing the government, right across the street I met Mariana, who was begging with a sign telling her story of being displaced from her farm in Forencia, Caqueta. 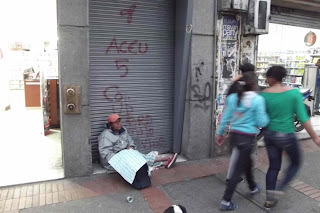 Castaño condemns Colombia's government and right-wing paramilitaries for its human rights violations and lets the leftist guerrillas off scott-free. That's not surprising, since Castaño's was a guerrilla himself.

But Mariana's story, which is all too common, gives a different and more complex perspective. Mariana said that a few weeks ago her family were campesino farmers living happily enough in Florencia, in Caqueta Department.

But the region was used for growing coca leaf, the base ingredient for cocaine, and various illegal groups fought over it, Mariana said. And they wanted the peasants driven out, she said. 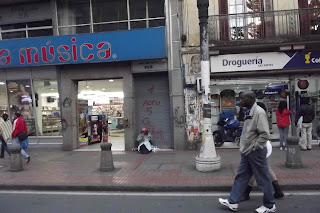 One day without warning, she said, a guerrilla group burned the family's house. Soon after, she said, her oldest son, 24, was murdered by paramilitaries. And after that, the family recieved anonymous threatening notes pushed  under their front door. She and her four children fled to Bogotá, where they are seeking government help.

It was impossible for me to be certain that Mariana's story is true, altho she sounded honest enough and gave a detailed, realistic account. But, true or not, her story is typical of the tragedies which continue happening in Colombia's countryside, with little notice from the majority of the people. Her story also shows the complexity of Colombia's conflict, in which there's blame enough for leftists and rightists.

And, sadly, as long as drugs are prohibited, violent groups like these will keep profiting from them, and victimizing people like Mariana.


Carlos Castaño, the name of the leader of the United Self-Defense Forces of Colombia, or AUC, is about the most notorious name in Colombian history thanks to the horrific rights abuses he ordered.

But there's another Carlos Castaño, who calls himself 'El Bueno' and hails from the other end of the political spectrum, who is carrying out Bogotá's most prominent one-man human rights campaign.

This Castaño, 50, came from a peasant family in the Antioquia region. At age 22 he joined the EPL guerrilla group, which reached a peace treaty with the government and demobilized in 1991. Castaño blames the EPL's leadership for accepting benefits from the government and selling out their principles. Just before the demobilization, however, Castaño said he had survived a massacre in which 6 peasants were murdered - one of many crimes and injustices which he blames on the Colombian government.

He became a farmer in Tolima. But says that in 2002 he and his family were forced to flee because of violence from right-wing paramilitaries, who may have answered to the other, EVIL Carlos Castaño, who was murdered by other paramilitaries in 2004.

Then, Carlos Castaño, el bueno, fled to Bogotá, where he set began setting up his photo exhibitions. He displays hundreds of photos on long strings strung between trees and posts on the sidewalks. Most of the photos, he says, he took himself.

"I'm just out here giving a bit of truth to the people," Castaño says.

Castaño says he's been harassed by the police, who have confisticated his photos, searched his home and even accused him of being a terrorist. He considers himself only a truth-teller. 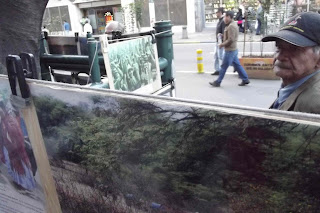 "If this is terrorism," he says, motioning to his photos, "then let's have more of it."

He hasn't had trouble recently, he says. The city's decision to ban cars from this stretch of Ave. Septima helped, as does the fact that Mayor Gustavo Petro was once a guerrilla himself - in his case in the M-19 movement.

Castaño's photos are a grab-bag of images, denouncing human rights violations, social injustices, harm to the environment - even technology (altho Castaño is on Facebook). 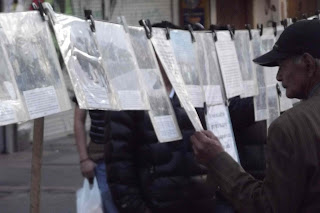 A man walks past and demands of Castaño: "Where are the photos of the FARC and ELN guerrillas' human rights violations?"

Castaño smiles back at him. "Don't worry," he replies, "the RCN and Caracol television and radio networks are transmitting plenty of that." 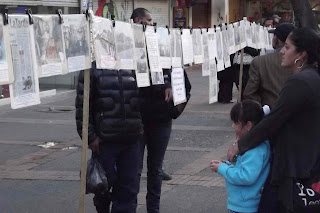 Colombia's guerrillas and right-wing forces have all committed grevious human rights abuses. But, while virtually nobody defends the paramilitaries, a significant group of self-deceiving idealists, both here and abroad, persist in celebrating the guerrillas, despite all of their crimes against the poor. For an example, see Mariana, the displaced woman begging across the street from Castaño.

A steady stream of passers-by stop and ponder Castaño's images. His low-tech exhibition likely gets many more visits than most websites about Colombian human rights. For Castaño, who travels around Colombia and even internationally displaying his pictures, the exhibition is not only a statement - it's also a living for him.

"If you like the photos, how about contributing a few coins or a bill," he calls out, offering his collection can.

So, Castaño has joined the ranks of the professional displaced people, whom we see begging on Colombia's sidewalks displaying signs pleading 'Desplazados Por La Violencia. Favor Ayudarnos.' But turning into a lifetime beggar only perpetuates victimization and helplessness. Castaño may be living off of his tragedies, but at least he's also doing something constructive.

An idealist, Castaño expresses pessimism on Colombia's prospects for resolving its human rights problems and persistent injustices. In the FARC-government peace negotiations just starting up now in Havana, Cuba, Castaño expects the FARC leadership to sell out just as he accuses the EPL leaders of having done two decades ago. 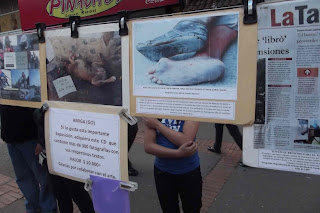 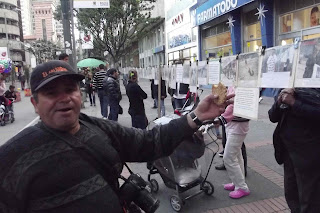 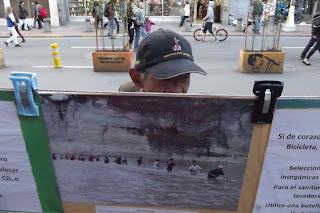 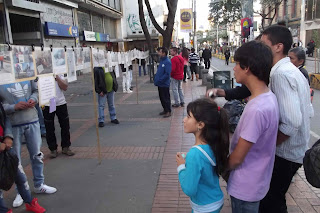 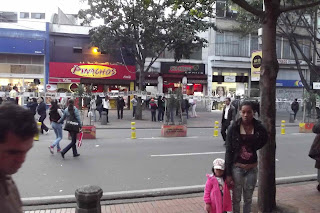 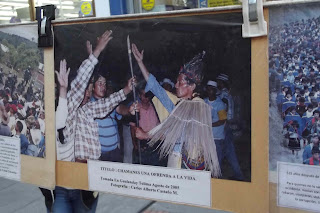 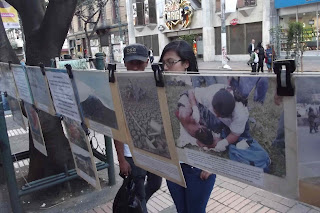 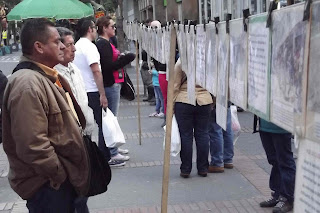 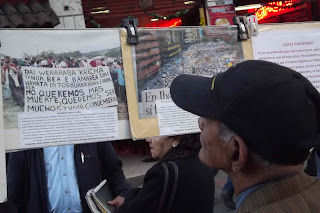 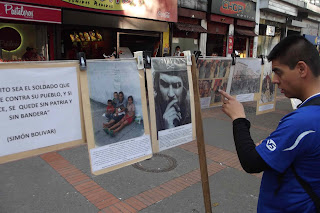 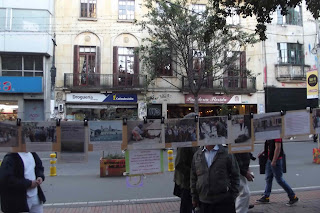 And You Thought the Traffic Jams Were Bad.... 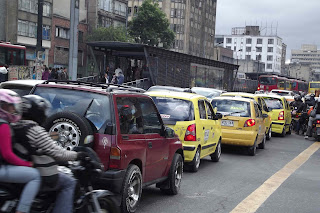 Congress, in all its wisdom, has included in the tax reform bill which it just passed and Pres. Santos will sign, a cut in gasoline prices. Colombians will cheer and senators will gain votes, but, by promoting consumption, driving and traffic congestion will all get worse - besides the impacts on pollution and climate change.

What's more, less gas tax revenue will mean less money for schools and parks - or more taxes on tings like food and technology.

Not content with that, Congress all included a tax break for the sale of older used cars - which are often the most highly polluting vehicles.

When legislating, Colombians would benefit from more good policymaking and less populism.

It was an elegant concept when someone designed it: An avenue bordered by sculptures, amphitheatres and public spaces descending from Bogotá's Eastern Hills down to the Palacio de Nariño. And perhaps it was, back whenever it was completed.

But then someone seems to have forgotten about the project. Today, the series of carefully designed landmarks along Calle 7 remind me of something from an abandoned city. Stairs leading nowhere, vacant amphitheatres, surreal, half-completed sculptures. 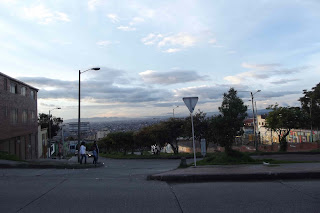