Natural History at the National University

Think of Bogotá's National University and graffiti, radical politics - and maybe even education - come to mind.

But the university's sprawling campus in the Teusaquillo district, known as the Ciudad Universitaria, contains several museums which are worth a visit, especially as part of a look at of the campus's leftist politics, as expressed in its colorful graffiti and frequent demonstrations.

One of those museums, which also include an art museum, a herbarium, even one displaying musical instruments, is the Natural History Museum, which the city might look toward as inspiration for a full-scale museum about Colombia's great human and ecological diversity somewhere in central Bogotá.

As it is, the university's effort is an interesting, if low-budget, museum, which should have particular interest for Bogotá residents (especially if they have kids and do not have queasy stomachs) thanks to its displays about the region's zoological, paleontological and arqueological histories - which receive less than their deserved attention on a continent where the Incas, Aztecs and Mayans and Argentina's dinosaurs hog the show.

The museum also has temporary and changing associated exhibits, including a current one called 'Animal Bodies' - a zoological version of the famous and grotesque traveling exhibit of preserved human tissues, and another called 'Zoom' of magnified photos of colorful plants and insects.

The National University also has several off-campus museums in Bogotá, including the Claustro de San Agustin, just west of the Casa de Nariño, and the one-time home of martyred politician Jorge Eliecer Gaitan, in the Teusaquillo neighborhood a few blocks west of the Parque Nacional. 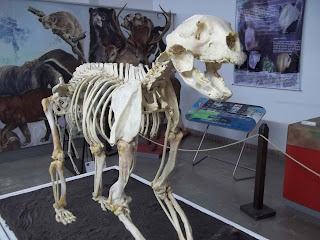 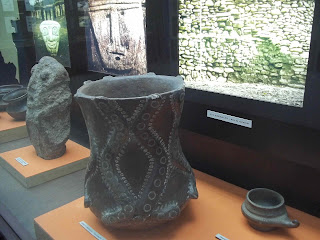 We've heard lots recently about the demolition and planned replacement of Seventh Ave.'s bridge over 26th St., which has meant pedestrianization of part of Seventh Ave. as well as huge traffic jams in central Bogotá.

But Bogotá also has a historical patrimony of bridges, altho almost all of them are now buried underground.

When the Spanish first arrived in Bogotá the city was predominantly seasonal wetlands, with rivers flowing down from the Eastern Hills and spreading out across the savannah.

Over the centuries, the Spanish and later the Colombians built bridges across those rivers. Today, with most of those rivers buried under cement and asphalt, those bridges have disappeared as well. About the only old bridge visible today is the Puente Boyaca, (renamed from Las Aguas in 1905) and now partially uncovered on the Eje Ambiental, near the Las Aguas Church (and the Spanish-Colombian Cultural Center, whose construction never gets going).

Today, the Rio San Francisco is alsopaved over except for its upper reaches, and represented by a string of pools down the avenue's center.

But, once the river had 18 major bridges, a map says, across which Bogotanos traveled between La Candelaria - then most of the city - and the city's north.

Last year, during construction of the new TransMilenio line along Carrera 10, workers uncovered walls belonging to an old bridge which spanned the Rio San Agustin near the avenue's intersection with 6th St. The old bridges are considered historical and architectural landmarks, despite their invisbility, and so the TransMilenio designs were altered so as not to disturb the old brickwork. I visited the site, where the Bicentenario Station and a ramp interchange are being built, and could see no sign of the old bridge. The men working on the project knew nothing about it either.

One of the few rivers still exposed, albeit in a canal, is the Rio Arzobispo, which runs thru the Parque Nacional and the Teusaquillo neighborhood. Like the other rivers, tho, the Arzobispo (said to be named for an archbishop who committed suicide by leaping over one of its waterfalls during the 1800s) reeks from pollution drained into it by illegal hillside homes and homeless people who live under its bridges.

Is the FARC Reforming?

The FARC guerrillas' statement yesterday that they'd stop kidnapping civilians and release the ten soldiers and police officers they are holding in the jungles is either a landmark moment in Colombia's armed conflict or a cynical maneuver by a weakened guerrilla force.


El Tiempo newspaper opines that Colombians should wait and see whether the guerrillas actually fulfill their new vow. They're right.

It's hard to see the guerrillas truly giving up what is one of their most powerful tools for making headlines and extorting labor, resources and money from Colombian civilians. That's because behind the 'vacuna' which many ranchers and businesses in rural and small town Colombia pay to the guerrillas lies the threat of kidnapping. If that threat really disappeared, one of the guerrillas' big revenue streams could dry up.

Still, the guerrillas' promise to end kidnapping of civilians and to free more kidnappees is a hopeful sign, if only because it seems to indicate an openness to making concessions in order to open dialogue with the government. But only time will tell whether or not this is a sincere step forward by a group which has caused tremendous damage to Colombia and its people.

The guerrillas' renunciation of what has historically been an important source of income for them might even be a negative sign if it means that they are earning so much from the cocaine business that they no longer require extortion and kidnapping income.

In any case, nobody should conclude from the guerrillas' renunciation of kidnapping that they have become a humane organization. Kidnapping is only one of the FARC's many human rights violations, which also include planting landmines, recruiting children, driving peasants from their homes and acts which can only be called terrorism, like the recent bombing in the small Pacific coast city of Tumaco. That bomb killed mostly poor, Afro-Colombian civilians - not exactly the country's traditional elite.

A Walking Revolution on Seventh Ave.

Seventh Ave. showed off its new look today as a calm, walkable, breathable street, which remains a transit corridor, even if some people will deny that.

The long-delayed demolition of Seventh Ave.'s bridge over 26th St. was done today as part of the two new TransMilenio lines being built on 10 Ave and 26th St. This is one of the last, but also the longest and most difficult steps in the troubled expansion project, which originally was supposed to be finished in 2010. City officials say that building a new and presumably better bridge will take five months - and we all know how accurate their previous projections have been.

But Mayor Gustavo Petro is using the demolition of this major bridge to experiment in 'humanistic' transit planning, by pedestrianizing a stretch of Seventh Ave. Today, the blocks between 19th and 26th Streets and beyond were off limits to almost all motor vehicles. The stretch of Seventh Ave. between Plaza Bolivar and 19th St. will follow, Petro has said. This is a sort of test for a possible permanent pedestrianization of central Bogotá, Petro says.

The pedestrianization is opposed by many retailers, including the National Federation of Retailers, FENALCO. Retailers are concerned that fewer shoppers will venture downtown and that the closed street will be invaded by pickpockets and illegal, informal vendors. But in some other cities pedestrianization has helped retailers, by making shopping safer and more pleasant. 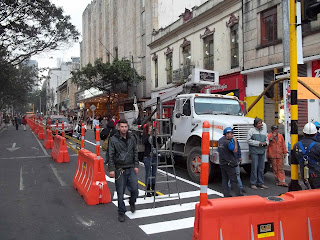 
This evening I walked onto Seventh Ave. near Jimenez and, for a few brief moments, it seemed as tho the much-missed Septimazo had returned.

El Septimazo was a tradition in which the stretch of Seventh Ave. between Plaza Bolivar and 19th St. was shut to cars Friday afternoons from 5 to 9 p.m. to make way for pedestrians, street vendors and performers.

But the previous City Hall administration cancelled El Septimazo, with no public explanation. However, the practice of shutting down part of one of downtown's principal arteries had been criticized by car drivers and some retailers, who objected to the competition from informal street vendors, who pay no rent or taxes. There were also concerns about crime.

Amidst its real problems, El Septimazo was also a real celebration of socializing, music and street games.

Alas, today's 'Septimazo' turned out to be only a temporary closing caused by a protest against police brutality. After negotiations, the protesters agreed to demonstrate on the sidewalk.

New Mayor Gustavo Petro has talked about bringing back El Septimazo, and I hope that he does it. In any case, Seventh Ave. will be pedestrianized beginning tomorrow because of the demolishing of the bridge over 26th St. for TransMilenio expansion work. Officials say that replacing it will take five months. We'll see how that goes.

During the bridgeless period, Mayor Petro says that the stretch of Seventh Ave. between Plaza Bolivar and 26th St. will be progressively pedestrianized. That will be an interesting experiment. The city has promised to prevent the avenue from being invaded by informal vendors, who take sales away from stores but pay no rent or taxes.


Without El Septimazo, the vendors and performers generally do their thing on the sidewalks.