When residents of Cajamarca, Tolima voted recently in a non-binding referendum against AngloGold Ashanti's planned La Colosa gold mine I was surprised, particularly by the overwhelming 97-to-3 percent vote margin.

After all, the mine would have brought investment and jobs to the region, albeit with a big environmental cost.

To the credit of the South African-based company's credit, a few days ago it suspended operations at La Colosa, despite insistence by the Ministry of Mines and Energy that the referendum was merely symbolic. That decision ended 400 jobs, according to the company.

"It's a positive sign for democracy," Renzo García, of The Committee in Defense of Water, told the El Espectador newspaper.

But would the end of this mine, estimated to contain 30 million ounces of gold, be a clear win for the environment?

Undoubtedly, a huge mine like this one would destroy a huge surface area and consume and pollute lots of water. And its trucks and machines would pump lots of dirty gases into the atmosphere.

But what is the alternative? If these 30 million ounces of gold aren't produced by La Colosa, gold supplies will be lower and prices will rise a bit worldwide. That will incentivize gold mining elsewhere - including much more destructive illegal mines.

Big corporate mines, for all of their impacts, do at least have the resources and sophistication to utilize techniques to minimize pollution and dangers to human health. (And if they don't, then at least there's somebody to sue.) In contrast, illegal and informal miners are generally impoverished, unsophisticated people who use the most dangerous methods to strip gold from the soil. Near Colombia's Pacific coast, hundreds of rivers have been devastated by illegal gold mines, and even residents of towns have dangerous levels of mercury from the mines in their blood.

All of which is not to say that the La Colosa mine would be a positive thing - but at least to ask the question.

So, you're self-proclaimed socialist 'revolution' is being criticized harshly as undemocratic by the head of an international organization you belong to.

And for good reason: After all, you've invented obstacles to block a recall referendum to which your Constitution gives citizens a right.

And you've used the Supreme Court - which you recently packed with your supporters - to annul every law issued by the opposition-dominated Parliament.

And you've even suspended regional elections, which your government would be sure to lose.

Not satisfied with all of that, you've shut down and banned critical media.

So, it's perfectly understandable, if still unjustifiable, that Venezuelan Pres. Nicolas Maduro intends to withdraw his nation from the Organization of American States (OAS), whose leader has strongly criticized Maduro's trampling of democratic institutions.

The Venezuelan government's flight from well-founded criticism marks the sad end of one of Latin America's oldest democracies. And Venezuela's descent into authoritarianism and violent repression of government opponents creates many potential problems for Colombia, beginning with the economic and political refugees now flooding across the border.

Authoritarian states are more likely than democracies to enter violent confrontations, and Colombia and Venezuela have a history of tensions, over territory, smuggling, migration and the activities of illegal organizations.

And the situation is worsened by Venezuela's economic tailspin, which could drive Maduro to seek a scapegoat - who could be Colombia.

Unfortunately, Venezuela's pending withdrawal from the OAS will only confirm its path toward dictatorship.

Thanks to massive public outcry by readers of this blog, the city finally got its act together some months ago and installed this sound sculpture at the intersection of Calle 19 and Carrera 3, across from the Centro Colombo-Americano. Bogotá's first 'sonic sculpture,' by Oswaldo Maciá, a Cartagena native who lives in London, is supposed to broadcast the sounds of birds chirping across the traffic lanes onto the sidewalks. However, I haven't noticed anything.

The work is named 'Scene Under Construction,' and was selected from 72 entrants. I suspect that some of the other works would have contributed more to the traffic island. 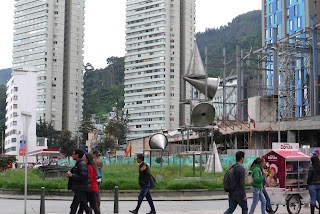 When torrential rains pushed tons of mud over the town of Mocoa, in Putumayo Department, killing more than 300 people at the end of March, many condemned the 'natural disaster.'

However, the disaster's iimpact was made much worse by human actions which prepared the way. Colombia is suffering an accelerating deforestation. And the region surrounding Mocoa had been severely deforested during recent decades, reducing the soil's capacity to soak up rainwater. When rain falls onto deforested soil, it runs off quickly, carrying soil, trees and rocks with it. Forests can also serve as protective barriers. In fact, in El Carmen, the one Mocoa neighborhood which escaped destruction, residents had preserved their protective forest.

More broadly, The New York Times reports that more frequent natural disasters in places such as Colombia and Peru appear to be tied to human-driven global warming.

Before rushing to condemn the vagaries of nature, Colombians should also reflect upon their own actions.

A White Elephant Towering Over Bogotá?

The BD Bacata skyscraper started out in the year 2013 with great promise - or at least promises. Colombia's new tallest building - and the second tallest in South America - would be the world's first crowdfunded high-rise and produce returns for investors at double the bank rate. The two-tower complex - to include a shopping mall, hotel, luxury apartments and offices - wouldn't even worsen traffic jams in the already-congested area.

The promoters' promises sounded too good to be true, and so far they have been. Construction is now years behind schedule, and investors who each poured tens of millions of pesos into the trillion peso project, are complaining. The Bacata's builders say the project will operate this year, and the mall section looks close to completion. However, during the past weeks I haven't seen anybody working on the unfinished towers. The project'¿s backers explain that they ran into legal and other delays, including a huge rock underground.

The skyscraper was never a great idea by urban design standards. It's on a busy, chaotic avenue, with only a narrow access to its parking garage. And the building has little public space, and no green space at all nearby.

Now, I wonder whether it'll get finished, and I feel sorry for those who counted on it for a life-long 'guaranteed' income.