The media reports that obesity in Colombia is growing to North American proportions.

And a recent survey of students found that use of both illegal drugs, like cocaine and marijuana, and a legal one: marijuana, is rising sharply among youth.

But both vices and drugs - legal ones, at least - have powerful lobbies to protect their right to poison their customers. Intense lobbying recently defeated legislation in Colombia's Congress which would have required companies to label foods high in sodium, saturate fats or sugars. (As if it would make any difference, judging by the rise in consumption of cigarettes, whose boxes carry big warnings.)

Perhaps televisions, cellphones and video games should carry warning labels, as well, because of the way they promote a sedentary lifestyle and waste our time.

What's the solution? Make these harmful products expensive, inconvenient to get and uncool. That won't be easy. But a good first step would be to actually enforce the law prohibiting the sale of loose cigarettes - which goes on on every streecorner and corner shop.

Who's sabotaging Colombians' health? Everybody, including themselves.

Colombia is by far the planet's biggest cocaine producer, and the cocaine economy is booming, more than quadrupling over recent years.

Now, Colombia wants to be a world leader in another drug: marijuana.

The country's cannabis strategy is full of ironies, of course. Colombia was a world marijuana leader back in the 1970s and '80s, when Colombian Gold was prized in California high schools like the one I studied in. Of course, today pot is legal in California (although it can't be imported), and California produces lots more high quality pot than Colombia does.

But hot, humid Colombia has lots better growing conditions than do temperate nations like the U.S.,

Canada and Europe, where marijuana is increasingly legal or tolerated. In particular, Colombia has drawn lots of investment from Canada, which is in the process of legalizing recreational cannabis, altho the Canadians are careful to stress that their Colombian investments involve only medicinal marijuana.

Colombia's cocaine industry continues costing the country immense amounts of money to pay for carnage and law enforcement, while its marijuana businesses will soon be paying taxes and creating legal employment, like the tobacco and alcohol industries.

Is there a lesson here about the best way to manage mind-altering substances?

Colombia's cannabis industry suffered a black eye a few weeks ago when a group of Israeli cannabis tourists and their guide were kidnapped after visiting a medicinal marijuana plantation near Cali. The kidnappers, who were apparently dissident FARC guerrillas, released the tourists but killed the guide, after demanding an astronomical ransom from her family. Whether the kidnappers were motivated by money or paranoia about strangers entering their region is not clear. But the tragedy was only marginally related to marijuana, which was what drew the tourists into the troubled region, but did not cause the crime.

Some have suggested that the tragedy was the fault of the guide and the tourists for pursuing mind-altering substances. That's an interesting sentiment. I'll wait for them to prohibit tourists from consuming alcohol, tobacco and caffeine, as well.

If last Sunday's presidential vote proved one thing, it's that Alvaro Uribe continues ruling Colombian politics. No matter that his own presidency was marred by severe human rights violations including paramilitary massacres with evident government collusion and the horrific False Positives murders, or that his brother is in prison and Uribe himself is the object of multiple investigations for paramilitary links.

No, none of that seems to matter in Colombian politics. Eight years ago, Uribe selected his minister of defense, Juan Manuel Santos, to succeed him. Santos won the presidency, altho he proceeded to defy Uribe by negotiating peace with the FARC guerrillas. Uribe was the leading opponent of the peace talks.

Four years ago, Uribe chose Oscar Ivan Zuliaga, who came close but failed in his attempt to unseat Santos.

But now, with Ivan Duque, a fresh face in Colombian politics, Uribe has shown again his ability to be
kingmaker. Duque, a senator who is only 41 years old and has been just a few years in politics, was little known until Uribe annoited him as his succesor. On Sunday, he handily defeated Bogotá's leftist ex-mayor Gustavo Petro for the presidency.

While Pres. Santos surprised many by breaking with Uribe, it looks much less likely that Duque will do so. Duque is young and has little political experience. He lacks Santos' long family political heritage. And Uribe will be the most powerful man in Congress, making his collaboration fundamental to the president.

Another winner Sunday were the evangelical churches, most of which threw their support behind Duque. Colombia historically was a strongly Catholic nation. The 1991 Constitution converted it into a secular nation, but Catholicism continued holding great cultural and political influence. In recent decades, however, evangelicals have made great inroads among poor people, while the Catholic Church lost battles on issues including abortion and gay rights and euthenasia. The Conservative Party, which often represented the Catholic church and was one of only two parties which mattered, has lost relevance, while MIRA and other purely evangelical political parties have surged.

Duque will be indebted to the evangelicals. And, while he has said that he will respect LGBT rights, and "not rip apart" the FARC peace accord, which the evangelicals also opposed, political reality may dictate other plans.

Colombia's environment will be another great loser from this election, although it was already in full retreat. Deforestation has accelerated at a terrifying pace in recent years, and Duque's plans to pursue an economy based on resource extraction will only worsen that trend.

Many suspect that Duque, an academic and diplomat, who is only 41 and has only a few years of political experience, will be controlled by Uribe. Uribe, after all, put Duque where he is and also heads the largest power bloc in Congress.

Duque, however, will have trouble sabotaging the peace deal, which both he and Uribe opposed, because it is a ... law and because many of his likely political coalition partners supported it.

But Duque will pursue prohibitionist drug policies and an aggressive coca leaf erradication effort, even tho both have been shown to be failures. Duque will also deepen Colombia's fossil fuel-dependent economy.

It should be great news. Production of this Colombian product has more than tripled in the last several years. But unfortunately, we're talking about an illegal harvest: coca leaf destined for cocaine.

Nobody's sure why coca leaf cultivation has boomed in recent years. Perhaps the FARC encouraged farmers to plant more, with promises that one day they'd be paid to erradicate their own crops? Well, if the Marxist FARC are capable of such a capitalist wonder, then the government should put them in charge of turbocharging other parts of the economy, such as the beleagured textile industry.

In fact, the only reasonable explanation is that more demand generates more supply. Evidently, traffickers are succeeding in smuggling cocaine out of Colombia. In Europe, for example, cocaine prices have been stable recently, but purity has increased.

Colombian and United States anti-drug warriors, who have poured billions of dollars and untold numbers of lives into the war against cocaine, are recycling the same old ideas which have failed before: manual and aerial erradication and encouraging alternative crops. The government also proposes deepening the military's role as an anti-drug force - an arrangement which will confront soldiers against the same poor population which they mostly come from.

But even if those strategies did work, they'd only push more coca leaf acreage into Peru and Bolivia,
as has happened before.

In Afghanistan, another nation with tremendous U.S. influence, a different drug crop - heroin - has also boomed.

Isn't it time to admit defeat, legalize these substances, and reduce their harm?

The boom in coca plantations is also one cause behind Colombia's accelerating deforestation. If coca plantations were legal, then farmers would lose incentive to chop down jungle to hide their plots, and the state and consumers could exercise at least some influence about how and where coca wase planted.

The Decadence of the Liberal Party

During much of Colombia's history, the Partido Liberal was one of two dominant forces - along with the Partido Conservador - in Colombian politics. The Liberals produced some 30 presidents and helped introduce peace treaties with guerrilla groups, the secularization of the country and expanded rights for women and minorities.

The Liberals dominated the presidency after the end of Frente Nacional in 1974, electing 5 of the country's 7 presidents.

However, the presidency of Ernesto Samper (1994-8), whose campaign was financed by drug cartels, tainted the party (and by the same token, his succesor Conservative Andrés Pastrana's failed peace talks with the FARC guerrillas threw the Conservatives into disrepute). The 2002 election of Pres. Alvaro Uribe, who started his political career as a Liberal, moved far to the right, and won the presidency as an independent, drained both major traditional parties of relevance.

The Liberals' lack of ideological consistency may also weaken it. The party houses both far-leftists
such as e-senator Piedad Cordoba, who evidently sympathizes with both the FARC guerrillas and the government of Venezuela, and conservative evangelicals.

In this latest presidential campaign the Liberals made the mistake of choosing as their standard bearer Humberto De La Calle, who led the government negotiating team in peace talks with the FARC guerrillas. But De La Calle's candidacy never took off, receiving only 2% of the vote. And neither did the Liberals enter into a coalition with the only viable centrist candidate, ex-Medellin Mayor Sergio Fajardo.
Finally, after choosing a pro-peace candidate in the first round, in the presidential campaign's second round the Liberals endorsed Ivan Duque, the political heir of ex-President Alvaro Uribe, furious critic of the peace negotiations. A voter could be forgiven for wondering what the Liberals stand for -if anything.

Welcome to The 'New' Bronx 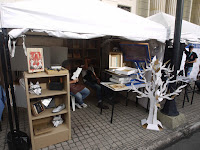 It was called a 'living hell,' with drug addicts of all ages, child prostitutes, torture chambers and illicit cemeteries, located just a few blocks from City Hall and the Presidential Palace, until in May 2016 the city sent in thousands of police and cleared it out, scattering the criminals and addicts all over the city.

Since then, that living hell has been a dead zone: Devastated buildings and vacant streets.

However, the city of Bogotá has big plans for the one-time Bronx (also known as La Ele): It aims to turn the neighborhood into an arts and clothing design district, altho it's also talked about education and housing facilities.

Until Friday, they're holding an odd festival in the ex-Bronx and the neighboring military recruitment center, with art, music and theatre, as well as photos portraying the Bronx's horrific past.

But plans here have a way of not becoming reality, and so far the signs of revitalization in the Bronx are hard to spot. However, the city is making improvements nearby. The historic but notorious Los Martyrs Plaza has been cleaned up, and the adjoining Iglesia del Voto Nacional is being renovated.

Nevertheless, just a few blocks away, addicts who might have once live in El Bronx smoke crack against walls and seated in piles of garbage. 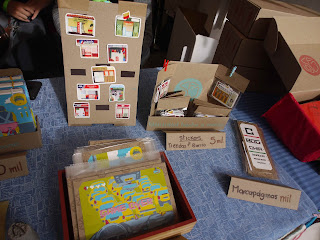 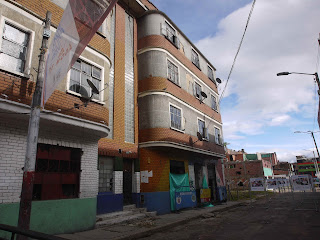 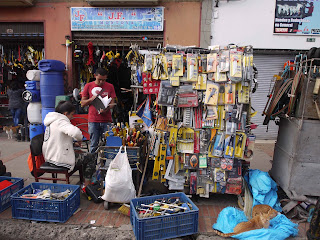 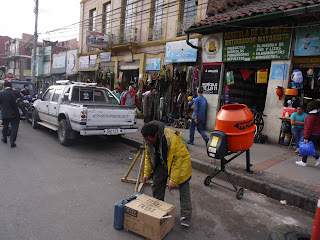 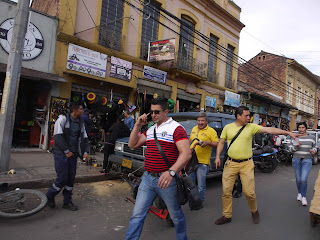