"They're driving them out of their homes, and stealing their belongings," one of the guys who works with me said angrily, turning away from the TV news.

He had been watching a report about Colombians being driven out of their homes in Venezuelan border regions and deported back to Colombia.

Those Colombians are, according to the Venezuelan government, the cause of Venezuela's problems.

Venezuela has one of the world's highest homicide rates - so high that its government has stopped publishing crime statistics. Its economy is floundering so badly that the economics ministry has quit publishing inflation statistics. Its troubles with shortages and corruption go on and on.

Now, with parliamentary elections just a few months away, the Venezuelan government has decided that the culprits are not Venezuelans, but Colombians (not to mention the evil, imperialistic U.S.)

Venezuela's continuing crisis will likely only get lots worse before things get better. And, Venezuela will badly need the goodwill and assistance of its most important neighbor and important trading partner.

Venezuelan Pres. Maduro may see electoral advantages in scapegoating Colombians, but he's not doing his nation any long-term favors.

Maduro's '21st-Century Socialism', which consists mostly of populist give-aways and economic controls, is based on denial of economic realities. Price controls and a command economy caused shortages and long lines in communist Eastern Europe. Now they're bringing the same results to Venezuela. Why should anybody be surprised?

It is true that, on a small scale, Venezuela's troubles are contributed to by Colombian (and Venezuelan) smugglers, who carry subsidized Venezuelan gasoline and foodstuffs across the border and cocaine the other way.

Guess what happens when something costs pennies on one side of a line and dollars on the other? That product gets shifted from the cheap side to the rich side, no matter what anybody tries to do. It's like water flowing downhill.

Venezuela has always been unsustainably dependent on oil income. But that independence has only increased during the years since Hugo Chavez was elected president, making the recent price plunge extremely devastating. The Venezuelan government has only made the situation worse by making gasoline free, hemorraging many billions of dollars annually with a subsidy which also harms the environment and goes disproportionalely to the wealthy.

Until Venezuela discovers economic reality its troubles will worsen. Sadly, that means that persecution of Colombians may only get worse.

The Importance of Barry Seal

Barry Seal, the legendary drug plane pilot, is back in the news, thanks to a film about him starring Tom Cruise, who is now in Colombia.

Seal certainly did have an exciting life. According to the Spartacus website, Seal smuggled arms to Fidel Castro's Cuban rebels and later to the forces trying to overthrow Castro; Seal flew in the Vietnam war and for decades worked for the CIA. Seal eventually discovered that he could make lots more money hauling illegal substances than passengers - some perhaps for the CIA. Some even link Seal to the John F. Kennedy assassination. Seal was caught smuggling quaaludes into Florida, indicted, and agreed to cooperate with U.S. authorities. In a plane equipped with hidden cameras, he picked up a load of cocaine in the Nicaragua ruled by the leftist Sandanistas, whom the Reagan administration considered a communist threat to the hemisphere.

The photos Seal brought back showed showing Medellin cartel leaders Pablo Escobar, Jorge Luis
Ochoa and others loading cocaine into a C-123 transport plane with the help of a Nicaraguan government official - great evidence for the Reagan administration of the Sandinistas' evil nature. Reagan released the photos to win support for the U.S.-financed Contra war against the Sandinistas.

Seal was murdered in Feb. 1986 by Medellin cartel hit men while serving probation in a Salvation Army halfway house in Baton Rouge Louisiana.

The U.S. Congress had prohibited aid to the Contras, who had committed severe human rights violations. In response, the Reagan administration cooked up the scheme known as Iran-Contra, in which the U.S. illegally funnelled money from arms sales to Iran to the Nicaraguan Contras. Many say the scheme was worse than Watergate, but Reagan's popularity and great media skills enabled him to save his presidency.

The Contra scheme was later dropped, and Sandinista leader Daniel Ortega was eventually elected president of Nicaragua, where he has shown himself to be a competent administrator but has restricted media rights and perpetuated himself in power. If Nicaraguan dictatorships of previous decades handed the nation's resources over to U.S. companies, Ortega seems to be giving them to the Chinese.

Seal may or may not have changed the America's history, but he was certainly a part of it.

Painted Into a Box

Recently, some city transit official with great faith in human nature decided that painting the intersection of Ave. Caracas and Calle 13, which suffers chronic, daily gridlock, would make the traffic chaos magically disappear.

Of course, drivers ignore it. Look at the results.

Has anybody thot of fining drivers who stop inside intersections? Thjs practice, which seems easy enough to discourage, costs Bogotanos immeasurable frustration and countless hours of lost time. 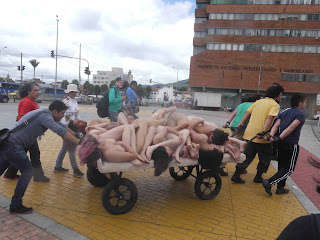 No, these are not victims of the Ashley Madison leak, but a piece of performance art by students from the Universidad de Antioquia and the Universidad Nacional. They pulled the cart of nudes from the university's campus all the way to Plaza Bolivar today. Lucky thing the weather was warm and not raining, but hope these folks invested in sun-screen.

The perfromance, named Carga Monton Colectivo 'El Cuerpo Habla', was a protest against racism, fascism, sexual violence and all sorts of other evil things.

The bodies represent death, a student accompanying the work told me, "but we Colombians are a very lively people." 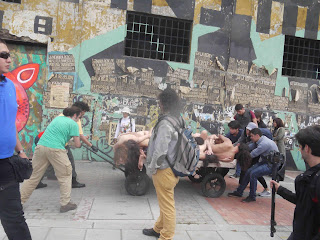 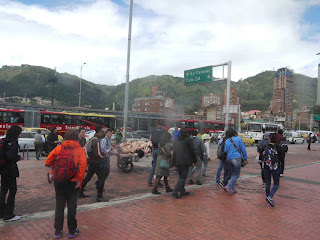 A group of Bogotá residents recently received a reply from the Secretaría del Ambiente to our list of questions about why they don't bother to enforce pollution laws.

Naturally, they're doing a great job. They even say so themselves. According to the Secretaría they carry out daily checks on polluting vehicles. Only trouble is, that none of us ever see them do it, and in my ten years in Bogotá I've never seen them stop a single one of those smoke belching buses in the center of Bogotá.


The Secretaría does measure air pollution, altho I suspect that their devices are high up, where the air's cleaner and far from where people actually breathe. But even according to their doubtful data, the city's average air pollution is in the 'moderate' range. That means that in highly polluted corridors like busy avenues, where many people spend a lot of their time, the pollution's terrible. And, according to the Secretaría's own data, the concentration of the tiniest, most dangerous. particles, is getting worse.
But the Secretaría doesn't seem to think that they could do anything better - for example by citing those chimeneas rodantes which we all see every single day, but which the Secretaría apparently does not.