On his way down Calle 26, Bieber stopped his caravan of armored SUVs, pulled out spray cans and painted graffitis onto the northern wall of an underpass near the Bogotá City Council building. While Bieber and several companions spray painted, the singer's four bodyguards and several police car escorts waited and watched. 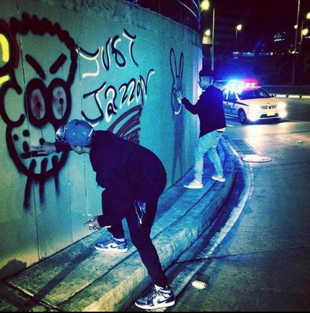 Bieber may be no Banksy, but his artwork drew attention when a CityTV van appeared and started filming. A police officer and a bodyguard approached the TV crew and ordered them, in English, to stop filming - which they refused to do. Bieber and company continued painting anyway.

Painting on public walls without a permit is a minor crime here, so it struck many as strange that the police protected Bieber while he did it. The family of Diego Becerra, a graffiti artist who was discovered painting a north Bogotá wall in 2011 and chased down and shot dead by police found the contrast unfair.

Becerro's father, Gustavo Trejos, called for "more fairness" and for graffiti artists to be respected and permitted to make their art.

"In this city there are continuous abuses," Trejos told El Tiempo. "They see (the grafiteros), they take them to the police station, they hit them and in extreme cases such as our son, they are assassinated."

A city official called Bieber's paintings "in bad taste and illegal," and said the city would have given him permission if he'd only requested it. But if Bieber returns to Bogotá, city officials said, he'll have to to public service work to pay for his crime.

But officials might not have approved of all of Bieber's images, which included a frog and what looks like a marijuana leaf.

By this afternoon, other grafiteros - who are apparently not Bielebers - had already erased and painted over Bieber's work.

This wasn't Bieber's only controversy in Bogotá. El Espectador reported that he later stopped at a Chapinero nightclub and that seven apparent prostitutes were seen getting into one of his SUVs. 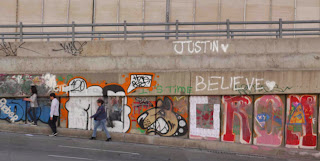 How much longer will Mayor Gustavo Petro govern Bogotá?

Petro's first challenge was a recall referendum. Petro first tried to stop the recall, then said he would not try to stop the vote from going forward, and then mounted a series of legal challenges, which look likely to create long delays for the vote. (But today Petro lost in two court challenges to the recall.)

Petro has battled the recall referendum despite the fact that it appears unlikely to succeed. Petro may not win a popularity contest, but his opponents will have a hard time fulfilling the voter participation requirement for a special election. By opposing the recall referendum, Petro also looks like a hypocrite, since he participated in the 1991 Constitutional Convention which wrote the right to a recall into Colombia's Constitution.

Petro also added a threatening note by saying that, if he is recalled, it could cause a response like the one which followed ex-dictator Gustavo Rojas Pinillas' controversial 1970 presidential election defeat. After official results gave a narrow victory to a conservative candidate, the supporters of Rojas Pinilla - then a populist, nationalist figure - cried fraud and founded the M-19 guerrillas, of whom Petro was a leader. Petro's comment is disturbing and worrisome coming from a man who supposedly abandoned the insurgency and decided to work within the democratic system.

But if mishandling city policies were a legitimate basis for removing a mayor, then few city halls would be staffed today. Rather, Petro should have to pay at the polls next year for the garbage problem. It's hard to ignore the fact that Ordoñez is an arch conservative who would undoubtedly sigh with relief if Petro, an ex-leader of the M-19 guerrilla group, were ousted from office.

Petro has until Nov.6 to respond to Ordoñez's charges against him.

Petro has alienated voters in other ways, with a controversial urban land-use plan and new tax liens for infrastructure projects. He's also created allies, including animal rights supporters, who appreciate his decision to stop bullfighting and bicyclists, who like the fact that part of Ave. Septima is closed to cars.

But Petro's suporters can't measure up to his powerful opponents. 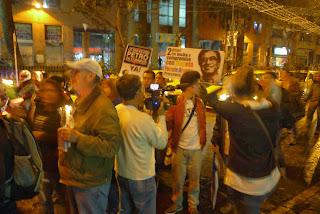 On the March Against Health Reform 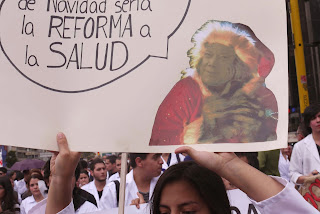 Some 1,500 doctors, nurses and medical students marched today against a proposed reform of Colombia's health system.

The contradiction is that nearly everybody agrees that Colombia's public health system is failing and that it does need reform. The question is how to reform it.

According to many observers, parts of the public health system are near bankruptcy. Patients complain that they are sometimes denied service. Some medicines are exorbitantly expensive. The Health Provider Businesses, known as EPSs, have received particular criticism.

In response, a government-backed bill now in Parliament would remake the whole system, creating a single fund, called Salud-Mia, to administer the whole system; set up a health plan named Mi-Plan to provide services and create 'Health Services Managers,' to accompany patients during their treatments.

To me, all this sounds like Big Government, for better or for worse. So, it's ironic that many of today's protesters denounced what they termed 'turning health care into a business.'

I can't pretend to understand the pluses and minuses of this reform, except to say that reform of some kind is needed. I will say, however, that, with all of its faults, Colombia's public health system is far ahead of the of the United States. 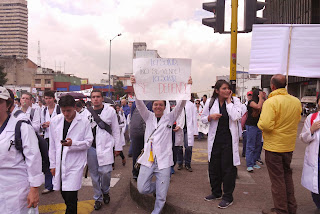 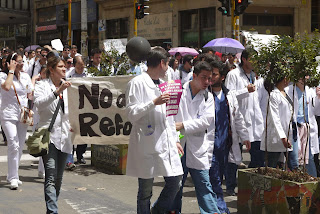 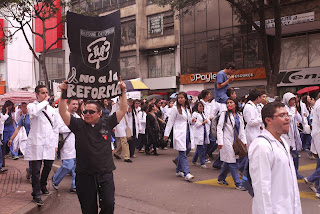 The always-active students of Bogotá's Universidad Nacional, known as La Nacho, turned their anger against drips today. Chanting 'No Más Goteros', or 'No More Drips', they marched onto the avenue beside campus and blocked traffic. Students and others have long complained that the university's buildings are delapidated and needing repair.

Yesterday, in fact, the law school's roof collapsed in the rain, prompting students to hold 'class' on the sidewalk in front of Ministry of Education. 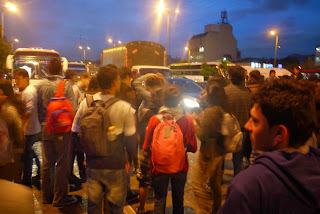 The Fall of an Idol?

It was a wonderful, inspiring life story: An AfroColombian child of Buenaventura, one of Colombia's poorest cities, overcame innumerable obstacles to become a star researcher and inventor in the United States, even working for NASA.

Unfortunately, the story seems to be untrue, or at least inflated.

Raul Cuero was the son of illiterate parents. From an early age he showed an interest in research, and his botany work moved a foreign visitor to help Cuero travel overseas to study. Today, at age 65, he teaches in a small United States agricultural university, works on inventions and does contract research. He's published research papers and has several U.S. patents to his name.

Cuero's life story is unquestionably impressive. But being good was evidently not good enough for him: he wanted to be great. And the Colombian media played along. Colombian newspapers, magazines and television celebrated Cuero as a great inventor and award-winning NASA researcher.

But Rodrigo Bernal, an ex-professor of agricultural engineering of the National University, decided to dig deeper into Cuero's story. It turned out, as Bernal wrote in a cover story in El Espectador, that Cuero's dozens of 'scientific papers' were mostly news reports about himself, that the NASA awards were rather routine recognitions and that Bernal had only two minor patents to his name. Bernal added many other details which Cuero appeared to have exaggerated or distorted to add to his own legend. Cuero has worked for NASA, for example, but only as a contractor.

One of Cuero's recent books even describes him as 'One of the world's most important scientists.'

In his response, Cuero did not directly deny Bernal's affirmations. 'I'm not an orthodox scientist," he wrote. "In essence, I'm an inventor...I'm an inventor and my purpose is to create things which serve humanity and create economic impact.'

Give Cuero credit for accepting the criticisms gracefully. In fact, Cuero is a very impressive guy. How many of us have even one invention or scientific article to our names? How many of us overcame a dirt-poor background and racial discrimination to become university professors and do work for NASA?

Cuero is rightly an inspiration for many poor youth. But he inflated his impressive life history into a legend, and paid the price when the exaggerations were inevitably uncovered. Sadly, those distortions will leave a lasting stain on his exceptional accomplishments.

When I attend an event like Bogotá's Environmental Fair, which ends tomorrow, all of my cynicism surges to the surface.

On the one hand, there's all the marketing of expensive stuff in small packages whose only environmental quality seems to be a sort of hippy, or new-agey image. And those idealistic 'eco-villages' generally located far from cities and dependent on polluting transportation. And the 'recycled' products, which look good at first glance, until you reflect that better than weaving a colorful handbag out of old plastic bags would have been not consuming those throw-away plastic bags in the first place. (And that the reusing of a tiny proportion of disposable plastic bags, bottles, etc, makes people feel better about consuming disposable stuff.)
But the fair did include positive things, altho you had to look around for them - and they often aren't even labeled 'environmental.'

I found some of the first solar energy set-ups I've seen in Bogotá. The guys of Ecossol said that solar photovoltaic panels don't pay for themselves in cloudy Bogotá, which gets only 3 to 4 hours per day of sunlight. But thermal panels, which heat water directly with the sun, are economically viable. Unfortunately, they haven't exactly caught on fire here. The guy said his company has installed in the city about 15 sets in the city.

Bogotá's thousands of bicitaxis, which shuttle people on short trips, mostly to and from TransMilenio stations, cary out a huge public service and also reduce congestion and pollution - but the city hasn't ever legalized them.

Several brand-new bicycle manufacturers displayed their work. Their trendy bikes are not likely to create a mass market in this mostly-poor city. However, by making cycling cool, perhaps they'll lure a few drivers out of their cars. Unfortunately, bicycle marketing can never match the marketing behind big, polluting vehicles.

One of the most elegant things I saw at the fair was this bottle of light, which consists simply of a bottle of water with a bit of bleach inserted into a house's ceiling to let in light and replace light bulbs during the day. Unlight a window, the bottle's light is diffuse and pleasant, its creators told me. 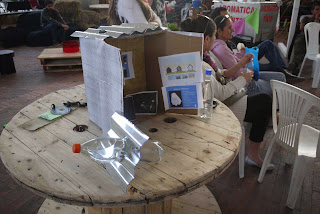 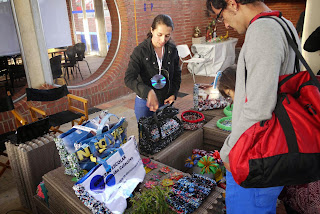 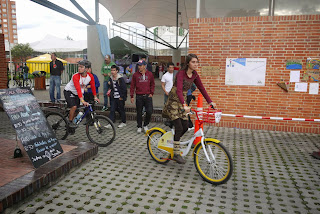 The fair ends Sunday, Oct. 27. It's being held in the Plaza de los Artesanos, near Parque Simon Bolivar.