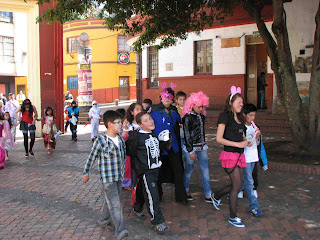 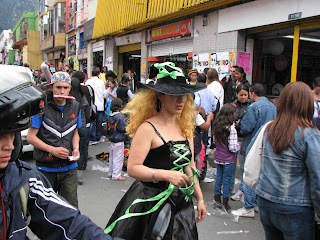 It was not long after I moved to Bogotá, into an older, crumbling house in the upper La Candelaria neighborhood. I was lying in bed one night when I heard a strange scratching noise on the outside of my door. I grabbed a piece of wood and went to investigate. Naturally, I found nothing there. Only later did I learn that the previous resident had died in that room - and that the neighboring street is called 'La Calle de los Fantasmas' - 'The Street of the Ghosts.'

Thanks to its age and the many bloody dramas it's experienced, it seems likely that there are ghosts anywhere, they're here in La Candelaria.


I also knew a tremendous old woman, Estela Monsalve, who did ghost tours thru the neighborhood. Short, wrinkled and stooped, but full of life, she had the spirit of a teenager. Once we went to a chicha bar in the Callejon del Embudo. 'Do you want to see my identification?' she asked the bartender. Apparently, Estela was a regular. Sadly, Stela died a few years ago, but after a full life. She was one of Colombia's first women lawyers. And, fortunately, her stories live on.


The Calle del Sol, on Carrera 3 and Calle 11, is today an expensive apartment building, but was once a monastery and, during the 1950s, '60s and '70s, the secret police headquarters. Undoubtedly, lots of terrible things happened here, particularly during the years of dictatorship in the mid-1950s. According to this paper, residents there still report sensing ghosts in the building. And the fancy restaurant on the buildings Calle 12 side, which occupies the space which was the dungeon, is called 'La Bruja', or 'The Witch.'

On Carrera 2 between Calles 10 and 11, in the 1800s there lived Jose Raimundo Russi, an attorney who represented thieves, prostitutes and other social outcasts. Finally, Russi himself was accused in involvement in crime, tried and executed. They say that his spirit is still seen in the neighborhood.

Around the corner, on Carrera 3 and Calle 10, some people say that clothing left dirty would be found the next day mysteriously washed and hung on the line. The phenomenon continued until one day while repairing a house workers found a woman's body buried in the wall. The woman was properly buried and to everybody's disappointment the ghostly washings ceased.

On Calle 13 and Carrera 5, it's said, there lived a woman who was pregnant, but single - a scandal in the 18th century. She gave birth and killed the child, whose spirit supposedly still haunts the neighborhood, grabbing unsuspecting women by their legs.

Supposedly, a ghost haunts the Gilberto Alzate foundation building on Calle 10 and Carrera 3, once the residence of the Virrey, the Spanish king's representative for the region. Today, it's said, employees sometimes hear a ghost wandering its halls.

It's a remarkable political saga for Petro, who first became a public figure as a leader of the M-19 guerrillas, most notorious for their 1985 attack on the Justice Palace building on Plaza Bolivar, which ended with the building in flames and about 100 people dead. Petro claims that he had no previous knowledge of the attack.

The M-19 soon after demobilized and turned into a political party, which eventually integrated into the leftist Polo Democratico. Petro became a respected congressman, willing to criticize the left, including Colombia's Marxist insurgents.

Petro's victory shows once again that Bogotá is the leftist capital of a conservative nation. That is why Petro, the only leftist candidate with strong name recognition, won even tho the left is in disarray, with titular Mayor Samuel Moreno, of the Polo Democratico Party, in prison on corruption chargees. Remarkably, the fact that Petro only recently left the Polo Democratico and was long associated with Moreno didn't seem to hurt him.

But, even tho the mayoralty of Bogotá is considered the nation's second-most important political office, because Colombia is still a conservative nation, Petro has few prospects of ever becoming president.

As a candidate, Petro made some unpopular (but necessary) proposals, such as addressing Bogotá's traffic jams by charging drivers a congestion tax. But he also made populist gestures, such as promising free water for the poor.

Let's hope that as mayor his pragmatic side wins out over his ideological one. As a politician who speaks his mind and whose prospects for higher office are in any case limited, perhaps Petro will be willing to make courageous, unpopular decisions in the mold of London Mayor 'Red' Ken Livingstone.

As for the losing candidates, David Luna, Carlos Galan and Aurelio Suarez polled poorly but likely have good prospects as fresh faces. Gina Parody finished third and but created a positive impression and will surely run again for mayor or even higher office. The big loser was ex-Mayor Enrique Peñalosa, who showed once again that, while he may be an excellent administrator and city planner, he's a lousy candidate. Peñalosa will now resume his career as public speaker and consultant on urban issues.

As for the significance of Petro's victory, it's yet another condemnation of the FARC guerrillas' futile, murderous, drug-financed war to overthrow the Colombian state. Setting aside all the suffering the guerrillas' have caused and the futility of their battle, Petro's victory shows that Colombia's democratic system provides a path for people of all political stripes to achieve power.

A Tempest in Tayrona

The polemic over a proposed luxury hotel in Tayrona National Park, near Santa Marta, is a telling episode about environmental priorities and voluntary blindness.

After a media storm, which revealed the fact that several of the presidents' relatives were involved in the deal, the enviroment minister announced that the hotel was 'dead.'

But while the concerns are legitimate, it's also true that the hotel would generate income for local indigenous people and that the park already contains camping areas, private property and cabins, hotels and something called 'eco-habs' for tourists - not all of them ecologically ideal. What's more, illegal farmers have invaded parts of the park and the area is used by narcotraffickers for their exports. And rich tourists might include philanthropists and environmental activists who could protect the area's culture and biodiversity. It's sad but it's true that a Bill Gates or Ted Turner has a much easier time getting the attention of media and high officials than do indigenous leaders.

More fundamentally, the debate over this famed park, which extends from the coast into the mountains, distracts from Colombia's broader and much more serious environmental problems. Global warming is melting away the country's glaciers and has brought an epidemic which is wiping out the country's amphibians. Researchers recently reported that the fish stocks off of Colombia's Pacific Coast are near collapse (and that was before illegal fishing boats slaughtered thousands of sharks for their fins in the area). And every year Colombia loses an area of forest ten times the area of Tayrona Park to agricultural expansion, illegal drug crops and expanding urbanization.

El Tiempo reports that 70% of Tayrona Park is claimed by private 'owners.' At least the polemic over the luxury hotel drew attention to the park's troubles, anyway.

The Mercado de la Concordia Gets its Day

The Mercado de la Concordia, in the La Candelaria neighborhood, is usually a sleepy place. But these days it's come alive with an art festival, complete with sculpture, music, murals and poetry. The event began Oct. 28 and lasts until Nov. 2.

The Concordia market is a venerable institution. About a century old, a long-time resident says it used to be as big and busy as Palo Quemao is today. But then supermarkets moved in and the city's distribution patterns shifted west. Today, in normal times, the market contains a few general goods shops, some handicrafts stores, a small eatery and a fruit stand. The building is also shared by the informal and innovative Teatro de Sueños (Theatre of Dreams) whose performances and drum circles often revertebrate thru the building and into the street.

What the market lacks in financial flow, it makes up in tradition and local flavor. Several of the vendors inherited their spots from their parents. And the market serves as a hang-out for locals, who pass the day downing beers and telling tales. 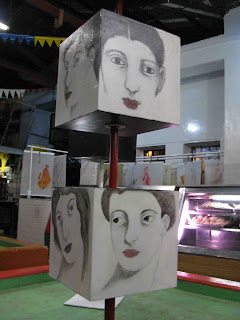 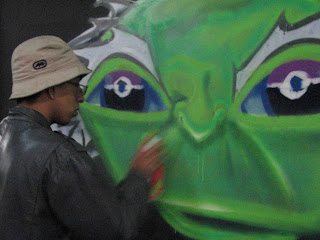 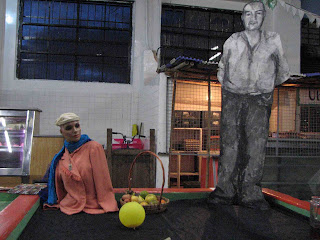 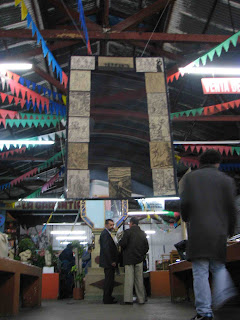 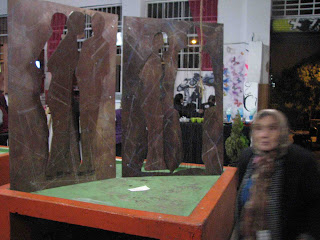 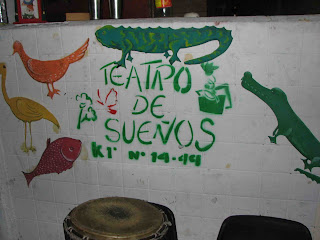 Funeral for the Public Universities 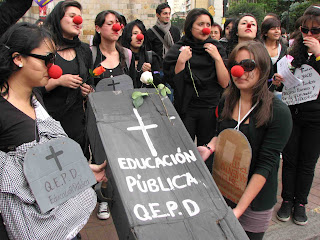 Students protesting proposed reforms for Colombia's public university system held this novel and lively 'funeral' for the universities in front of the 400-year-old San Francisco Church in central Bogota. 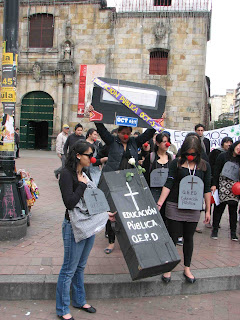 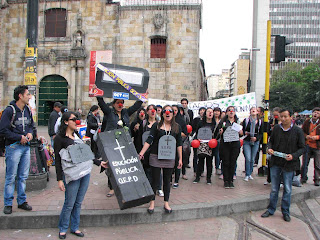 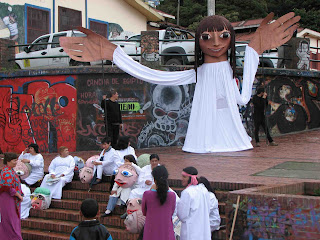 La Casa de Ursula, or Ursula's House, an organization which promotes women's rights and wellbeing in conflict, performed this haunting theatre/protest/memorial in La Candelaria today. The House isn't a real physical building, and from what I could gather appears to be a Catholic organization in the tradition of Liberation Theology.

The event included a memorial for the victims of the False Positives killings. 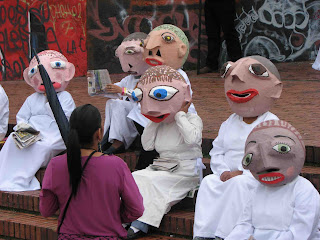 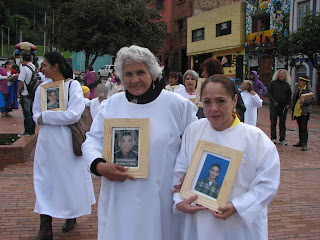 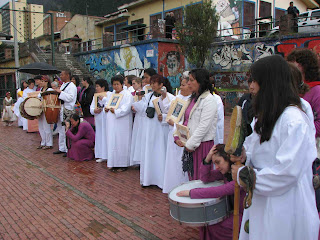 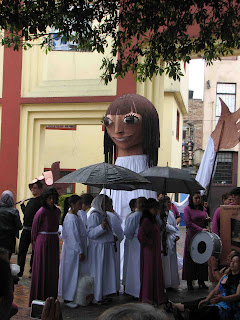 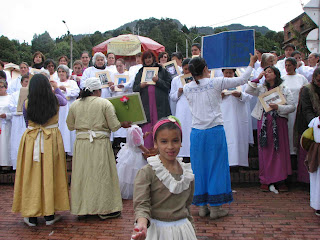