With the election in the final stretch (first round voting is Sunday, the 30th), it looks clear that there'll be a second round between Juan Manuel Santos and Antanas Mockus. For those who don't follow Colombian politics, Santos was Pres. Alvaro Uribe's defense minister and once considered a shoo-in to be the next pres. But Mockus, an ex-Bogotá mayor, has come from nowhere to make the election a real race.
Guys like these call Mockus just too wierd to vote for. The guy got married on an elephant, after all. 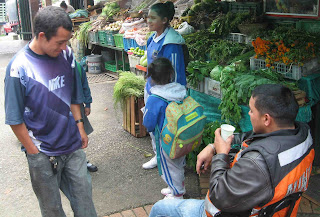 Santos is the conservative, who will most likely continue Uribe's aggressive war against the guerrillas and neoliberal economics. 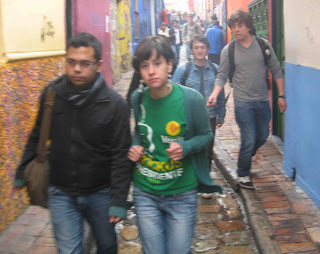 Mockus, popular among the young, urban and educated, was a centrist mayor, but many of his policies on a national level are question marks. He has said, however, that he'll continue many of Uribe's policies, except for trying to normalize relations with Venezuela. Mockus is considered intelligent and not corrupt, but he's eccentric.

In recent days, Mockus has, courageously, said that he'll raise taxes on the wealthy if elected - something else which confirms him as the 'Colombian Obama.' Santos rejected that - even though his political patron Uribe has done exactly that.

Mockus also said that he'll normalize relations with Chavez's Venezuela. The leftist Chavez has made many threats against Colombia, even talking war. There's also lots of evidence that Chavez has supported Colombia's leftist guerrillas.

Unfortunately, the environment has received little attention in this campaign, despite Colombia's huge environmental problems, including deforestation and urban air pollution. In one debate, the candidates did discuss the issue of drug-field fumigation, which causes huge environmental impacts by driving campesinos to chop down forest for drug crops. Several of the candidates did criticize the policy - but (from my reading) none cited environmental reasons. And, Mockus being the Green Party candidate, that's a real disappointment. He took a vague stand on fumigation - to continue, but study it. Santos vowed to continue the policy. Only some of the leftist candidates, who have no chance, said they'd change the policy. Perhaps more emphasis on relieving poverty will mean that fewer campesinos will turn to planting drug crops.

Colombia's tremendous human rights crisis - which seem to be getting worse, even as the economy grows and the country attracts more tourists - haven't gotten a whole lot of attention. In the final debate, Petro said the government needs to support the nation's displaced, but Santos pointed out that this is financially impossible.
Publicado por Miguel en 7:03 PM