Bogotá, how are we doing? 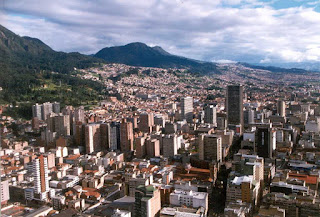 Bogotá Como Vamos does an important service by providing solid numbers about important issues such as pollution, traffic congestion, cost of living, recreation areas and other things which strongly affect quality of life. On their website, I just discovered the shocking information that Bogotá's diesel vehicles apparently are not required to use filters - or at least that no legal standards control such filters.
Recently, the city government issued a study evaluating Bogotá's competitiveness and quality of life. One thing which really struck me about the latest report, as published in El Tiempo, was Bogotá's low ranking on parks area per inhabitant. The creation of new public parks has been a major goal of recent mayors, and evidently it is needed, since even now Bogotá ranks below even cities like Hong Kong and Singapore which are not known as terribly green.
Another worrying factor is the city's high pollution. In particles smaller than 10 microns in diameter, Bogotá's air has a concentration almost three times that of London. Perhaps some diesel filters would help. Or phasing out old vehicles. Or prohibiting the burning of coal - that's right, coal -
in urban factories.
Similarly, only 28 % of the city's sewage is treated, as anybody who's smelled the Bogotá River has noticed. We've heard many promises from environmental authorities about cleaning up the water, but little progress.
The survey also found low educational levels - not surprising for a developing world city. Even more dramatic, I suspect, would be the percentage of people with higher educations who are toiling away in sales jobs, driving taxis or selling trinkets on the street.
At least one statistic suggests Bogotá still has time to save itself from one of the worst ills of urban life. Of the cities surveyed, Bogotá had the highest proportion of users of public transit. That means potential for long-term transit sustainability. But, with 100,000 new cars entering the city annually, and the rate likely to accelerate, Bogotá appears headed toward suffocation by car fumes unless city policies take this seriously soon.