The Wrong Route on Public Bikes?

The conclusion? Washington is a much, much, richer city and Washingtonians have lots more spending power.

Washington also receives many more tourists than does Colombia's capital and has better streets and less crime.

So, now guess which of these two capital cities is subsidizing its public bikes program, and which one expects those bikes to pay a profit to the city?

If the answer made any sense, then I of course wouldn't be writing this commentary.

Last week, Bogotá finally chose a company to operate Bogotá's planned public bicycles program. Cycling advocates should be celebrating, and would be, if the scheme didn't have all the signs of disaster.

The Colombo-Chinese consortium, Bicibogotá, consists of a garbage collecting company and a home appliance company, neither with any experience in bicycles. And it's Colombian owner has a history of corruption and other scandals.

But those difficulties are minor compared to the fatal flaw in the city city's approach to creating a long-awaited public bikes program. Other cities see their public bike systems as public services which improve health and reduce air pollution and traffic congestion and subsidize them. But Bogotá expects its public bikes to pay the city profits.

Washington D.C. subsidizes its Capital Bikeshare program, as does Vancouver, Canada; Melbourne, Australia; and the U.S. cities of New York; Chicago; Minneapolis; and Chattanooga, Tenn. Toronto, Canada, Toronto, Canada decided not to subsidize its own bikesharing program. But, despite being a much wealthier city than Bogotá, its program was struggling as of 2013. Even mega-wealthy New York's Citi Bike program will be in crisis if sponsor Citibank pulls out.

And the numbers get even worse from there, as this graphic from the Washington Post shows. 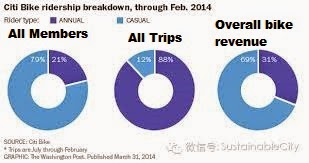 Bogotá, besides being a much poorer city than Washington D.C., also receives far fewer tourists, meaning that its revenues will be far lower.

Is this contract only Mayor Petro's desperate effort to create a legacy, at whatever cost? Does anybody believe that public bikes can work in Bogotá without a subsidy? Why launch a program doomed to failure, which will only leave a black mark on cycling here?

Instead, Bogotá should take the route of almost every other city and see bicycling as a public benefit, which cleans the air, reduces traffic jams and improves people's health, and subsidize cycling.

This is particularly true, after all, since dirty transport receives, albeit often invisible, subsidies.

I agree that it is unlikely that this project will be successful, though mostly because public-private partnerships are often failures, particularly where corruption is rampant. However, in the spirit of debate, here are some counterpoints to your arguments against the economics of the idea and the ability to attract annual users:

First, while it's true that per-capita incomes are higher in the North American cities, operating costs here will be much lower. I would expect the hourly cost of the employees in New York are at probably well over $20 with employment taxes and benfits , while here they will be less than 10% of that. I would also imagine that insurance costs will be very different. Therefore, relative to income, pricing here could be the same or lower.

Second, younger people are more likely to be users than older. Of course, the population here skews much younger than in North America.

Third, the weather is more conducive. In most of the cities that you listed, there are many months of the year where it is just too cold or hot for the average user to bike. Bogota is about as good as it gets for year-round riding.

Fourth, I think that for more people here a rental bike is a more desirable form of transportation than the available alternatives.

For what it's worth, the Citibike program seems to be aimed more at tourists. Take a look at their map of the stations - almost are in the tourist areas of Manhattan, and few are located in heavily residential neighborhoods.

I would have to agree with Mike, that this is another wrong headed answer to the problem of bike transportation in Bogota. Bikes for the people and the enviroment and not for profit.

Thanks for your comments, but I think the points you make might change the economics, but only around the edges.

Sure, labor and land costs are lower here (but I'm not sure about insurance, given Bogotá's crime levels), but, since the bikes, computers, software, etc will be imported, they'll cost about the same.

As for population age, I suspect that New York has lots of young people. It's a pretty hip city, after all. And environmental and health ethos there must be much stronger.

As for the weather, I'm not sure. Sure, there's no snow here, but it does rain a lot.

If it's true that Citibike is aimed at tourists, then that would seem to make my point: they focus on tourists to finance the system. That won't be viable in Bogotá.

You say, "Bikes for the people and environment and not profit." I hear, "I want free stuff that other people pay for."

As for the notion that biking is not subsidized, that is just not true. What do bikes need just as much as cars? Roads. How much do bikers pay for roads? Nothing. And I'm fine with that. It's a social contract that has existed for many years and I can live with it. I'm even OK with the occasional event where the roads are blocked for bikes. But as a private vehicle owner I pay my fair share for roads. In my case, almost COP 2 million annually, 80% of which goes to the department and 20% to my municipality for road maintenance. That comes out to COP 200 for each kilometer I drive my Chevy. And, contrary to previous assertions that you have made, gasoline is not heavily subsidized here. I pay much more for gas here than it costs in the USA. On top of that, there are huge excise taxes on cars and car parts that are not going to go away with the free trade agreement.

Look, the real reason that this idea will not work is that bikes will always be on the margins as a form of transportation. Their use is limited to able people who don't live too far from where they need to go, don't have to transport youngsters or elderly, don't need to carry a lot of stuff, can risk getting caught in the rain and do not have to worry too much about their personal security along their route.

I understand that gasoline is still subsidized on one level, atho it is also taxed.

But so many of the costs imposed by the private car don't enter on any ledger. For example, the huge daily traffic jams, which steal countless hours, from both car-owners and non-car owners. The other day, I was observing an ambulance, siren screaming, trapped in a traffic jam on 26th St., and I wondered whether the patient was dying inside. And then there's the noise and pollution, which are compounded by those traffic jams.

Bicycles do receive some subsidies. But their impact on the city is so relatively tiny and their benefits relatively large, that subsidizing them makes sense.

Unfortunately, I mostly agree with your analysis about cycling always being a marginal transport mode in Bogota - but not completely. Older people can also cycle, and many do, particularly in Europe. And, bike schemes are designed to integrate with other transit, so they would also serve people traveling long distances.

Question Number 8 to the mayoral candidates: Will the 6 year concession contract for a public bike system continue as planned or will the coverage be extended?

Please sign if you want to the candidates to answer this and other 14 bicycle related questions: