Take a look at the drama going on on Calle 24, behind the Central Cemetery, to get a feel for the absurdity - or nonexistence - of Bogotá's solid waste policy. 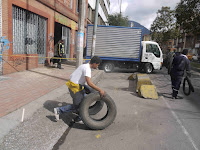 One by one, city workers are dropping old tires from windows or rolling them out of doors, then loading them into trucks to drive them an our outside the city...where they'll be dumped into a 'tire cemetery.' And they'll be at it for a good deal longer, judging from the piles of tires remaining inside the buildings.

The fate of used tires has been an ongoing crisis in Bogotá, especially since about a year ago, when an illegal tire dump caught fire, spewing toxic smoke which turned the city's air grey for days. City leaders vowed to take action...and held a series of meetings with tire industry representatives, which have come to nothing.

Of course the meetings came to nothing. The tire industry doesn't want to bother itself with the cost and trouble of the disposal of its products. And god forbid that the city would force them to. After all, that might create a precedent and make the producers of styrofoam containers, plastic bottles, cigarrettes, plastic bags and the innumerable other products which litter our streets, clog rivers and fill landfills fear that they too might have to take responsibility for the impacts of their products.

No need to observe that other cities have confronted these problems with deposit systems. But Mayor Petro persists with his fantasy that a p.r. campaign accomplish the same here. (Perhaps Petro doesn't want to offend the industrial interests which he hopes will support his campaign for president. God forbid.)

In fact, the tires were dumped into these vacant buildings by the city's UAESP, which is supposed to handle recycling, and whose slogan is 'Basura Cero' but should be 'Basura Maxima.' Now, these tires will sit in a dump where they might catch fire. And the tire avalanche continues, with no solution.