The park was envisioned for 2010, the bicentennial of Colombia's founding. However, design changes and a lawsuit by neighbors delayed the project until this year - when Colombia is 207 years old.

The concept of a public space above Calle 26 connecting Independence Park and to the Museum of Modern Art was originated by famed Colombian architect Rogelio Salmona, who died in 2008. The new park is supposed to right a historic wrong: Parque de la Independencia, created in 2010 to host the World's Fair, has suffered repeated amputations as avenues slashed thru its western and southern sides. Ironically, the new Parque Bicentenario took yet another bite out of Independence Park because its elevation required the construction of access ramps and stairways on its northern side. Building those meant eliminating
grassy space and cutting down several trees, and prompted an unsuccesful lawsuit by residents of the Torres del Parque on Independence Park's other side. The new park's great cost also made me wonder whether the couldn't have better spent the money creating a conventional park in some other, disadvantaged part of the city.

But that's all in the past. Parque Bicentenario is now finished, and the city has created a pleasant area for relaxing, reading, and perhaps small concerts or theatre events. It's an area of stairways and winding paths bordered by small gardens. When I visited on Monday afternoon, the Bicentenario was active with couples and families sitting, tossing balls around and taking photos, while security guards warned people not to stand on the benches. But the popularity may just be novelty. I'm not sure what will draw people here, except the promise of a quiet spot to walk or sit and read or kiss. But you can find those same things a few meters away in Parque de la Independencia, wher you can also lie on the grass and let your dog run around.

I also wondered why the designers included so many stairways where wheelchair-friendlier ramps would have worked just as well (perhaps to discourage skateboarding and bicycle riding). And what will happen during rainstorms, when torrents of water will flow down into Parque de la Independencia, turning its grass into muddy pits. And Bicentenario's paucity of trash cans also seems strainge. Sure, it's best to pack out what you pack in, but that's not Colombian culture. Hope not to see this park littered with pop cans and cigarrette butts.

In a few months, will this new park be forgotten by most Bogotanos and taken over by potheads, beggars and skateboarders? Let's hope that city officials remember to fund activities here to keep this an active place.

*For anybody who doesn't follow New York urban developments, the High Line is popular new park their built on top of an old, raised trolley line. 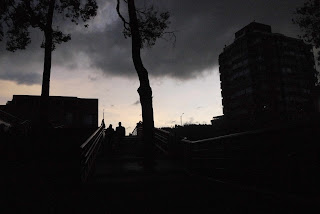 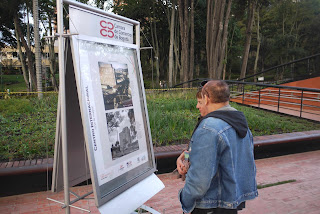 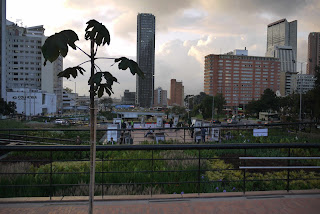 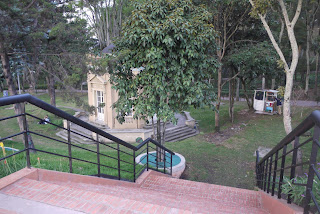