What Can We Expect from the Pope?

Even before Pope Francis's arrival, we can thank him for the cease-fire agreement with the ELN guerrillas, who (in contrast with the FARC) have long ties with the church: They once even had a
priest as a leader. A bit paradoxically, however, during his visit the pope is to beatify a Colombian bishop assassinated by the ELN in 1989.

But more substantial changes seem unlikely - despite all the anticipation and commercialization.

Francis will visit a Colombia whose Catholicism is declining, both in terms of the number of faithful and in terms of the church's influence. Altho about 79% of Colombians still identify as Catholics - one of the highest percentages in the region - a much smaller number appear to attend church. And evangelical churches are growing rapidly, particularly among the poor, as they are across the region. The Catholic Church has also lost its central role as an institution. The 1991 Constitution transformed Colombia from an officially Catholic to a secular nation. And during the recent, and successful, peace negotiations with the FARC guerrillas, the church did not play the role as mediator it had in earlier talks.

At the same time, Francis will also encounter extremely conservative Catholics, led by ex-attorney general Alejandro Ordoñez, who reject not only those liberal legal changes, but also Vatican II.

José Galat, the conservative rector of Gran Colombia University, has even called Pope Francis a 'heretic' and claims that Francis 'is paving the way for the anti-Christ.' Colombian church officials have told believers not to watch the university's television channel, TeleAmiga. 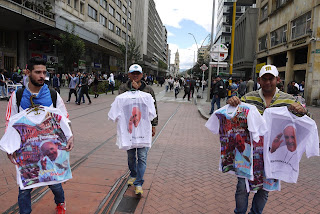 Same-sex 'marriage' (which marriage can never be as it will always be between one man and one woman), murdering babies, or euthanasia is not permissible in any Catholic strain of thought. Catholicism is not to great a heaven on earth but to save the individuals soul. All sins are redeemable. I also find it amusing how foreigners seek to colonise countries and cultures with their own proven decadent views. It is failing right now as we speak in our homelands. Why on earth would seek to impose it on these gullible but goodhearted people also? The culture has failed just as socialism has failed countless times before. Yet we have a defect in our psyche that compels us to give it just one more go despite the immense human suffering it will cause.

In what sense has culture failed in Europe, the U.S., Canada, etc, which do permit same-sex marriage, abortion and in some cases euthenasia?

Those nations are generally wealthier, less violent and have higher standards of living than Latin American nations, which mostly prohibit those malign influences you list.

Astonishing, so happy I cannot be considered a so-called progressive. You actually believe that degrading the standing of marriage as a positive when you apply the same logic you can refine it to mean nothing. There is absolutely nothing about abortion that holds any positive connotations or benefits it's shocking that you would even try to pass this off as some kind of sick positive. As for euthanasia, I do not endorse the killing of anyone and could never agree to the state making us all culpable in the killing of another innocent person. For your final point, there is no nation that has been enriched by any of the three aspects that you cited as being of some kind of benefit. We are seeing a new colonisation of the Americas with this sick decadent failure of a civilisation that is eating itself from the inside out. I only guess gullible Colombians are going to subject themselves willingly to it while SJW rub their hands with glee and self-righteousness. My message to victims is not to fall for it. Family, life and God are worth more than smoke and mirrors.

A woman ending an unwanted pregnancy which might endanger her health and would produce an unloved, unwanted child, is not a positive for her?

Is ending a life always bad, even when life is all suffering?