Not Ready for the Rain

You'd think that's the city the engineers who designed Bogotá's streets had in mind when they included these huge depressions at major intersections, creating lakes during every heavy rain.

Except that it does rain in Bogotá, and I don't suppose that anybody wanted streets to turn into lagoons. Instead, one suspects that an unethical contractor ripped off the city and citizens by using inadquate fill under the roads.

Who's gonna sue those contractors? The same city which approved their lousy work? 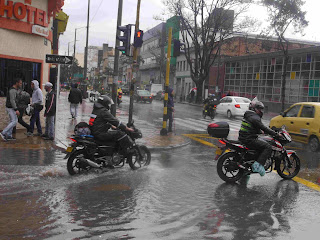