Scientology in the Armed Forces?

Revelations that the Church of Scientology, whose history is filled with bizarre beliefs and accusations of cultism and abuses, has worked closely with Colombian military personell have generated justified concerns.

There are many people - including some Hollywood celebrities - who are dedicated followers of Scientology, and appear to believe that they have obtained great benefits from it.

But the belief system - does it deserve the respect of being labeled a 'religion'? - includes some truly bizarre ideas about faraway planets and ancient volcanoes filled with hydrogen bombs and has been repeatedly accused of abusing its followers and engaging in exploitative cultlike behaviors.

That's why it's worrisome when such an organization has an institutional influence over members of an armed forces. In case of conflict, where would these soldiers loyalties lie? Whose orders would they obey? What sort of values would they apply?

In particular, it's frightening and contradictory for an organization accused of imprisoning members
and forcing women to have abortions to be allowed to teach human rights to Colombian troops.

And Scientology's grandiose, even bizarre, claims about itself just make one shake one's head and wonder whether the organization has its head on straight. A 2015 Scientology press release about the inauguration of its new Bogotá building boasted about the legal and military high officials attending the ceremony, and called the event 'one of the greatest things ever to happen to Colombia.' Scientology has even credited itself with slashing Colombia's crime rate, boosting its tourism and reducing human rights violations. 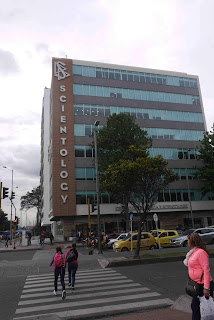 That said, Scientology is clearly on the offensive in Colombia, with its expensive new headquarters in the city's north.

Interfering with others' religious beliefs is always sensitive. But when it comes to Scientology, both the government and potential followers should exercise lots of caution.