Bogotá's red light district, known formally as the 'Tolerance Zone,' is sleazy, down-market and, late at night, dangerous. But the place is honest, and, hopefully, the world's oldest profession is practiced here more safely and with less exploitation than it would be if it were prohibited. Tragically, there are also children who prostitute themselves around here, often to support drug habits. Here's a news report about a police sweep which detained five underage girls working as prostitutes in the Santa Fe neighborhood.

Bogotá has several other designated tolerance zones, where prostitution is legal. But in no others are the prostitutes permitted to work the streets - as they do quite flagrantly here. The Santa Fe neighborhood is even informally divided between female sex workers and a smaller number of transvestites, each group with its own area. In a recent decision, the city decided not to legalize expanded street prostitution, pending more evaluations of Santa Fe's situation, and to try to tone down exhibitionism there.

In Bogotá, lots of illegal prostitution also goes on outside of the designated areas. High class prostitutes are callede 'pre-pagos,' because they charge in advance by credit card. Don Juan magazine recently did a story about the city's prostitution. Colin Post chronicles his adventures in some of these establishments on his blog. 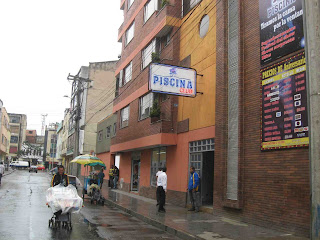 La Piscina (The Swimming Pool), a famed brothel.
El Castillo's building has been designated as having 'architectural patrimony,' which is probably the main draw for clients


Selling Sex: Colin's Career in Bogotá's Brothel Trade
A Profession Like Any Other?

Not Such a Glamorous Profession
This blog written by Mike Ceaser, of Bogotá Bike Tours
Publicado por Miguel en 7:36 PM

Dear Mike Ceaser: I need to contact you. I need to know if you can provide me information on a specific "cabin video x" which is inside a mall in Santa Fe, Bogotá. I will send to you some pictures of x-cab so you to recognize that through its investigative journalism. My email is lolymonart@gmail.com. Thank you for your cooperation.

I am writing to ask about using a photograph of you to illustrate our webpage http://www.debananenrepubliek.com

De BananenRepubliek is a website that shows people how to use creative ways of using new digital media. And allows new talent to showcase their work or ideas.

There is a photograph of yours that we would like to upload and use as a background image.

Would you be willing to give me permission to do so? I will, of course, include any credit or copyright notice that you require.

I can also post links to your homepage, blog, interviews and articles, if you'd like.
Thank you for your time!

Link to the specific image:

Good pics. I've been to Santa Fe several times but I always forget my camera :)

Hola Mike: Como esta usted? Remember me? I am hoping to return to Bogota soon. Please email me and send to me yhour phone number. If I make it within the next month I will contact you.
su amigo, Stephen Flanagan Jackson
(search google)
sfjackson10@gmail.com

I will stay for 3 days in Bogota and would like to visit a brothel or to book an escort. i don't speak good spanish.
Can you maybe help me and let me know where I can find a place which can be arrived safe?

Sorry, Hunter, but I don't know and wouldn't deal with that, in any case. Unfortunately for you, Colin Post is no longer doing business.

Patos al Agua is/was an art collective that works with children from Santa Fe (the district inside where the 'red' one is located), especially those attending a near by public dining hall. You can find more about the project here: patosalagua.wordpress.com

Thanks for the informacion. I hadn't heard of Patos al Agua, and wonder whether they're still active.

I will be in Bogota October 11th - 18th. I'm looking for a good escort agency. Any recommendations?

Sorry, Ryan, but I don't know anything about escort agencies, nor would I give such referrals if I did.

Dear Ryan, If you are still looking for best escort agency then i suggest lacelestina. This is one of the best Prepagos escot agency in colombia.