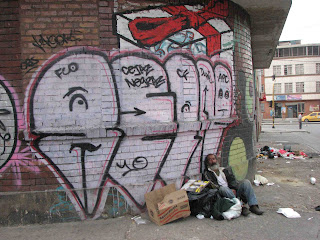 Today, Santa Fe is one of the man slum areas in central Bogotá. But Santa Fe has special claim to notoriety as the site of the city's main red light district, or Tolerance Zone, giving the area a reputation for vice and degeneracy. A half-century ago, however, the neighborhood was wealthy - and then the wealthy moved further north, to the Teusaquillo and then the Usaquen neighborhoods. 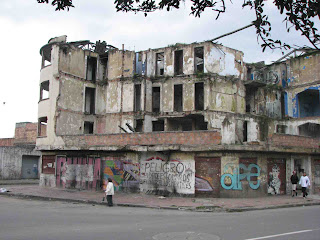 Several years ago, leftist university students working with a guerrilla group were building a bomb in this apartment building when it exploded by accident, killing them, the neighbors and a woman walking past. The government has a policy of rebuilding things destroyed by terrorism. But when they discovered that the building had been bought with drug money, they left it as it is. Nobody else has bothered to repair it, either.
By Mike Ceaser, of Bogotá Bike Tours.
Publicado por Miguel en 7:13 PM