Tribute to a Dictator

The other day, these women dressed up Colombian dictator Gustavo Rojas Pinilla's tomb in Bogotá's Central Cemetery to commemorate the anniversary of his Jan. 17, 1975 death.

Rojas' five-year reign from 1953 to '57 was Colombia's last all-out dictatorship, although several authoritarian but democratically-elected governments have followed. 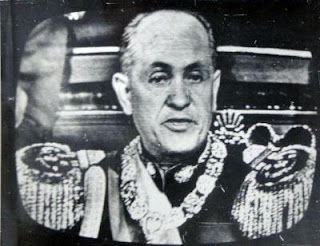 Rojas played a contradictory and paradoxical role in Colombian history. A hero from the war against Peru, his dictatorship is remembered quite positively, including naturally by these women, who talked about Rojas' public works projects but dismissed my suggestion that Rojas' government had violated human rights. Of course, context also counts. Rojas took command with a coup amidst a near civil war called La Violencia between the Liberal and Conservative political parties.

Rojas managed to stabilize the country, built great public works projects and gave women the vote, for which he is remembered positively. However, during his government the seeds were planted for Colombia's ongoing guerrilla insurrection.

I had to search hard to find mention of the Rojas dictatorship's dark side: discrimination against non-Catholics, shuttering of newspapers, repression of the country's traditional labor unions, massacres of university students and even of bullfighting fans who had booed his daughter.

After being forced from power in 1957, Rojas fled Colombia - to either Spain or the Dominican Republic, historians aren't certain. But he returned, converted into a leftist populist, and ran for president in 1970. The official results gave Rojas' conservative opponent, Misael Pastrana Borrero, a narrow victory, but Rojas' supporters claimed fraud.

Those fraud claims gave rise to the M-19 guerrillas, who would play a prominent role in Colombia from the 1970s through the '90s.

Thanks for your comment, but I disagree. Rojas seized power without an election, altho he did get himself voted for later. Rojas may have done some positive things during his government, but that doesn't make him a democrat.