Building Their Future With Their Own Hands

Students at the Bogotá campus of the National University have been staging protests for weeks demanding more spaces for clinical postings in hospitals. Today, they built their own hospital out of cardboard on the university's Plaza del Ché. 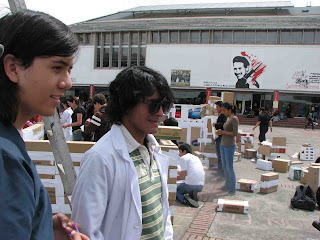 The National University, known as 'La Nacho,' is Colombia's largest public university and known for its political activism and colorful graffiti - always leftist.

The medical students complain that there there simply too few places in hospitals for them to do internships in order to become licensed doctors. Part of the problem, they said, is that the hospitals favor students from private universities because they pay for the places.

On top of that, the students said, the spaces which do exist are scattered amongst many Bogotá hospitals. Instead, they'd like to have a single university hospital where the students could do their rotations.

Personally, tho, I wonder whether it isn't better for the students to be separated, so that they obtain a variety of experience, in public and private hospitals, with patients who are poor and wealthy and from both the city and the countryside. 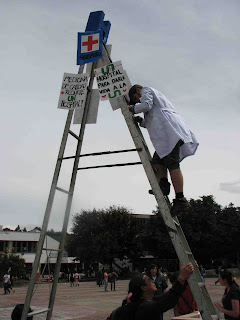 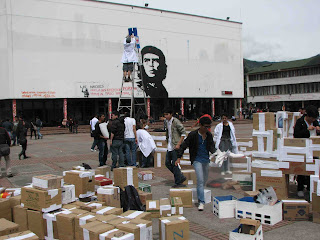