When Will TM Roll Down Decima?¡

When then-Mayor Samuel Moreno started the TransMilenio work on Carrera 10 and Calle 26, the red buses were supposed to be rolling in 2010. Today, the 26th St. line is functioning partially, but Carrera 10 is still vacant, its TM lanes serving as broad bike lanes but little more. The stations are mostly finished, but probably suffering vandalism, as those on 26th did.

The trouble, say planners, is that the Museo Nacional transfer station is far from finished, leaving the TM buses with no way to turn around at the north end of their runs. But the station isn't expected to be finished until early next year - a long time to wait amidst the avenue's chaos, congestion and pollution.

It sure seems that there must be a way, even if it means renting a private parking lot, to allow the TM buses to turn around and get the Decima corridor working this year. 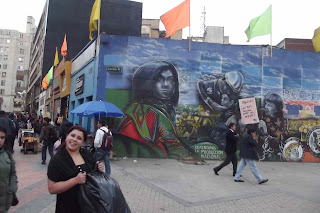