His popularity at 20%, his nation's economy in collapse, and his democratic credentials increasingly questioned, Venezuelan Pres. Nicolas Maduro is fighting back - against the Colombian media.

"I reject the campaign of manipulation, lies and hate in Colombia against Venezuela, Nicolas Maduro, against Hugo Chavez and the Bolivarian Revolution," Maduro thundered over a national 'cadena' (chain), when all Venezuelan radio and television stations are required to carry his speeches.

Whether Vladdo's portrayal is accurate or not - and it sure seems true that Venezuelan shelves are empty and its people discouraged - the context is revealing. Maduro attacked Colombian media by enslaving (literally 'chaining) a Venezuelan media which has already been tamed by official threats, intimidation and lawsuits.

Over the past several years, the Venezuelan government has progressively taken away broadcasting licenses and bought out critical broadcasters and newspapers. Surviving independent papers struggle to obtain paper to print on. And the famed opposition opinion paper Tal Cual, run by old leftist Teodoro Petkoff, it switching from being a daily to a weekly under the burden of government lawsuits, lack of advertising and lack of newsprint.

So it's not surprising that Maduro, used to a pliant and passive media back home, would object to a critical one next door. 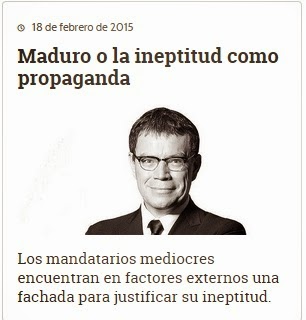 At the same time, of course, everything Colombian provides Maduro with a convenient target to attack. In that respect, Maduro's use of the term 'Santanderean oligarchy' is also telling. Maduro was referring to Colombian revolutionary hero and president Francisco de Paula Santander, who broke with Simon Bolivar after independence and is famous for telling Colombians that 'Weapons have given you independence, but laws will give you liberty.' In contrast to Santander, after independence Bolivar wanted to discard the Constitution and make himself lifetime president - much as the Chavez-Maduro dynasty, whch has ruled for 16 years, has done in Venezuela.