A Lesson from Abortion Protesters 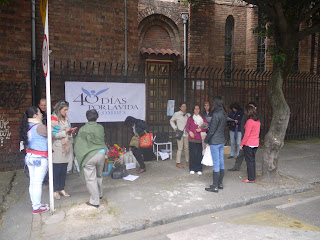 Abortion opponents have been holding this protest/vigil recently beside the Iglesia Santa Ana in Teusaquillo, which is surrounded by women's clinics with a reputation for providing mostly illicit abortions.

In the past, I've seen anti-abortions protests outside the Palacio de Justicia and Congreso, when they have considered abortion law. Colombia's abortion law, while relatively liberal for the region, is still quite restrictive (abortion is permitted only in cases of rape, incest, when the woman's life is endangered and when the fetus is inviable, and often hard to obtain even in those cases). Abortion rights supporters say that, either despite or because of the law, nearly all of the procedures performed in Colombia are done illegally.

So, it always seemed a bit absurd to me to see the protesters at the centers of lawmaking, when the law was obviously so irrelevent to reality.

This is the first time I've seen protesters at the of abortions. Yet, by protesting here, they're also underlining the fact that abortion prohibitions feed an outlaw, and often dangerous, illicit abortion industry. 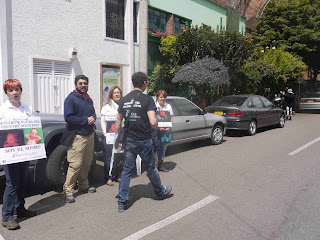