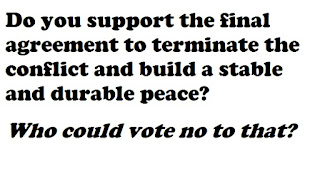 On October 2, Colombians will vote up or down on the peace agreement with the FARC guerrillas.

However, the question on the ballot will ask something a bit different.

"Do you support the final agreement to terminate the conflict and build a stable and durable peace?"

The referendum question doesn't mention the guerrillas, because the government know that would generate lots of public rejection. And, whether the deal will really end the conflict is very dubious. The smaller ELN guerrilla group has not entered negotiations, and a grab-bag of criminal groups and right-wing paramilitaries are still out there, eager to swoop in and occupy the FARC's territories and take over their drug trafficking, illegal mines and other businesses. In fact, El Tiempo reports that the ELN and criminal bands are already moving in.

Colombia, sadly, has structural problems which have scarred its history with violence and won't likely go away thanks to a few signatures and FARC guerrillas' turning in their weapons. The country has huge areas with little government presence and fortunes in illegal money waiting to be scooped up. And its high poverty rate and lack of good jobs - particularly in rural areas - supplies many unemployed young men willing to risk their lives and freedom by joining violent, illegal organizations.

But the government is determined to see the peace deal approved, in part because Pres. Santos' legacy is riding on it. Thus, the 'biased referendum question,' as La Silla Vacia suggests. Most of the rest of the Colombian media, which is cheering for a SI vote, naturally ignores this issue.

La Silla Vacia also points out that the election's rules are tilted in favor of the government and the SI vote. In particular, government resources such as telephones and vehicles can be used to campaign, and since the Santos administration favors the SI, they'll be used mostly that way.

The peace deal also has severe flaws, to which the government and media has given little attention. The most glaring of these are the human rights issues. FARC members who've committed grave crimes will have undergo only a mostly symbolic punishment just as long as they confess their crimes. These people will even be eligible to serve in parliament, where the FARC will have ten guaranteed seats.

Despite the flaws and the biased question, the peace deal may be a good thing for Colombia, if it at least reduces levels of violence. But nobody should expect it to cure all the nation's ills. Colombia still has lots of work to do.

While the biased question may help SI win, it also undermines the referendum's legitimacy and may make the outcome less legitimate in the eyes of Colombians and international observers.