A Look Back at Rogelio Salmona

If you've lived in or even just visited Bogotá, you've seen the work of architect Rogelio Salmona - or at least his influence.

Born in France in 1939 to a Jewish family, Salmona's family emigrated to Colombia in 1931. In 1948, in the wake of the Bogotazo riots, Rogelio moved to Paris and spent a decade working with famed architect Lecorbusier. He returned to Colombia in 1958.

Salmona, Colombia's most famous architect, loved to work with brick and incorporated lots of curves into his buildings. In a socially striated nation where many are paranoid about crime, Salmona integrated his apartment
complexes into their surroundings, rather than walling them off. Salmona also designed the Virgilio Barco Library in north Bogotá, the graduate studies humanities building on the Universidad Nacional campush, and the Nueva Santa Fe apartments and the neighboring Archivo General de la Nación, both just south of La Candelaria, as well as many others.

Walking thru many of Salmona's works, with their curving lines and stepped pools of water, gives one a sensation of a visit to an Arab desert oasis. And in fact, Salmona spent time in northern Africa. 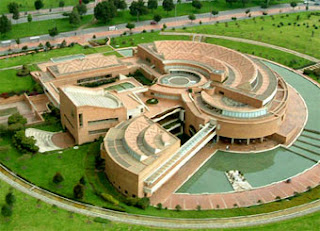