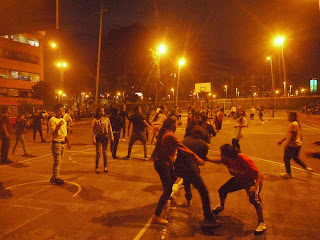 Colombia is futbol country. Across Bogotá, the football pitches are usually crowded, while the few basketball courts often sit empty - except when they're being used to play football.

There are a few exceptions, such as the Parque Nacional, Parque La Florida and El Salitre on Sundays. And, on my way home this evening; I passed thru Tercer Milenio Park and came upon this scene: 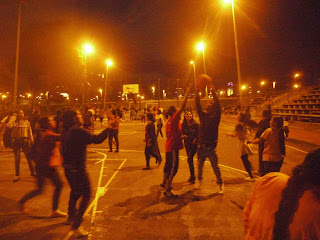 On Sundays, Tercer Milenio seems to be transformed into Ecuadorean territory, probably because 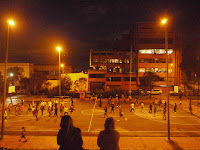 many Ecuadorean immigrants live in the poor neighborhoods around it. And it was moving and startling to see dozens of boys, girls, men and women playing basketball. Women played in long dresses. They played three games simultaeneously on the same court, banging into each other. They played badly and without rules - but very enthusiastically. This was the real spirit of sports, and something which millionares like Lebron James and Cristian Ronaldo could never equal.

Whyever it is, I found it heartwarming, and for a little while it cleared away my despair about the state of our world. 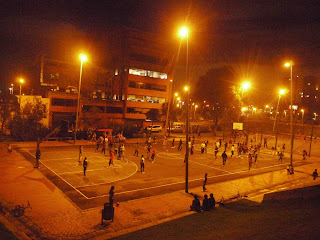