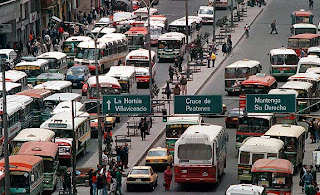 While bogotanos were transfixed by a soccer tournament in South Africa, back home something very boring happened, but which might actually affect people's daily lives.

That was the beginning of the process to create a unified bus service system in Bogota, to be named the Integrated System of Public Transit, or SITP. In it, the private buses, Transmilenio and a planned metro would have a combined fare collection system, using an electronic fare card system, and bus lines would be reorganized to favor efficiency rather than individual profit. Some 8,000 older buses are also to be junked, ending the city's excess bus capacity.

It's glaringly obvious that Bogota needs to tame its thousands of private buses: they're old, polluting, sometimes dangerous, chaotic, loud...and add any more ugly adjectives you like. However, according to Ricardo Montezuma, head of Ciudad Humana, a progressive urban planning company, and ex-Bogota mayor Enrique Peñalosa, the SITP plans are deeply flawed. Several months ago, the city's private buses went on strike against the planned new system, forcing the city almost to a standstill. City Hall ended the strike by promising the private bus companies a bigger slice of the profits of the planned system.

Those additional costs, say Peñalosa and Montezuma, may come from the pocketbook of the city's poorest citizens. And, because the plan involves dividing the city into 13 regions and contracting the bus lines in each individually, the system may encourage short bus runs with lots of inconvenient transfers. 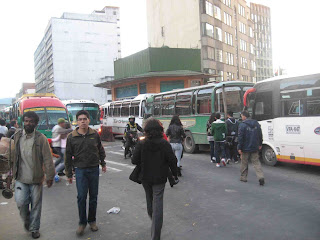 But, whatever the system's flaws, it's gotta be better than the current state of affairs, as this commentary argues. But let's hope that Bogotá learns from Santiago, Chile's disastrous introduction of a similar system.