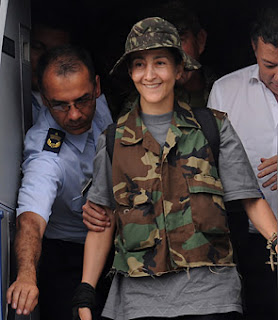 So, a presidential candidate and her running mate venture into guerrilla-prowled territory to campaign. The pair get kidnapped by FARC guerrillas and held in the jungle for six traumatic years. Finally, they are rescued by the military in a daring operation.
And now, the ex-candidate, French-Colombian Ingrid Betancourt, is demanding compensation from....the government.
Yes, you read it right. From the folks who rescued her, not the terrorists who kidnapped her.
Betancourt argues that the government didn't provide her with adequate protection and that it should have negotiated her release. Whatever the level of protection, Betancourt entered the region knowing that the guerrillas were there and that they sometimes kidnapped prominent people. She even signed a document accepting the dangers of venturing there.
Betancourt isn't the only one demanding compensation for a kidnapping ordeal. But, unlike some other politicians, she seems to have almost set herself up to become a victim. Three U.S. citizens and U.S. government contractors who were kidnapped after their small plane went down on a coca plantation-hunting flight and later rescued with Betancourt are suing Chiquita Corp. because of protection payments the company made to the guerrillas.
This blog written by Mike Ceaser, of Bogota Bike Tours
Publicado por Miguel en 5:45 PM