Chapinero is one of Bogotá's largest neighborhoods, and well known for its nightlife, shopping and gay community. The best known nightclub is probably the Theotron. For a conservative, Catholic nation, Colombia has surprisingly progressive laws for same-sex couples: they can register civil unions, inherit from each other and receive each other's pensions. However, strangely and shamefully, and perhaps due to oversight, Colombia recently abstained during a United Nations vote which removed the category of sexual minorities from a list of groups which member nations were called on to protect from extrajudicial killings. 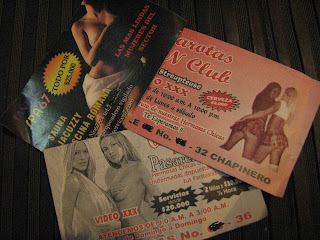 Chapinero has its own red light district, or 'zona de tolerancia.' Tarjeteros on streetcorners hand out cards like these. Most strip clubs, of course, double as brothels, whether legally or not. I once had a neighbor who actually managed one of these places. He said that many of the girls who worked there were university students paying for their educations. He said that others were married, but that their husbands actually didn't know what they did for a living. Undoubtedly, my neighbor told me only the 'positive' side of the business, and there must be lots of exploitation and child prostitution as well.


More Chapinero scenes: the man who begs with dogs and the musicians' beach.