The Displaced Demand their Rights

A group of several dozen displaced people have been demonstrating on Plaza Bolivar every morning, demanding that the government give them land and other benefits they say they were promised.

Displacement of peasants by Colombia's armed groups is one of the country's largest and least-visible tragedies. Carlos, who was carrying a poster this afternoon, said that his group came from the department of Cauca, near the Venezuelan border. There, he said, his family had raised pigs and chickens and grown bananas and yucca until they were driven from their land by the Aguilas Negras, or Black Eagles, armed groups which many say have taken the place of Colombia's vicious right-wing paramilitary forces. Like the paramilitaries, the Aguilas traffic drugs, but they appear to lack the paramilitaries neo-fascist politics or their hostility to the leftist guerrillas.

Carlos said people in his group had been driven off of their land by leftist guerrillas, right-wing paramilitaries and even government forces. Often, these armed forces accuse peasants of being allies of their enemies.

Some estimate that there are four million displaced people in Colombia - nearly ten percent of the population. But numbers are inexact, because many of the people slowly integrate themselves back into society. 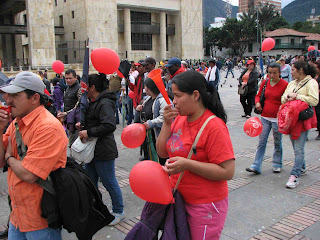 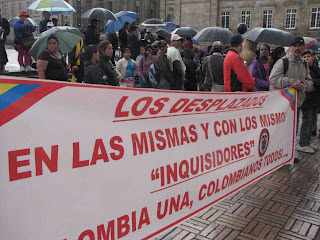